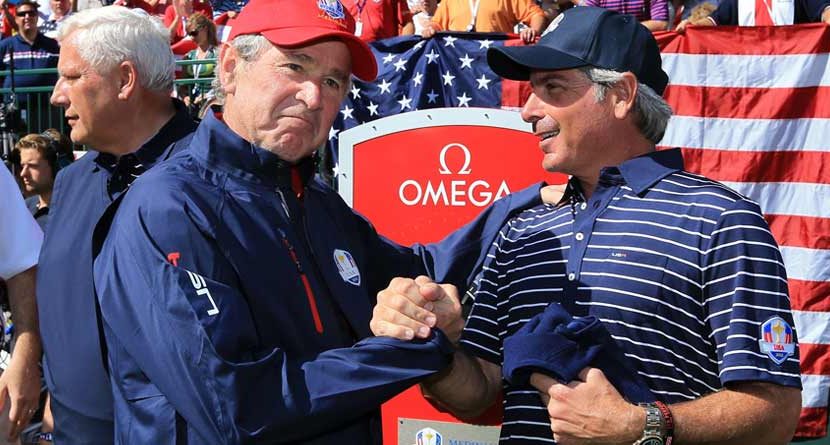 Here’s one for all you “Jeopardy!” fans out there: “NFL stadiums, corn crops in Iowa, gasoline and Sesame Street.”

If you rang your buzzer and said, “What are things subsidized by the U.S. government, Alex?,” then you win $200, even though my name is not Alex.

The point is, the American taxpayer pays for all kinds of things and it’s about time we asked: why not golf?

After all, if Uncle Sam (or his state and municipal cousins) can prop up the NFL by allowing tax-free loans and public expenditures on stadiums, then surely that bearded old bastard can subsidize the greatest game in the world.

Here’s how it would work: the U.S. government would pay for a portion of all golf course construction and greens fees to keep the cost of golf low, therefore encouraging more people to play. To me, this makes sense for a few big reasons:

It promotes lifelong health. Golf is a sport that can be played well into old age, promoting exercise for a populace that can’t stop gaining weight. By comparison, there’s a reason there’s no Senior NBA: other sports are just too hard on the body. Just like the government looks out for our safety by requiring seatbelts, kicking in some money for greens fees could promote continued health and wellness.

It stimulates the economy. This game requires expensive equipment, specific clothing and constant expenditures on golf balls. By contrast, sports like running and aerobics are essentially free–I can go into my backyard and do jumping jacks for free (and I do). But by encouraging golf, the government could be a bigger job creator than Mitt Romney.

It builds character. All cheesy golf commercials aside, golf teaches you self-control and discipline in a way that climbing a rope in gym class does not. If more citizens played this game that requires a cool head and strategic decision-making, we could be more intelligent and finally answer that age old question, “Are You Smarter Than a 5th Grader?”

Whether you think the government should be paying for things or not, the fact is, it’s already happening. And as the wealthiest country in the world, we’ve got plenty of money for everything we want to support: we can blow money on new tanks and aircraft carriers while we also support PBS. We can give tax breaks to banks and also build public parks. Subsidies are as American as baseball, apple pie and Kid Rock.

So listen up, lawmakers. Instead of squabbling over social issues or debating health care, let’s put some bags of cash in golf carts and drive ’em to our local courses. Let’s trade earmarks for ballmarks. Let’s build fewer Bridges to Nowhere and more Sarazen Bridges. And let’s start putting our money towards the thing all Americans can agree on: having other people pay for the things we like.