When & When Not To Use the ‘Out Clause’ 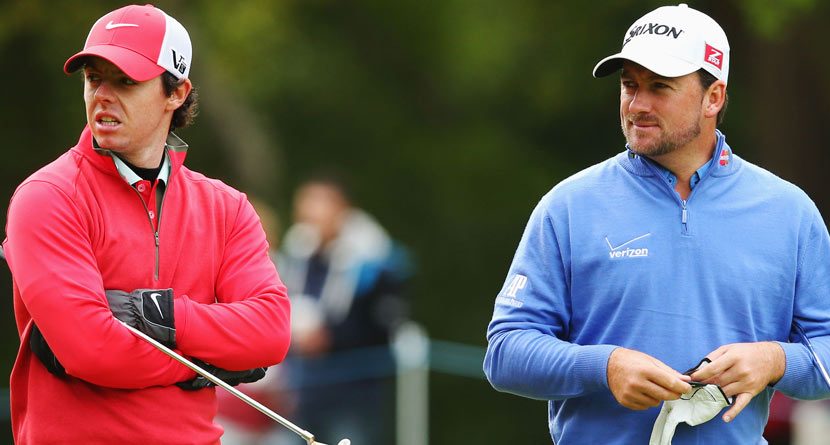 Rory McIlroy supposedly skipped Graeme McDowell’s Bahamas wedding this past weekend to shoot a Nike commercial. Obviously a wedding is a very momentous life event and hopefully it only happens once for Graeme. But since Rory had to work it for the cameras, so to speak, I would give him a pass on this one. He probably had zero say regarding the commercial shoot date.  A lot of times the production schedule get moved around and who really knows what happened, besides Rory himself.

Unfortunately that’s just the nature of the biz. Unlike a typical 9-5 job, Rory can’t exactly request certain dates off to fly down to the Bahamas. He’s contractually obligated to work when Nike says “lights, camera, action.” I’m sure he tried to make it up to the newlyweds with a lovely gift. His girlfriend Caroline Wozniacki tweeted her well wishes: I think that certain (understandable) “out clauses” can be applied when it comes to missing events. And work is totally excusable in my book. If you gotta work, you gotta work. And like Britney Spears says, “You better work b**ch!”

Financial pressure to stay ahead is a pretty good motivator to keep one gainfully employed. I would advise to just be upfront and honest about it to your friends if you are going to miss something. Let them know as soon as possible that the date conflicts. Of course, it never hurts to ask if your employer would let you have the day off. You never know.

But more on the “out clause.” I think that at some point every guy has been faced with having to choose between having a bros night or thinking they have to hang out with their girl to keep them happy. This can be a tough call but (I’m trying to drill this into your head here) as long as you are upfront and honest, I think you are safe.

From a girl’s perspective, I say just let me know your thoughts sooner rather than later so I can make my own plans. I would never want my guy to miss out on having fun with his friends; especially if it was something awesome like watching baseball playoffs (which only happens once a year in October). And I would never want him to feel obligated to hang out with me either. Hello: Quality over quantity.

But let’s say there was something important I was counting on him for, such as accompanying me to my friend’s wedding. Even if you have awesome seats and free tickets to the game, sorry, you are missing that one. He, in that case, would need to use the out clause of “happy wife, happy life!”

It really is a case-by-case situation when it comes to using an “out clause.” Certain instances are trickier than others but again, repeat after me: “As long as you are upfront and honest, you will be fine.” And remember, it goes both ways too. The “out clause” is very compromising. If it’s a guy’s best friend’s bachelor party weekend, but his gal’s work friend is having a cocktail party, guess what? Bros before … well you know the rest.