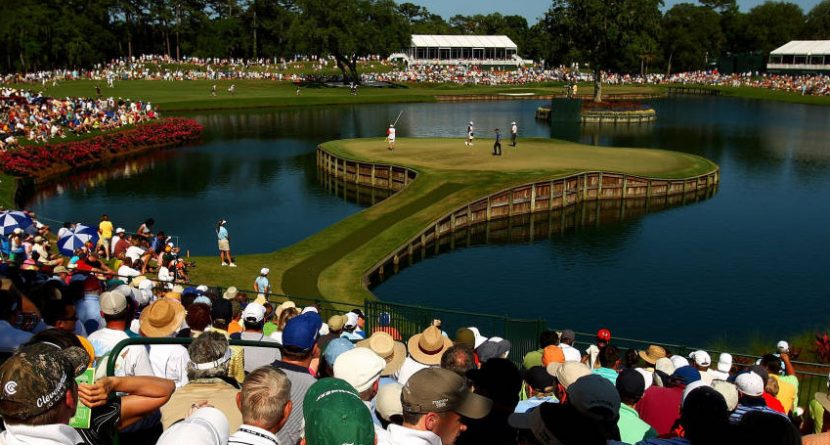 “Do you feel uncomfortable?” the Hall of Famer asked.

McGuinn was ready with a snappy reply. “Should I?” he said.

Considering the iconic island green at No. 17 on the Stadium Course at TPC Sawgrass beckoned, the two men ahead of him had rinsed their attempts and Player’s discerning eye stood yards away – well, why wouldn’t the chairman of banking giant BNY Mellon feel uncomfortable?

“I didn’t want to admit that I was,” McGuinn said Sunday. In that moment on the tee, addressing a group of restless shareholders might have seemed more relaxing.

That was part of the intrigue of the iGate CEO Cup, sending nearly two dozen corporate top dogs to take on the challenges that bedevil many a PGA Tour pro each spring during The Players Championship.

They even spent the weekend playing for money – with $100,000 on the line to be divvied up among charities designated by each winner.

“The big numbers lurk out there, all over the place,” said Chip Perry, CEO of AutoTrader.com who now holds distinction as the event’s first individual champion.

Perry, a 7 handicap who makes Atlanta his base, shot 84-80 over two days to claim the 21-inch gold trophy that threatened to create issues with the overhead storage bins on the flight home. That is, if he was even flying commercial.

“To compete at this venue, on this stage, blew away all my expectations,” Perry added. “Just the chance to compete was a privilege, and to win was something I never dreamed of.”

Undoubtedly, these executives are familiar with pressure. The competition is aimed at companies on the Forbes Global 2000 list, though some exemptions were handed out to beef up the inaugural field.

In their offices, million-dollar decisions are handled with confidence. A chip from just off the green, though, is less assured.

As with any tour event, the weekend brought its share of tales of calamity, missed chances and ones that simply got away.

Bill Dillard, CEO of Dillard’s department stores, grew hopeful of staying dry at No.17 as his shot easily cleared the water in front – only to hit the green and one-hop off the back. Next came AppSense CEO Darron Antill, whose attempt had Player barking “One more yard!” but needed two more yards to make land.

Those were the images McGuinn tried to wipe away as he stuck his tee in the ground. Yet even after Player’s interruption, the Pittsburgh exec found the front middle of the massive putting surface.

“You see them tee the ball up, and they’ve got a little shake,” Player said. “So I make a big fuss when they hit the green. That’s what they deserve.”

The CEO Cup is the creation of Phaneesh Murthy, president of technology consultants iGate, as a way to mix high-level networking with some charitable competition.

“It’s an environment where we can have a lot of fun and there’s no pressure – except the pressure of competition,” he said.

Noting the $100,000 in charity donations at stake, Player called the event “the most unusual competition I’ve seen in 20 years.”

“It’s great to see them choking a bit for that kind of prize money,” he quipped. “They’re getting a little taste of what we go through.”

Basketball Hall of Famer Julius Erving plays a half-dozen or so celebrity events and pro-ams each year, but this time his celebrity status was trumped by his role as CEO of Dr. J Enterprises. Not that he could take advantage of less athletic competition.

Unable to prepare because of a sore back – tweaked while playing hoops with his son – Erving took his fortune in good humor. When Sunday’s tee shot at No.17 caromed off the front bulkhead, someone in his foursome suggested he tee another.

Erving headed to the drop zone. “I’ve been tormented enough,” he said in mock weariness.

“I had a good time,” Erving said. “We won’t be going home with the cup, but hopefully we made enough friends that we’ll be invited back next year.”

Perhaps the best testimony, though, came from Mark Wright. The president of marketing services firm Targetbase was the first-day leader, but struggled on Sunday – including watery results on Nos. 16, 17 and 18.

But a well-struck third shot at No.18 scooted to the back of the green, and he salvaged bogey after draining a 10-foot finisher.

“I’ve played in the Colonial [pro-am] twice and Byron [Nelson Championship’s] a couple of times,” said the Dallas-based exec, who still took home the title for low net score. “I had more fun in this.

“We’ll definitely be telling some other people about the time we had here. I think it was a great time.”