Why Not:~What Golf Can Steal from Other Sports 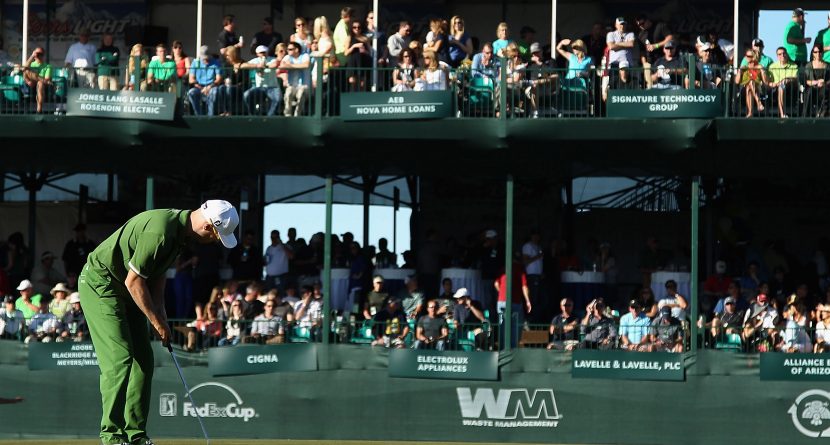 In the words of the late Robert F. Kennedy, “Some people see things the way they are, and ask why. Some people see out of bounds left, water on the right, pull driver anyway and ask, Why the hell not?”

That’s what I’m doing with this new column: coming up with crazy golf ideas and asking the same question.

Golf can be kind of boring, and I say that as someone who’s in love with the game. You know what major sports are more flashy and more interesting? All of them. So here in the inaugural “Why Not,” I’ve got four suggestions for how golf can borrow other sports’ ideas for maximum excitement.

Currently, player introductions are about as exciting as a trip to the library. An old man calmly says, “Ladies and gentlemen, Tiger Woods,” and then everyone claps politely. What if instead, a booming announcer voice screamed “Tiger Woods!” and then Kanye West’s “Can’t Tell Me Nothing” blared? The best part would be the surprise of finding out what each player chose for their intro music. Facing semi-retirement, Steve Stricker might march to the tee as Papa Roach’s “Last Resort” rocks the crowd. Hopeless romantic David Toms would sashay through the gallery as John Mayer’s “Your Body is a Wonderland” rang out. The possibilities are endless and amazing.

The hard-asses of the hardcourt have it right: every time they win, they fall to their knees and cry like they can’t believe what just happened. (Dude, you were only playing one guy. You had a 50-50 chance.) Point is, though, they make victories seem important. I would encourage players to ham it up when they seal the deal: dancing, spiking their golf ball, throwing things into the crowd—nothing would be too excessive. An especially good celebration might earn extra cash from the commissioner.

Basketball: Nonstop action on the court

We live in an age of never-ending stimulation. We play on our computers while watching TV and check our smart phones while going to the bathroom. In contrast, pro golf has a ton of moments where literally nothing is happening. To solve this, I’d steal an idea from the NBA and create nonstop spectacles. In the same way that cheerleaders and mascots run onto the court during even the shortest timeouts, I’d have people ready to entertain the gallery as soon as a group of golfers putts out. Are you telling me you wouldn’t cheer for some 5-year-olds as they compete in a quick putting contest on a Tour-quality green? Or watch a sand artist create a small castle scene in the bunker before the next group hits their approach shots? Your life would never be the same.

Golf borrowing an idea from itself? Yes, anything can happen in “Why Not.” The game already does a good job of getting players involved in pre-event publicity stunts, but most of these are driven by players’ sponsors and not by the Tour. I’d change that and make each player take part in at least two weird events per season. What kind of events? The kind you’d want to watch: before Chicago’s BMW Championship, I’d hold an Italian beef sandwich competitive eating contest. Before the John Deere Classic: a tractor race. Best of all, the networks would film these and include them in their Saturday broadcasts. Jim Nantz could fill 10 minutes of airtime just salivating over those sandwiches.