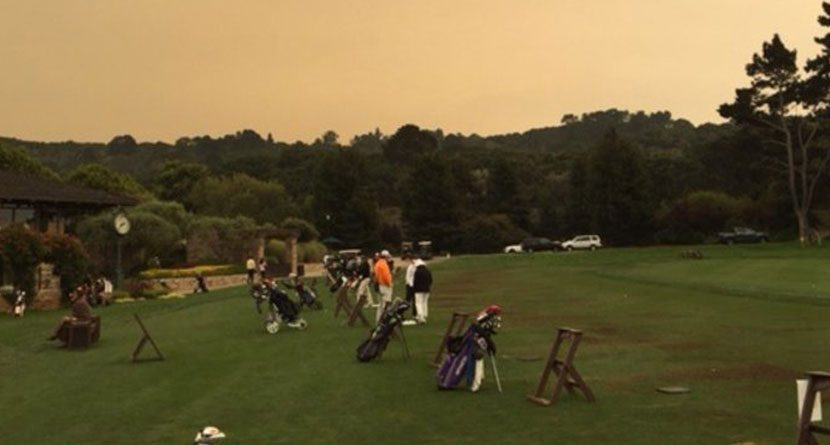 The Soberanes Wildfires are wreaking havoc on parts of California nearing the Monetery Peninsula and golfers playing the famed golf courses off of scenic 17-Mile Drive are seeing the effects.

Unfiltered view of Pebble Beach Golf Links’ 18th hole right now. The fog and smoke making it surreal. Keeping everyone affected by the Soberanes Fire in my thoughts. Thank you to all the fire personnel who have come to help us. Stay safe.

The Soberanes wildfire that has burned about 20,000 acres south of Carmel is casting a smoky pall over the area and has affected the air quality as far as the San Francisco Bay area to the north and to the Lake Tahoe/Reno area to the east.

“It’s relatively close,” John Pietro, director of golf at the Preserve Golf Club in Carmel, east of the fire, said. “The air quality is not good, probably an orangish red.” California Department of Forestry and Fire Protection has issued an evacuation order for parts of the Santa Lucia Preserve on which the golf course is situated.

A short distance northeast of the fire is the Quail Lodge and Golf Club, site of the 50th California Women’s Amateur Championship that began Tuesday.

Firefighters say they only have 10% of the fires contained and hope to have everything under control in two weeks.

I’m getting ashed upon at Quail Lodge from the fire in the Carmel area. I’ll have to put up my umbrella soon! pic.twitter.com/bFSR8aDRex