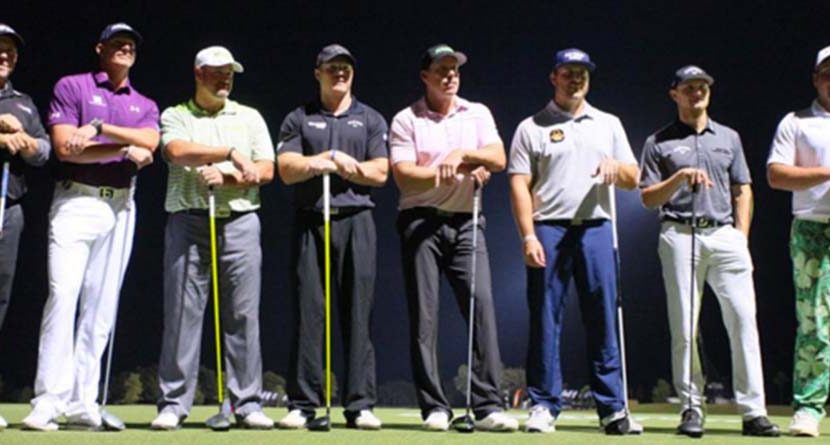 The world of professional golf is often misrepresented as a weekly convoy of private jets flying to the best courses in the world where grown ups play a game for millions of dollars. While that may be true for a select few near the top of the Official World Golf Rankings, the vast majority of golf professionals, from club pros and mini tour guys, all the way up the fringe of the PGA Tour, are guys and girls doing their best to cut costs and make ends meet on a weekly basis.

The long drive circuit is no different. As the Golf Channel airs wall-to-wall coverage of this week’s World Long Drive Championships, know that while the guys that you see on TV can almost assuredly outdrive you, the majority of them are working stiffs, just like the rest of us.

The competition enters its final night on Oct. 21 with eight quarterfinalists squaring off in a modified match play format for a $500,000 purse, $150,000 of which goes to the winner.

Jamie Sadlowski, one of four No. 1 seeds in the 64-man bracket, is the most well-known long driver on the circuit and because of that he is an outlier. The Callaway-outfitted 27 year old makes his living as a golf entertainer. Sadlowski has been able to translate his two world championship wins into a career as a trick-shot artist and long drive aficionado.

While most, if not all, of the long drivers in the competition do side gigs showing off their unique ability, few can turn over enough cash to rely upon it as their main source of income.

For example, there are guys among the Elite Eight that ply their trade in the instruction side of golf industry such as Jason Eslinger and Jeff Crittenden. Eslinger is an assistant golf professional in Stillwater, Okla. and Crittenden is the owner and director of instruction at the North Carolina Golf Academy headquartered in Greensboro, NC.

Others competing in the biggest long drive event of the year make their living in a more traditional way. Jeremey Easterly and Will Hogue do their part to protect their respective communities. Easterly is a police officier in the Jacksonville (Fla.) Sheriff’s Office and Hogue is a reserve fire fighter in the Germantown (Tenn.) Fire Department. Hogue also works in management for a billboard company in Germantown, a suburb of Memphis.

So, remember when you see one of these eight guys hugging their family and friends after claiming the 2015 World Long Drive Championship, despite the oversized $150,000 check and the coveted professional wrestling-inspired championship belt, they all have jobs that they need to report to on Monday morning.