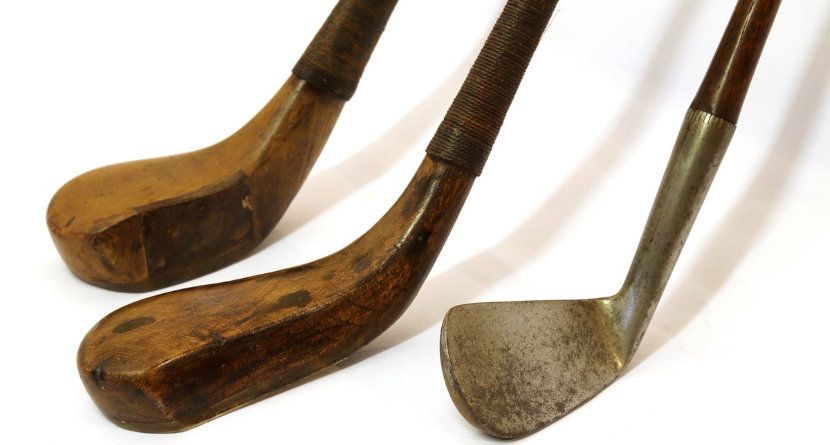 It might be hard to believe, but before the days of tungsten and titanium, woods were made of real wood and irons were made of iron. Crazy concept, right? Well, now is your chance to own a piece of golf history. Bonhams, the world’s largest and most renowned auctioneers, will put one of the world’s finest, and oldest, private collections of early golf clubs in the world up for sale in late March. The clubs are part of the Roberto Family Trust Golf Collection and are currently estimated to fetch between $700,000 to $1,000,000.

Will Roberto, curator, said, “Putting together this collection has been a wonderful, absorbing hobby which has given me decades of pleasure. The time has now come for a new generation of collectors to enjoy these fascinating objects.”

Here’s a look at the items that will be up for sale: It is one of only eight such clubs known to exist, most of which are in institutional collections. Missing a shaft, now replaced, the toe iron lay overlooked in a box of tools for 50 years. The club is one of the oldest of its type known, Bowmaker’s were commissioned to craft wooden headed clubs. This blacksmith made club weighs 24.1 ounces. It has an exceptionally large face and imposing hosel, and the original sheepskin grip is inscribed in ink, ‘Heavy iron’. Johnny Laidlay was a Scottish amateur golfer who invented the overlap grip, which is the one of the most popular golf grip used today. While the grip is credited to Harry Vardon, it was actually Laidlay who came up with the concept. He was the British Amateur Champion in 1989 and 1891, won over 130 amateur medals during his playing career. He has been called the ‘last of the gentlemen golfers’.

For more of this amazing collection, head on over to the next page.