You Have To Be Crazy & Rich to Golf in Afghanistan 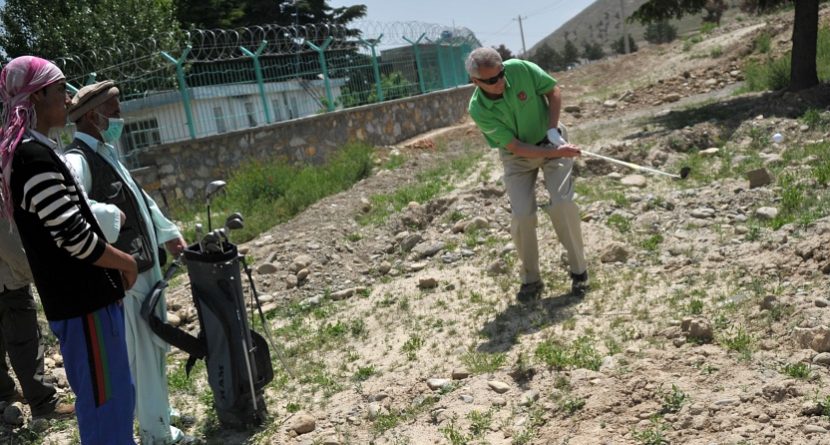 Sometimes you have to be a little crazy to get rich. That doesn’t necessarily mean the craziness stops once you are rich, though.

To wit, a company in Miami called Cavalry and Company is offering extreme and expensive golf adventures. For the price of a luxury car or many common folks’ annual salary ($40,000 to $80,000), you could take a five-day excursion that starts with golf in Dubai at resorts like Jumeirah Golf Estates.

“Our clientele are people who have $10 million-plus in assets, which is a growing number now, and who are looking for the experience of a lifetime,” Cavalry and Company co-founder Ross Thompson told the Miami Herald.

But if you’re adventurous, or have a bit of a death wish, you could hop on a private jet and fly to Kabul, the capital and largest city in Afghanistan. Upon landing there, a decommissioned Soviet Mi-8 military helicopter will take you to the Kabul Golf Club, where armed guards will walk with you during your round. “In Kabul, it’s very dangerous to travel by road, which is why the helicopter is necessary,” said Cavalry co-founder Horacio Ortiz, a veteran security consultant and military-trained sniper. “The airport only operates during the daytime, so we have to get in early and out before sunset.”

Now, maybe a journey into one of the most war-torn parts of the world would be worth it to play one of the most immaculate courses in the world. That’s far from the case, though. Kabul Golf Club was reopened in 2004 after nearly 25 years of war, and it still features more dirt and rocks than grass. In fact, your caddie will put down a patch of artificial turf so you don’t tee off on rocks.

“You can see on the course where mortars have exploded,” Ortiz said. “Sometimes you don’t know whether to take out a golf club or a shovel.” But the thousands of dollars you pay to play this dilapidated course could bring it back to life. Calvary hopes that the business it brings in will help the club afford an irrigation system.

If Kabul sounds a little stressful, but you’re itching to get out of Dubai, Calvary can take you to Beirut instead.

“We will have no problems in Beirut,” Ortiz said. “We have good, trustworthy contacts there. We can even spend the night there if clients want.”

Ortiz, the trained sniper, leads these trips and brings with him others who have weapons and combat experience. And he’s not oblivious; he knows violence is a part of everyday life in these parts of the world. For what it’s worth, the U.S. State Department warns against Americans traveling to Afghanistan and Lebanon. “Kabul remains at high risk for militant attacks, including vehicle-borne improvised explosive devices, direct and indirect fire and suicide bombings,” the government says.

But that risk is exactly what Calvary is selling, and it wants to provide the reward.

“There are a lot of rich people in the world who do not know what to do with all their time and money,” Ortiz said. “They can say to their friends, ‘Have you ever played golf in Afghanistan? Have you ever played a round in Hezbollah’s neighborhood? Well I have.'”