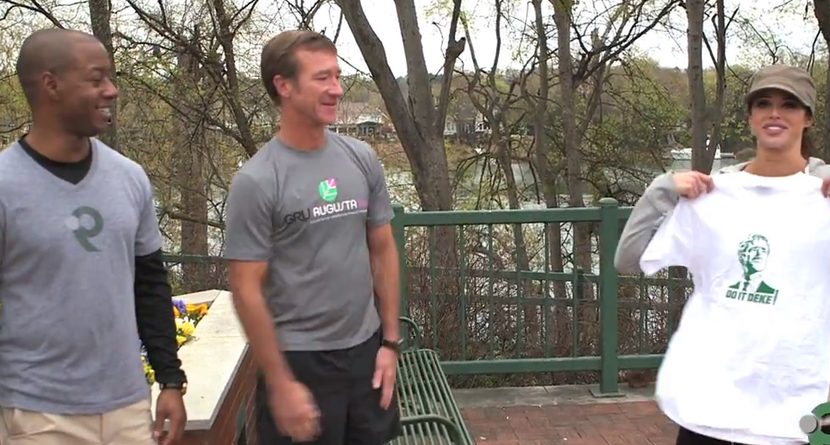 When Augusta mayor Deke Copenhaver turned to Charles and asked him what he was doing wearing khakis, I immediately realized two things: first, I should have told Charles that we were going on a running tour with the mayor that day, and second, this guy could be the coolest mayor in Georgia.

We met Deke at the Riverwalk on a Thursday afternoon along the Savannah River near the city amphitheater, one of those pockets of history and beauty that you’ll find all over town. It was cooler than usual that day, which was good because I knew I would be running on camera, and I sweat more than anyone else I know.

The first thing I noticed was the enormous presence of antebellum homes along the river. In the springtime you can’t ask for a more peaceful panorama. I could imagine people sitting on their porches, ice tinkling in their cups of lemonade, listening to the afternoon breeze blowing through the weeping willows. And for people who have kids or jobs, enjoying an average glass of wine and falling asleep to “The Apprentice.”

I was surprised by how young and personable Mayor Deke was. His enthusiasm for his town is infectious — from the Masters Tournament, which put Augusta on the global map decades ago, to the annual Half Ironman competition that draws a crowd of thousands from around the world. And on top of his enthusiasm, Deke wants everyone to love his town as much as he does. It’s a pride and warmth that is shared by his constituents in Augusta.

No matter where you come from, they make you feel like you’re at home. And as a transplant from the Midwest to New England, I miss that feeling; you can’t really put your finger on it — you just feel a sense that you belong. It’s in the fiber of an Augustan — you don’t have to prove to anyone that you’re worthy of attention or a conversation. You’re worthy because you’re there, sharing the same space. It’s as simple as that.

So Augusta, I raise a glass of lemonade and toast to you — a town of many talents, and just as many wonderful people.