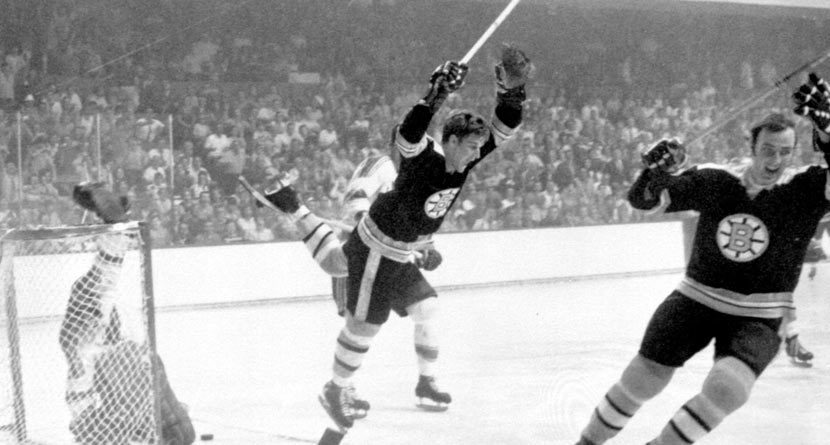 As the PGA Tour and FedExCup playoffs move from the Big Apple to Boston, it’s time to take a look at some of the greatest sports moments in Beantown history. Except for maybe New York, there are few other cities where the sports history is as rich as it is in Boston. With names like Orr, Williams, Yastrzemski, Bird, Russell, Brady and Belichick, you might not think golf would crack this list, but that wouldn’t be true.

Much like last week with The Barclays just outside New York, we know that the Deutsche Bank Championship isn’t technically played in Boston, instead being held less than 40 miles outside of the city limits at TPC Boston in Norton, Mass. But the Patriots are always included when you talk about “Boston” teams and they play their home games in Foxborough — so there you go.

Also, I thought about adding Keegan Bradley’s win at the 2011 PGA Championship to this list but I didn’t. You can look for that (spoiler alert!) in the “11 Most Memorable Atlanta Sports Moments” in a couple weeks.

In 1975, the Boston Red Sox were in the 57th year of what ended up being an 86-year stretch of World Series futility when they squared off with the Reds in the Fall Classic. Boston came into Game 6 of the 1975 series needing a win to force a decisive Game 7 at Fenway Park. After 11.5 innings of thrilling baseball, catcher Carlton Fisk provided the lift the Sox needed and a moment that will live forever:

Fisk’s homer instantly became part of the fabric of Boston sports history — that moment of desperation-turned-unbridled-joy has since been imitated by every baseball-playing kid born in New England since 1970. It was even part of Robin Williams‘ Oscar-winning performance in “Good Will Hunting” (caution: some language is NSFW):

Perhaps the first time golf ever made headlines in the United States, the news came out of Boston — The Country Club in Brookline, to be exact. In 1913, golf was still a super elite game that wasn’t overly popular among the middle and lower classes. Francis Ouimet wasn’t born of means and worked as a caddie at the club where he would eventually become a legend. At the U.S. Open that year, Ouimet — as an amateur and with the help of his 10-year-old caddie Eddie Lowery — went toe-to-toe with Harry Vardon and Ted Ray, two of the game’s greatest players at the time. Ouimet forced them into an 18-hole playoff that he would win by five strokes. His victory is still celebrated as one of the greatest upsets in sports history.

In 2004, the Boston Red Sox found themselves in a hole that no team had ever dug itself out of, and based on their history, no one could’ve imagined they would. Just one year removed from Game 7 heartbreak at the hands of their heated rivals — the New York Yankees — the Sox found themselves trailing 3-0 in the American League Championship series. Over the course of four wild and magical nights that October, and with the help of David Ortiz, Curt Schilling, Dave Roberts, Kevin Millar, Johnny Damon and the other self-proclaimed “idiots,” the Red Sox played out of their minds, generating classic moment after classic moment. Thus, they earned the team’s first trip to the World Series since 1986.

For all the times the city of Boston has celebrated one of their teams’ triumphs in the streets, they’ve also dealt with years of heartache. I mean years. In 2011, the Boston Bruins found themselves in the Stanley Cup Finals against the Vancouver Canucks with an opportunity to win their first title in 39 years. In the decisive Game 7 in Vancouver, Bruins goaltender Tim Thomas “stood on his head” in net and Brad Marchand scored twice en route to a 4-0 win and the first Stanley Cup title in nearly four decades for the B’s.

In 2007-08, New England Patriots fans experienced (most of) a season that any fan would die for. “Tom Brady to Randy Moss” became the popular refrain during that fall and winter in New England with both players tearing up the record books. The team set its eyes on a perfect 16-0 regular season. All of this came to a head on Dec. 16 at Giants Stadium in New Jersey. Despite facing their most fierce test of the year, the Patriots held on to win 38-35 to give them win No. 16 and the first undefeated regular season since the 1972 Miami Dolphins. During the win, Brady hooked up with Moss on a 65-yard touchdown pass early in the fourth quarter, giving Brady his record 50th touchdown pass of the season and Moss his record 23rd touchdown reception.

The All-Star Game at Fenway Park in 1999 was one of the most memorable in history, thanks to the Home Run Derby the night before, the unveiling of the “All-Century Team,” and Ted Williams’ emotional appearance and first pitch. Once the game started, however, it was Red Sox ace and hometown favorite Pedro Martinez who stole the show. In the midst of an incredible season that culminated in a Cy Young Award for Martinez, he started the game and faced five of the game’s best players and two of the most prolific home run hitters of all-time — Sammy Sosa and Mark McGwire. In two innings of work, Martinez fanned five — including Sosa, McGwire, Larry Walker and Hall of Fame shortstop Barry Larkin.

The 1984 NBA Finals featured some of the greatest basketball ever played and the league’s two brightest stars at the time: Larry Bird and Magic Johnson. The two began their rivalry during the the 1979 NCAA Men’s Basketball Tournament when Johnson’s Michigan State squad defeated Bird’s Indiana State team. This time around, Bird got the better of Johnson as the Celtics collected championship No. 15. The series included nine other eventual basketball Hall of Famers — including Bob McAdoo, Karem Abdul-Jabbar, Kevin McHale and Robert Parrish.

Bobby Orr is one of the most famous names in hockey history — and one of the greatest athletes Boston has ever seen. The Bruins great was in the fourth year of his legendary career when he found himself on the sport’s biggest stage — the Stanley Cup Finals. The Bruins dominated the series with the St. Louis Blues, leading 3-0 when, 40 seconds into overtime in Game 4, Orr buried the game winner and flew through the air in what has become one of the most iconic photos in sports history. It was the fourth time the Bruins had claimed the cup.

The Ryder Cup has a knack for bringing out some of the year’s most exciting golf, thanks mostly to the team atmosphere and style of competition. In 1999, the United States team gave the golf world one of the most thrilling finishes and improbable comebacks in sports history. Heading into Sunday’s singles matches, U.S. captain Ben Crenshaw “had a good feeling” even through the Americans trailed 10-6. After winning the first six matches of the day, the U.S. had a chance to make history — which it did when Justin Leonard made his improbable putt on 18 to halve his match with Jose Maria Olazabal.

In the wake of the Sept. 11, 2001, terror attacks, the United States became more united than ever. Patriotism ran wild with American flags hanging proudly on every corner — which made the Patriots’ win in Super Bowl XXXVI in February 2002 that much more fitting. New England rode the shoulder of backup quarterback Tom Brady and the genius of Bill Belichick all the way to Louisiana and the first Super Bowl win in franchise history. Adam Vinatieri’s last-second field goal was the difference and the Patriots’ dynasty was officially born.

It was very difficult to think about sports in Boston and not think about the curse of the Bambino and the 86-year World Series winless drought — until 2004. That year, the Sox exorcised their demons by beating the Yankees in seven games in the ALCS, in a fashion that can only be described as epic. Following the four straight wins against the Yankees to win the pennant, the Sox met the St. Louis Cardinals with the chance to erase the curse. In four straight games, they did just that. For most in New England, the video below will never get old: