Former Caddie May Lose Scholarship For Running On Football Field 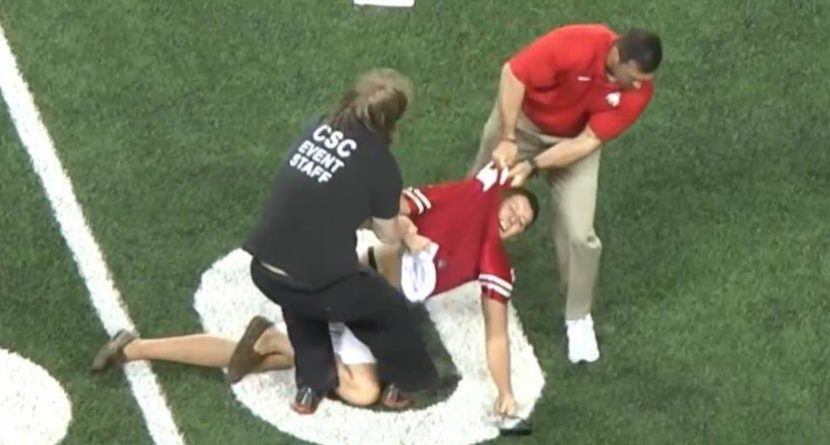 Anthony Wunder, a 21-year-old Ohio State student who ran onto the field Saturday during the Buckeyes’ game against Cincinnati and was subsequently body slammed by an OSU coach, may lose his scholarship for the regrettable act. Wunder is attending school on a full-ride from the Evans Scholars Foundation, which awards tuition and housing scholarships to golf caddies from modest means.

It was originally reported that Wunder already had his scholarship pulled, but the Western Golf Association, whose charitable mission is to fund the Evans Scholars Foundation, provided an update Wednesday evening. “We are disappointed in Mr. Wunder’s actions. He has been suspended from all Evans Scholars activities but remains on scholarship pending the outcome of our internal investigation of this incident.”

The tackle — which was made by former OSU and NFL linebacker and current assistant strength and conditioning coach Anthony Schlegel — may have been a tad too rough. The same could be said for Wunder’s punishment if he indeed loses his scholarship. Wunder, who is in his fourth year of a five-year engineering program, has already been asked to leave the Evans Scholars house near campus, according to the Columbus Dispatch.

Wunder is being charged with misdemeanor criminal trespassing, and his lawyer entered a not guilty plea in court on Tuesday. They could be looking at pressing charges against Schlegel, who had a talk with OSU head coach Urban Meyer after the body slam.

“I appreciated him protecting our players,” Meyer told reporters. “(But) I’d rather him not have a lawsuit if something bad would happen, you drill a guy like that.”

It is not clear if Wunder was injured from the tackle, but he spent the night in jail before his bail was posted on Sunday. His attorney said he won’t speak to the media until the court case is resolved.

The Evans Scholars Foundation is the sole beneficiary of proceeds from the BMW Championship, the third leg of the PGA Tour’s FedExCup playoffs.