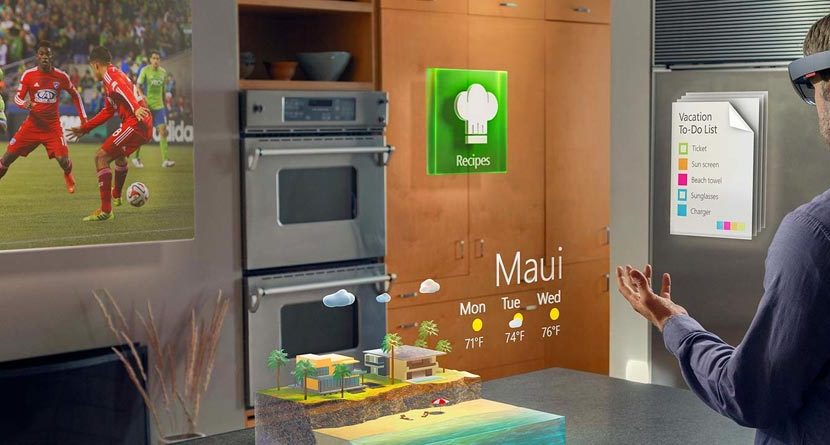 Microsoft dropped a bomb on the world of gizmos and gadgets when it announced its new hologram technology, the HoloLens. Right now, you’re probably thinking “pshh holograms … those aren’t real.”

That’s understandable, seeing as we’ve only seen that type of mind-blowing, unfathomable technology in movies. Well, not anymore.

Microsoft HoloLens is a headset that allows the user to see and interact with three-dimensional holograms in real life.

Imagine seeing the weather forecast hovering in midair and being able to interact with it by “touching” it with your hand. Or a hologram of your to-do list “hanging” on your refrigerator.

Heck, you can even play games like Minecraft in your living room … literally. And that’s just scratching the surface.

To truly understand this technology, watch the video below.

And we thought our iPads and iPhones were cool … not so much anymore. The HoloLens is said to be lightweight, comfortable, and is free of wires. Just put it on and experience a whole new world, all powered by Windows 10.

What Microsoft is showing the world is something that will change the way we live completely. We’ve never seen anything like it until now.

With HoloLens, we’ll be walking into our kitchens and doing this:

You get the gist.

Whether or not you’ll want to walk around in public with that headset on your face, I don’t know. But gallivanting around the house, blowing up virtual walls, and grabbing holograms sure does sound like fun.

In an age dominated by Apple products, Microsoft just took a leap of faith and stuck the landing. The HoloLens is a game (and life) changer.

Related Link: ‘Back To The Future’ Nike Air MAGs Releasing In 2015 With Power Laces