What To Watch This Weekend: Phoenix Super Bowl Pregame 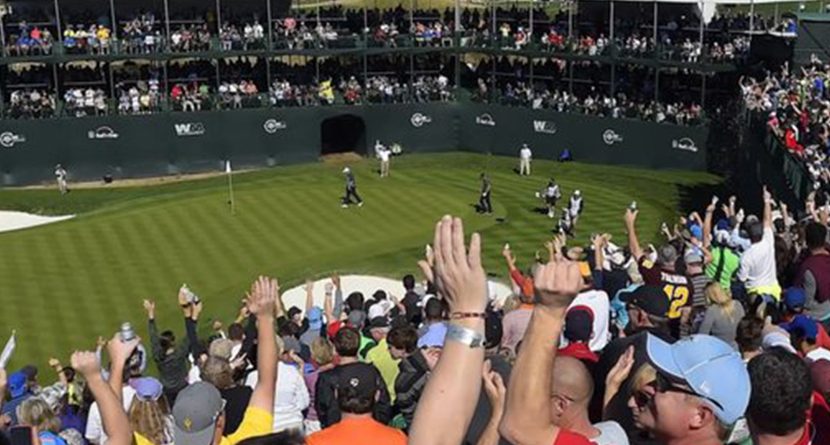 While most of the sporting world is training its eyes on Santa Clara for Super Bowl 50, golf’s version of a booze-soaked party is taking place in Scottsdale, Ariz. for the Waste Management Phoenix Open this weekend. Big names like Rickie Fowler, Bubba Watson, Phil Mickelson, Brandt Snedeker, Kevin Kisner and Brooks Koepka are in the Arizona desert, while Rory McIlroy, Henrik Stenson, Louis Oosthuizen are teeing it up in Dubai.

The Greatest Show On Grass will be the perfect Super Bowl appetizer this weekend. You get a pretty solid field competing in an atmosphere that can’t be duplicated in competitive golf. Although TPC Scottsdale can be a bit nondescript through the the first three-fourths of the course, 15-18 more than makes up for it.

The closest thing that the PGA Tour has to a football game will lead you into the big game. Make sure you get your Super Bowl party to tune in. No one needs six hours of talking heads muted in the background when there’s some truly fun golf on.

Coverage on Saturday will be from 1 p.m. to 3 p.m. on Golf Channel and continued on NBC from 3 p.m. to 6 p.m. Sunday’s coverage is the same, giving you plenty of time to catch the last half hour of pregame coverage, which if we’re being honest, is already more than you need.

The last leg of the Middle East Swing on the European Tour heads back to the scene of the worst commercial of all time, also known as Rory McIlroy’s second home. The world No. 2 has won in Dubai four times over the course of his career including bookend wins at the Omega Dubai Desert Classic and the DP World Tour Championship, Dubai to claim his — you guessed it — Race to Dubai title. McIlroy is six shots back heading into the weekend.

His last 9 opening rounds at #ODDC.

Also playing this week in Dubai is former SMU Mustang Bryson DeChambeau. He fired 2-under par 70 in his opening round and a 3-under 69 in the second round to be five strokes back. Stenson is at 7-under, Ernie Els is 9-under and they’re all chasing Rafa Cabrera-Bello, who sits on 10-under par.

Coverage this weekend, given the time difference, begins in the middle of the night. The third round will be on Golf Channel Saturday morning from 4 a.m. to 8 a.m. with the final round in the same time slot Sunday. A replay will air from 10 a.m. until noon.

Lydia Ko headlines the Coates Golf Championship presented by R+L Carriers this week in Ocala, Fla. Tournament coverage is scheduled to be televised on Golf Channel from 8 p.m. to 10 p.m. on Saturday and 3 p.m. to 5 p.m. on Sunday.