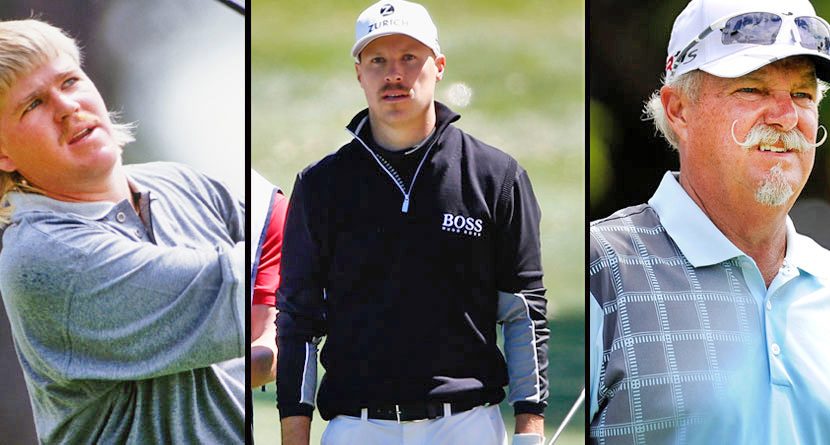 Few things, when properly executed, set a man apart for all the right reasons like a good mustache. A good one demands respect and signifies authority. It makes a man stand above his peers.

Conversely, if a mustache is forced or not done well, it can paint a man in the wrong light and encourage ridicule from peers and strangers alike.

The mustache rule — as we’ll call it — is never more true than during “Movember.” During the month of November, men across the country do their best to grow the ‘stache to support men’s health. In honor of Movember, we break down some of the best mustaches the game of golf has seen:

11. Corey Pavin: Pavin shies away from the ‘stache nowadays on the Champions Tour, but back in the day he was one of the more stylish guys out there, thanks in large part to his thick, black mustache. What competitor would want to go toe-to-toe with that? At the 1995 U.S. Open, the answer was no one.

10. Rickie Fowler: Rickie Fowler hasn’t rocked the mustache in quite some time but while it lasted, it was a thing of beauty. Despite being thin, it didn’t cross the line into creepy (see John Waters). If he did something with his hair, Fowler may have even had a bit of an Errol Flynn vibe to him.

9. John Daly: In the early 1990s, John Daly was the biggest thing in golf. His prodigious drives and Cinderella victory at the 1991 PGA Championship solidified his place in golf lore. Looking back, though, his most impressive feat might have been pulling off the blonde mustache. Not too many guys can do it, but Daly sure did. Between that, the mullet and his backswing, John Daly is the poster child for the saying, “Just because it works for him does not mean it’ll work for you.”

8. Craig Stadler: Perhaps no one in history has looked more like their nickname than Craig Stadler. “The Walrus,” as he’s affectionately known, looks just like the sea creature he’s named for and the reason might be his mustache. I’ve tried like hell to find a pic of him sans stache and it’s impossible. Like aliens, one may exist but I’ve never seen it.

7. Miguel Angel Jimenez: Why wouldn’t Miguel Angel Jimenez be on this list? If it’s cool, it’s probably been done by Jimenez. If he’s not winning golf tournaments, he’s working on cars, smoking cigars and/or indulging in red wine. Of course this guy sported a ‘stache back in the day. And of course it was epic. You have to admit, it’s tough to top the red mustache.

6. Ben Crane: Crane dipped his toe in the mustache pool for a bit this year, but has since shaved it off for some unknown reasons.  We’re not sure why he gave up that furry face beast, because while he was sporting it, he was dominating it. Crane’s ‘stache was to golfer mustaches what Mike Trout was to Major League Baseball — just coming in and demolishing people as a rookie. This thing was perfect, and we hope we haven’t seen the last of it.

5. Andres Gonzales: Andres Gonzales is back on the PGA Tour and there are plenty of people thrilled that he qualified again. His facial hair belongs on the highest level. Gonzales’ Fu Manchu is second to only one in the world of golf.

4. Padraig Harrington: Back9Network’s Padraig Harrington doesn’t rock it often, but when he does, his Fu Manchu is epic. There aren’t too many, golf world or otherwise, who look as bad ass as Harrington does with this mustache. Seriously, could you imagine if he were sporting this thing when he won his three majors in seven tries? I can tell you he probably would’ve won all seven of them. Just look at the intensity:

3. Gary McCord: Possessing perhaps the most famous whiskers in golf, Gary McCord is No. 3 on the list. In all honesty, the top six of this list are interchangeable. McCord could be No. 1 and no one would complain. He’s the godfather of golf mustaches and deserves to be recognized for it. Without McCord, you might not have any of the names on this list. The PGA Tour could be a stache-less world like it was in the days of Arnold Palmer… and who, besides Arnie, wants to see that?

2. Johnson Wagner: This may be considered an upset by many, but Johnson Wagner’s mustache is perfect. No one can touch it for a couple reasons. First of all, his name is Johnson Wagner. Johnson. Wagner. If anyone on the planet should be sporting an authoritative mustache it should be a guy named Johnson Wagner. In 2012, he showed up in Hawaii sporting the ‘stache and immediately drew comparisons to Magnum P.I. He also finished T-9 at the Hyundai, won the Sony Open and finished runner-up at the Humana in three consecutive weeks to start the year. Then he shaved and his play fell off. Behold the power of the ‘stache.

1. Mike “Fluff” Cowen: I’m sure I’ll take some heat for putting “Fluff” at the top of this list, but he deserves to be there. What do you think of when you think of mustaches, especially thick white ones? That’s right, knowledge; wisdom. As a caddie, it’s almost required that you possess both. Would Tiger Woods have won the 1997 Masters by as many shots as he did if it weren’t for the knowledge and wisdom pouring forth from Mike Cowen’s mustache? Doubtful.

Alright, I couldn’t in good faith put this on the list since it’s technically a character, but hey, anyone that can sport a stache that thick is a legend and deserves some recognition. I mean, that’s some rare air Dick Fowler finds himself in. We’re talking Mark Spitz territory here.

@DickFowlerPI still rock the khakis with a cuff and a crease! pic.twitter.com/PGChxp5Lez