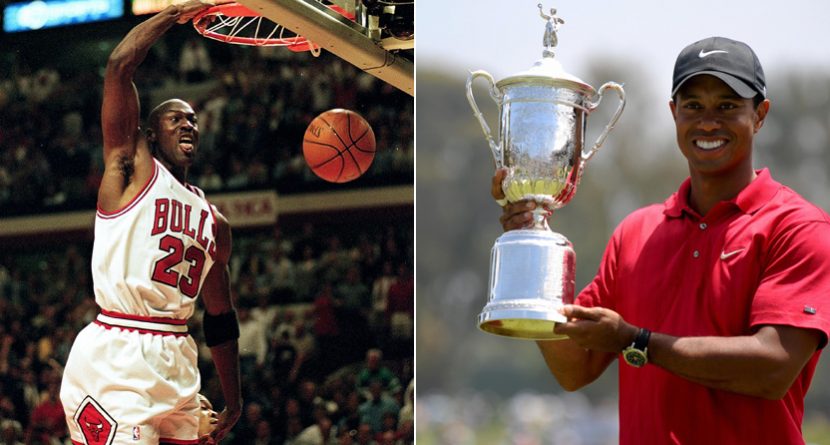 Happy Friday the 13th, everyone! That unluckiest of days for reasons that … no one really knows. Because it’s just a superstition.

However, it’s a superstition so widely accepted that a whole horror franchise was created around it: 12 scary movies, with songs, TV shows and novels that followed. And the number 13 is considered so luckless in some parts of the world that many large buildings conveniently leave out a 13th floor. Well, it’s technically there, but somehow the elevator jumps from 12 to 14.

So out at the BMW Championship today, expect some special attention paid to the lucky charms that golfers already carry around with them. In fact, you can bet on those trinkets getting extra love today in any sport; athletes are notorious for being superstitious.

Whether it’s baseball players hopping over the foul lines on a field or hockey players growing playoff beards, there are some long-standing traditions. Others are more personal and below are 11 of our favorites (we wanted to do more but we like odd numbers around here and 13, you know, is unlucky):

Graham DeLaet: The aforementioned playoff beards are popular in Canada because hockey is so popular in Canada. DaLaet is Canadian, so it’s no surprise he’s grown a thick beard for the FedExCup playoffs. It seems to be working. The 31-year-old tied for second at The Barclays, the first round of the playoffs, and he placed third at the Deutsche Bank Championship a week later, shooting up to fifth in the FedEx standings. Tiger Woods: The most well-known of golf superstitions is Tiger Woods wearing red on Sundays. It started because his mother believed red was a color of power, and it’s stuck because, well, he’s played so well on so many Sundays.

Ernie Els: The Big Easy believes a golf ball has only one birdie in it. So whenever he makes birdie, he ditches that ball. There have been a lot of lucky fans taking home golf balls over the years.

Michael Jordan: Remember how Jordan made it cool to wear long, baggy shorts, thankfully ushering out the “Too Much Thigh” era of the NBA? Well, he didn’t do it to make a fashion statement, but rather to help cover up his lucky North Carolina shorts, which he sported for every game until they, we assume, wore out.

Wade Boggs: You may have heard of the famous Red Sox third baseman being called the “Chicken Man.” You may not know why. Now you will: The Hall of Famer ate chicken before every single game of his 18-year career. But that wasn’t his only superstition: He also took batting practice and ran sprints at specified times before a game, and drew the word “chai” (which is Hebrew for “life”) in the batter’s box before an at-bat. Jason Giambi: Maybe the oddest – and therefore, greatest – athlete superstition was what Jason Giambi did to fight out of a hitting slump: He sported a golden thong. How he came up with that idea, we don’t want to know, but he claimed it worked. And teammates believed him, because some asked to borrow that shred of clothing to bust their slumps. Um, gross.

Sanya Richards-Ross: A four-time Olympic gold medalist and wife of New York Giants cornerback Aaron Ross, Sanya knows she’s fast. She was told so in the seventh grade, when her mother gave her a bullet necklace and said the was “faster than a speeding bullet.” Sanya lived out those words while wearing that necklace and is the reigning Olympic champion in the 400 meters.

Serena Williams: Many tennis players fall into a routine when serving, and Williams is no different. She bounces the ball five times prior to her first serve, and twice before a second. But her superstitions also include carrying her shower sandals to the court, tying her shoelaces in a certain manner, and wearing the same pair of socks throughout a tournament if she’s hot. Considering she’s won so many events, that’s a lot of smelly socks.

Les Miles: The ultra-successful football coach at Louisiana State knows his grass (the legal-in-all-states kind) because he eats some before every game. And yes, he can taste a difference. The grass at the ESPN campus in Bristol has nothing on Baton Rouge:

Noelle Pikus-Pace: Once hit by a runaway bobsled that derailed her Olympic dream, skeleton rider Noelle Pikus-Pace could have been forgiven for giving up the sport. Part of her motivation to continue pushing toward the 2010 Olympics, though, was her daughter. So Pikus-Pace kept a picture of Lacee in her helmet and a tracing of her little hands on her sled. The mother would kiss her hand and high-five her daughter’s before rocketing down the hill.