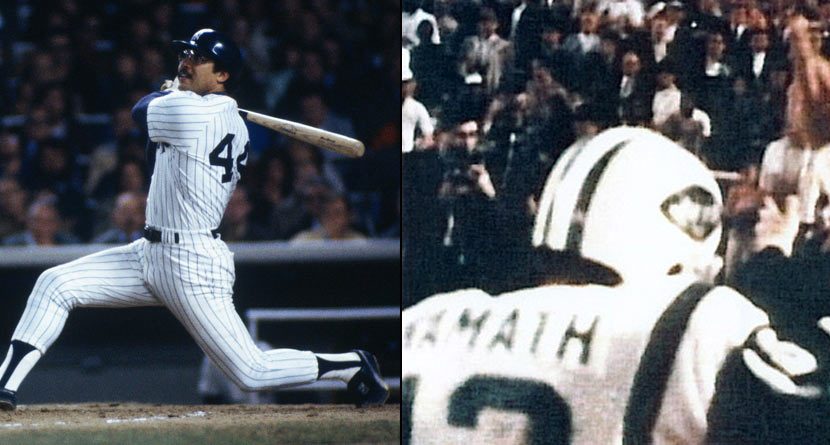 With the PGA Tour in Paramus, New Jersey, for The Barclays and the beginning of the FedExCup playoffs, it’s as good a time as any to take a look back at some of the most memorable sports moments the Big Apple has provided. You may not expect it, but with a sports history that includes names like DiMaggio, Ruth, Mays, Gretzky, Namath, Gifford, Ewing and more, there’s still plenty of room for golf on this list.

And we know — New Jersey and New York are different states. But Ridgewood Country Club is well within the New York metropolitan area, and it’s a mere 12 miles from the George Washington Bridge that connects the states. So there.

Winged Foot Golf Club in Mamaroneck, N.Y., has hosted its fair share of major championships but none were more memorable than the 2006 U.S. Open. On Sunday, Phil Mickelson seemed poised to win his first U.S. Open and the fourth major title of his career. Coming to 18, Mickelson needed par to win. Instead, he pulled driver, hit it way left — and the rest is history. After the round, Mickelson famously said, “I’m such an idiot.” Geoff Ogilvy held on to win his first and only major with a final score of 5-over-par.

On Dec. 30, 2007, the New England Patriots defeated the New York Giants at Giants Stadium, 38-35. They would go on to win two more games in the playoffs before meeting the Giants again in the Super Bowl. What happened on Feb. 3, 2008, was nothing short of miraculous. In the final minutes of the game with the Patriots leading by four, Giants quarterback Eli Manning completed a pass to David Tyree despite being under heavy pressure from the New England defense. The catch secured a first down and allowed Manning to complete the game-winning touchdown pass to Plaxico Burress with 35 seconds to go. It was the Giants’ first Super Bowl win since 1990 and the Patriots’ first and only loss of the year.

In 1994, the New York Rangers were the darlings of the sports world and the biggest thing to hit New York City since King Kong. Having been shut out in the championship department since the 1939-40 season, the Rangers found themselves on the brink of history in Game 7 of the 1994 Stanley Cup Finals. The Vancouver Canucks had won Games 5 and 6 and it looked like the Rangers might be foiled again, but Rangers stars Mark Messier and Mike Richter kept that from happening. The ensuing celebration was like nothing the city had seen before and ensured that Messier would be a made man in New York.

In 1977, Reggie Jackson was “the straw that stirs the drink” in the Bronx. “Mr. October,” as Jackson became affectionately known after the Yankees defeated the Dodgers in the ’77 World Series, put on an absolute clinic in the series-deciding Game 6. Jackson saw three pitches — and hit all three of them out of the park. The Yankees went on to win the game, 8-4, and clinch the Bombers’ first title since 1962. The following year, the two teams would meet again with the Yankees once again winning the series. It would be their last until 1996.

You want to talk great marathon games? The 2009 Big East Tournament men’s basketball quarterfinal matchup between powerhouse programs Syracuse and UConn might be the greatest of all time. It’s hard to beat a six-overtime thriller that holds the record for longest NCAA game played during the shot clock era. The game tipped off at 9:36 p.m. on Thursday, March 12, and ended three hours and 46 minutes later at 1:22 a.m. on Friday. In the end, Syracuse outlasted UConn, 127-117.

One of the most memorable moments in baseball history happened at the old Polo Grounds in New York. In 1951, before both teams moved to California, the New York Giants and Brooklyn Dodgers found themselves squaring off for the pennant. The Giants’ hopes looked bleak in the bottom of the ninth, trailing 4-1 entering the inning. But the Giants plated a run early, then put runners on second and third for Bobby Thompson. What happened next will be remembered forever as one of the most clutch performances in history with a call nearly as memorable and recognizable as the homer itself.

In 2002, the U.S. Open headed to arguably the most difficult municipal course in the country — Bethpage Black in Farmingdale, N.Y. As you might imagine, it proved to be quite the test for everyone — except for Tiger Woods. He was at the top of his game, came into the U.S. Open as the current Masters champion and had already collected seven major titles. Woods ended up finishing the week at 3-under, besting Phil Mickelson by three shots and the rest of the field by five.

After the devastating terrorist attacks of 9/11, the United States turned to sports to help heal. The New York Yankees took on the Arizona Diamondbacks in the World Series that year, and over the course of two nights, provided two of the most memorable wins in recent Series history. Yankee great Derek Jeter won Game 4 in the 10th inning after Tino Martinez tied the ballgame with a two-run homer in the bottom of the ninth. The very next night, third baseman Scott Brosius hit a two-run homer to tie the game in the ninth. Alfonso Soriano won the game in the 12th with an RBI single. Eventually, the Diamondbacks would prevail, but for two nights in the Bronx, the Yankees showed the world how strong and how close the city had become in the wake of tragedy.

In 1980, Jack Nicklaus captured the 17th major of his career at Oak Hill Country Club in Rochester, N.Y. It wasn’t just the penultimate major for the Golden Bear, it was also his fifth career win in the PGA Championship, tied with Walter Hagen for most all time. After not winning a major for two years, Nicklaus played incredible golf, winning by seven shots — a PGA Championship record at the time.

The 1969 Mets lost seven of their first 10 games and they very much looked like the losers that had never finished higher than ninth in the standings in the their history. Eventually, behind the strength of Ron Swoboda and the phenomenal pitching from the likes of Jerry Koosman, Tom Seaver and a young fireballer named Nolan Ryan, the Mets turned their season around and ended up winning 38 of their last 49 games to clinch the pennant. They faced the Baltimore Orioles in the World Series, winning the first title in team history, 4-1.

In perhaps the most “New York” moment on this list, Joe Namath took the attitude of the city and its team on his shoulders making good on his Super Bowl guarantee in Super Bowl III. Like the Mets in 1969, the Jets mostly played second-fiddle to the other New York team until 1969, when they beat the great Baltimore Colts, 16-7. The Colts were considered to be one of the greatest teams in history, coming into the game at 18-22-point favorites, but after the game the defining moment was Namath shaking his finger as a he ran into the tunnel and into the history books.