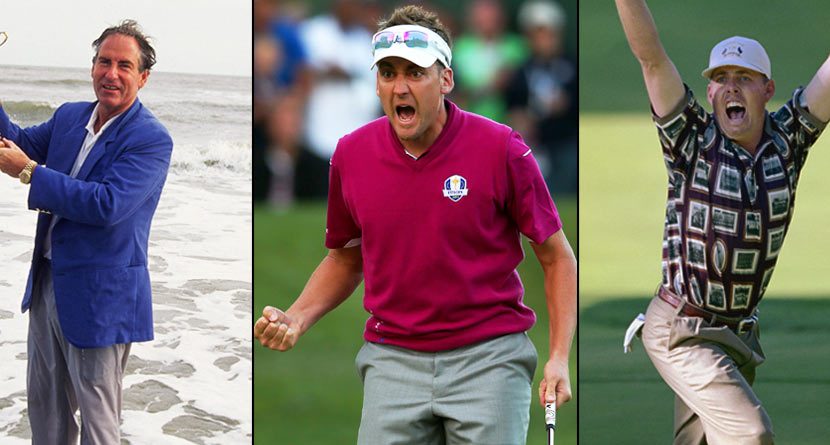 For the first 57 years of the Ryder Cup, the Americans dominated Great Britain and Ireland. Save for an infamous halve in 1969 and hiccups in 1929, 1933 and 1957, the Americans won them all. In 1979, the rest of Europe joined in and changed the event forever.

A tournament rooted in sportsmanship now stands for much more — bragging rights. With the best of the best from Europe and the U.S. squaring off in match-play and team competitions, the winners of the prized 19-inch Ryder Cup can brag for the next two years that they are the superior golfing entity. In the 17 matches held since 1979, the Americans have won just seven times to Europe’s 10.

As you might imagine, the type of pressure that can only come from playing for your country creates plenty of career-defining moments. Here are the 11 most memorable in Ryder Cup history:

In 1997, the Europeans were on home soil — and so was their captain — Seve Ballesteros. Looking to retain the cup, the Europeans played well early and jumped out to a commanding lead. On Sunday, however, the Americans stormed back with eight points in the singles matches. It wasn’t enough, though, as Bernhard Langer secured the emotional one point win for Europe and for Seve.

No player since Nick Faldo has struck fear in the hearts of the Americans like Ian Poulter. A match-play expert, Poulter boasts a 12-3-0 record in the Ryder Cup. His fiery personality and knack for making clutch putts has made him one of Europe’s all-time greats. The 2014 matches will mark his fifth consecutive appearance in the event and sixth overall.

In 2010, Graeme McDowell enjoyed a career year. At Pebble Beach in June, he won the U.S. Open and added two more wins on the European Tour that season. In September, his magical season continued during the Ryder Cup at Celtic Manor. The cup came down to McDowell and Hunter Mahan in the anchor match. McDowell was just too good, and when Mahan duffed his chip shot on 17, he sealed the Americans’ fate.

In the early 1990s, the Europeans boasted two of the best players the Ryder Cup has ever seen in Colin Montgomerie and Nick Faldo. In 1993 at The Belfry, the Europeans jumped out to a three-point lead following the Saturday morning foursomes. In the afternoon, European captain Bernhard Gallacher looked to put the pedal to the metal and sent Monty and Faldo out early against John Cook and Chip Beck. Unfortunately for the Europeans, Cook and Beck were up to the task. They won 2-up, and swung the momentum back to the Americans, who went on to retain the cup, 15-13.

At the 1969 Ryder Cup, Tony Jacklin and Jack Nicklaus squared off in the final match with the cup on the line. The Americans were looking to retain it while Great Britain & Ireland was looking for its first win since 1957. With emotions running high, both captains had to cool down their players early in the event. On the 18th hole, Jacklin had a putt to tie Nicklaus and forge a tie for the event. In one of the sports world’s most famous acts of sportsmanship, Nicklaus conceded Jacklin’s putt resulting in the first tie in Ryder Cup history.

By the time Payne Stewart and Colin Montgomerie came to the end of their 1999 singles match, the Americans had already clinched the Ryder Cup. Knowing this, Stewart conceded a long putt to Montgomerie, halving the match. It was the ultimate act of sportsmanship considering it came from the U.S. squad’s most passionate member. Monty had been tormented all week by rowdy American fans, but Stewart wouldn’t let him suffer the final insult of defeat. Less than a month later, Stewart perished in a tragic plane accident leaving his gesture as the final memory many have of him.

5) Darren Clarke Goes 3-0 After Passing of His Wife

In the summer of 2006, Darren Clarke was in the midst of one of the worst years of his career — and who could blame him? Clarke’s wife, Heather, was battling secondary breast cancer. He stopped playing following the Open Championship to be with her before she lost her battle that August. At the behest of his late wife, Clarke made himself available for the Ryder Cup. Knowing how much he loved the event, she didn’t want him to miss it. European captain Ian Woosnam took him with one of his captain’s picks and that’s where fate took over. After struggling during the year, Clarke was a machine at The Belfry, posting a 3-0 record for the Europeans, who went on to claim their third consecutive cup.

The Ryder Cup was designed by Samuel Ryder to be a competitive event that put sportsmanship on display. At Kiawah Island in 1991, however, it was gamesmanship that took center stage. With two of the most fiery teams ever assembled, agitation was high on both sides, leading to plenty of disagreements and a whole lot of drama. Ultimately, the Americans took the cup when Bernhard Langer missed a five-foot putt on the 18th hole of the 28th match. Had he made the putt, the Europeans would have retained the cup on the strength of a 14-14 tie.

In the history of golf there have been plenty of ultra-competitive players, but it’s possible that no one was more competitive than Seve Ballesteros. At the 1991 Ryder Cup, the feud between Seve and Paul Azinger came to a head. At the 1989 event, the bad blood began when Azinger refused to let Ballesteros take a scuffed ball out of play. In 1991, Ballesteros got under Azinger’s skin by coughing (later saying that everyone knew he had allergies) during the match and confronting him and playing partner Chip Beck about switching their golf balls during the match. Azinger called Ballesteros the “king of gamesmanship” and Ballesteros famously retorted, “the Americans have 11 nice guys … and Paul Azinger.”

In 2012, the Europeans found themselves in the exact same position the Americans did at The Country Club in 1999 entering Sunday singles matches. Trailing 10-6, the outlook was bleak and it appeared the Americans would bring the cup back to the United States for the second time in three events. Not so fast. The American team played well but were unable to keep up with the daggers being hurled by the likes of Justin Rose, Paul Lawrie, Ian Poulter and Martin Kaymer — who clinched the cup by halving his match with Steve Stricker at the 18th. The European victory became known as the “Miracle at Medinah.”

At The Country Club in Brookline, Mass. — the same place Francis Ouimet won the 1913 U.S. Open — American captain Ben Crenshaw had “a good feeling” and Justin Leonard became the unlikely hero. Trailing by four with seven holes left, Leonard pulled to within one of Jose Maria Olazabal. On the 17th green, Leonard buried one of the most memorable putts — not just in Ryder Cup history, but perhaps in all of golf history — to guarantee at least a halve with Olazabal. It was the final dagger and the exclamation point to the greatest comeback in Ryder Cup history. It was the first time any team had come back from four points down entering the Sunday singles matches to win.