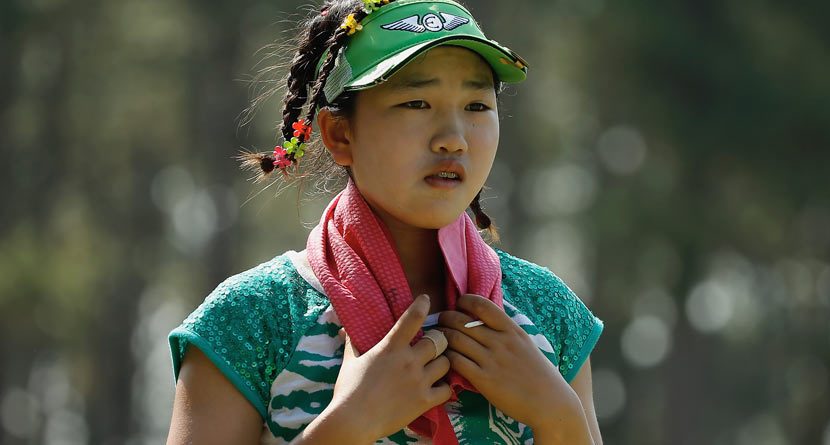 Fresh off her victory at Augusta National in April, 11-year-old Lucy Li is ready to tackle Pinehurst No. 2 and the U.S. Women’s Open. Also, you’ve just read the most bizarre-sounding sentence I’ve ever written.

Odd as it may be, every bit of it is 100 percent true. In case you didn’t hear, Lucy Li, the 11-year-old phenom became the youngest player ever to to qualify for the U.S. Women’s Open. In April, she won her division at the Drive, Chip & Putt Championships at Augusta National Golf Club. Just one look at her phenomenal swing, and you’ll understand why she’s here:

The women’s event immediately following the men’s Open on the same course is a first for everyone, especially those in the field for the 68th U.S. Women’s Open, but at just 11 years of age, Li will be experiencing a lot more firsts than your average player. Like most of the ladies, she has been hanging around Pinehurst for a couple days now, taking in the scenes and taking notes. But on Tuesday, Li gave her first big-time press conference and was quite poised for someone her age.

Odds are, Li won’t win the Open this year (a $10 bet for a Li win would bring in over $10,000) but you can’t take anything away from that swing and the talent that’s there. In couple of years, who knows how good she’ll be? She’s been nothing but impressive thus far and, obviously, this is just the beginning.

Other Hot Links
– Cheyenne Woods Is Pinehurst Bound
– Video: Lucy Li Was Better Than You When She Was 8
– Stanford Teammates Get New Sponsors, Make Pro Debut
– 5 Things You Need to Know: Travelers Championship
– Martin Kaymer Came Closer to Losing the Open Than You Think
– Martin Kaymer Goes Wire-To-Wire to Win 2014 U.S. Open