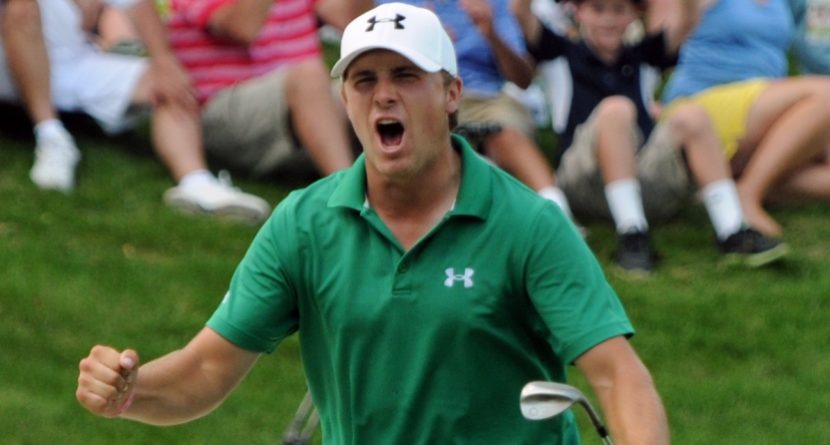 Golf shots come in all shapes and sizes. Three-hundred-yard drives count the same as 30-foot putts. Approach shots can mean as much as bunker shots. One stroke can win a championship, while another can win nothing but leave folks chatting about it the next day.

We saw all kinds of everything this year, but narrowed our list of best shots down to 13 in 2013. In reverse order, enjoy:

13) Sergio Garcia chips out from tree
In a bit of a predicament on the 10th hole of the final round at the Arnold Palmer Invitational, Sergio Garcia nimbly climbed a tree and put his ball back in the fairway. It didn’t help him win the tournament, as he actually withdrew later in the round, but how often do you see pros actually hit out of trees? Or any golfer for that matter?

12) Scott Brown bounces tee shot off bridge for tap-in eagle
Scott Brown tied for 62nd at The Barclays, but he turned in the shot of the tournament when he attempted to drive the green on the 325-yard, par-4 16th hole during the first round. His tee shot sliced toward a pond, but bounced right off a bridge, onto the fairway, and rolled to within four feet of the cup.

11) Keegan Bradley eagles, goes Dufnering
Keegan Bradley, who earlier in the year helped his good buddy Jason Dufner to internet fame by spreading the Dufnering meme, got paired with his pal for the final round of the final event of the ’13 season, the Tour Championship. With Dufner watching, Bradley holed out from 170 yards for eagle at No. 7, then sat down in the fairway and slouched over, acting out Dufner’s famous pose.

10) Patrick Reed sticks approach from pine needles, wins first event
Battling 20-year-old wunderkind Jordan Spieth at the Wyndham Championship, Patrick Reed appeared to give up the title when he sent his drive into the trees on the second playoff hole. But his approach shot from there stopped seven feet from the hole and his subsequent birdie putt gave him his first PGA Tour victory. “It was the best shot of my life, that’s for sure,” Reed said. “One of the best shots I’ve ever witnessed,” Spieth said. [2:10 mark]

9) Anna Nordqvist makes Solheim Cup history
The Solheim Cup (U.S. women vs. European women) first teed off in 1990, but it wasn’t until this August that a player sank her tee shot. Sweden’s Anna Nordqvist did the deed at No. 17 during Saturday’s foursome matches, and her hole-in-one helped Europe cruise to victory over the Americans.

8) Henrik Stenson seals Deutsche Bank with bunker hole-out
Henrik Stenson held a two-stroke lead as he sent his approach shot at No. 17 into sand, the first bunker he found himself in all tournament. Chomping at his heels was Steve Stricker, who was about to putt for eagle and a share of the lead. Yet, even if Stricker sank it (he didn’t) it wouldn’t have mattered because Stenson holed out for birdie. The victory gave him the lead for the FedExCup, which he’d secure two events later by winning the Tour Championship.

7) Shawn Stefani sinks incredible ace at U.S. Open
In terms of luck, this is the shot of the year. At the 229-yard, par-3 17th, Shawn Stefani’s tee shot hit off a hill and rolled ever so slowly right into the cup. If the cup was a magnet and the ball were metal, this is exactly what that would have looked like.

6) Stacy Lewis inches closer to British Open title
No women’s major received more attention than the Women’s British Open, as Inbee Park attempted to win a fourth straight major. American Stacy Lewis, however, stole the show and the title, helped immensely by her approach shot on the 71st hole. She called it the “perfect golf shot.”

5) Zach Johnson stuns Tiger Woods in his own event
Tied with Tiger Woods on the final hole, Zach Johnson watched Woods hit his approach into a greenside bunker, leaving the door open for Johnson to make his move. Instead, he dumped his approach into the lake. But after taking a drop in the designated area about 100 yards away, Johnson stepped up and holed out from 58 yards, then won the tournament on the first playoff hole.

4) Phil Mickelson runs it onto green to continue birdie run
Phil Mickelson never considered himself a great player on links-style courses, where punch-and-run shots can be more effective than Mickelson’s patented flop shots. But he morphed himself into a fantastic links player on Sunday at the Open Championship, as evidenced by his second shot at the 575-yard, par-5 17th. He’d birdie the final two holes en route to a three-stroke victory and his first Claret Jug. [4:10 mark]

3) Jim Furyk sticks approach on 18 to card a 59
After Jim Furyk opened the BMW Championship with a 1-over-par 72, no one could have guessed he’d turn in the best round of the season the next day. But the 43-year-old was feeling it early and often in the second round, which he opened with three straight birdies and finished 12 under par. He needed to stick his 103-yard approach shot close to the final hole to have a chance at 59 – three feet, three inches from the cup was good enough.

2) Adam Scott sinks 20-footer to get into Masters playoff
No Australian had ever won the Masters, and Adam Scott was well aware of that as he stood over a 20-foot putt on the final hole that would force a playoff with Angel Cabrera. Scott spun it around the edge and in, shouted “Come on Aussies!” and then dropped a 15-footer on the second playoff hole to secure a green jacket and his first major.