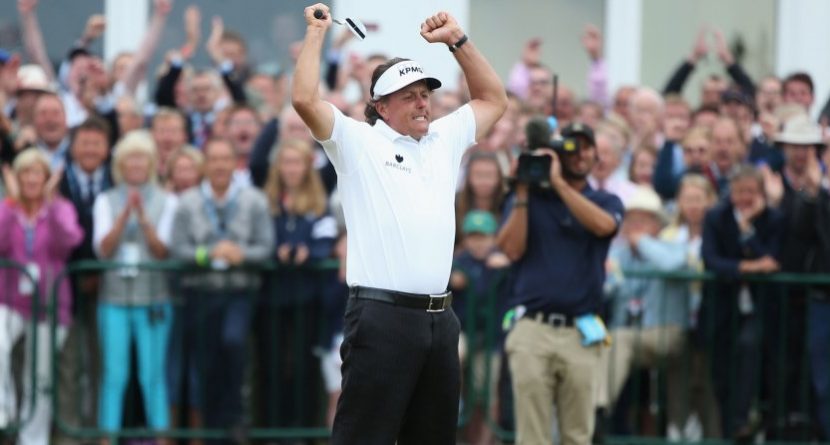 13) 14-year-old makes cut at Masters
By winning the Asia-Pacific Amateur Championship last November, China’s 14-year-old Tianlang Guan booked a spot at the 2013 Masters, where he became the youngest player to ever compete in the famed tournament. Then he shot a 1-over-par 73 on Thursday and a 75 on Friday (despite taking a penalty stroke for slow play) to make more history as the youngest player ever to make the cut at a major championship.

That same tournament and hole also featured this classic birdie dance. We can only hope the PGA Tour doesn’t ban dancing too:

11) Spieth takes John Deere Classic
After playing much of the season primarily on sponsor exemptions, 19-year-old Jordan Spieth booked his PGA Tour card by winning the John Deere Classic in July, making him the youngest victor on the PGA Tour since 1931. And he won via a playoff, which he wouldn’t have even been a part of had he not chipped in on the 72nd hole.

10) Tiger’s tough break at Masters
At the par-5 15th hole during the Masters’ second round, Tiger Woods’ third shot struck the flagstick and rolled off the green into some water. Tied for the lead at the time, Woods took a drop and eventually bogeyed the hole. Or so he thought. A TV viewer called in to tournament officials that evening and said the drop was illegal, and they later determined it was, thus adding two strokes to Woods’ score. He finished the tournament 5-under in a tie for fourth, two shots out of third.

9) Singh and the deer antler spray
Vijay Singh admitted in January to using deer antler spray, not knowing at the time that it contained a banned substance (IGF-1). Because he confessed, Singh was miffed when the PGA Tour provisionally sanctioned him. He appealed and in April was cleared of any wrongdoing. Singh still sued anyway. The Tour asked a court for the case to be thrown out in June.

8) Rose relieved of major pressure
Upon arriving at Merion Golf Club for the U.S. Open, England’s Justin Rose was among the favorites in the Best Player Without A Major debate. But he happily jumped off that list with a steady four-day performance to become the first Englishman to win the U.S. Open since Tony Jacklin in 1970, and the first English major champion since Nick Faldo won the 1996 Masters.

7) Golf Boys release a new music video
The first Golf Boys video, released in June 2011, was fantastic. We didn’t think they could top themselves, but sure enough, Ben Crane, Bubba Watson, Rickie Fowler and Hunter Mahan did. “2.Oh” was so much better.

6) Tiger/Sergio feud
Tiger Woods and Sergio Garcia have a long history together, but it took an interesting turn when Garcia got upset as the two played together at The Players Championship. He claimed Woods caused a distraction during the third round on the second hole that forced him to slice a shot into the woods. The two exchanged some words in the media, but it all came to a not-so-funny end when Garcia joked that he would serve Woods “fried chicken” if they met for dinner.

5) Scott secures green jacket
The first man this year to remove himself from the Best Player Without A Major list was Adam Scott, who took out Angel Cabrera on the second playoff hole of the Masters. The win marked the first time an Australian won the tournament, moved Scott up from No. 7 to No. 3 in the world rankings, and might have made him the most eligible bachelor in the world.

4) Mickelson shoots 67 after red-eye, still loses U.S. Open
The U.S. Open had always vexed Phil Mickelson, so when he chose to attend his daughter’s eighth-grade graduation on the west coast the night before teeing off at 7:11 a.m. on the east coast, few gave him a chance of winning. So he promptly went out and shot a 3-under 67 to take the 18-hole lead. He kept a share of the lead for much of the rest of the weekend, but found a way to lose the U.S. Open yet again, taking runner-up for a record sixth time.

3) Woods announces relationship with Vonn, reclaims No. 1
Tiger Woods’ season got off to a great start with a victory in his first appearance, and he followed it up with another win three starts later. He was playing well and seemed happy with life. Then he confirmed the rumors that he was dating Olympic skier Lindsey Vonn. Later that week, he went out and collected his third title of the young season, and returned to No. 1 in the world for the first time since October 2010.

2) Dufner delivers at PGA Championship
“Dufnering” became an internet sensation in April when a photo of the slouched and thoroughly unimpressed Jason Dufner caught fire. That was what he was most famous for until he put on a shot-making clinic at Oak Hill to win the PGA Championship, his first major. The victory revved up the #Dufnering craze again, brought some fame to his gorgeous wife, and got him a spot on the Howard Stern Show.

1) Mickelson rebounds to win British Open
Phil Mickelson said his 2013 U.S. Open setback was the most “heartbreaking” of them all. His wife, Amy, said he sulked for days. Few expected him to contend at the next major, the Open Championship, which he had never won. It remained that way through the third round of that tournament, as Mickelson sat five shots back of the lead. But he caught fire on Muirfield’s back nine on Sunday, birdieing four of the last six holes to finish 3-under overall. He was the only golfer to go under par at the Open, and that gave Mickelson his first Claret Jug and fifth career major title.