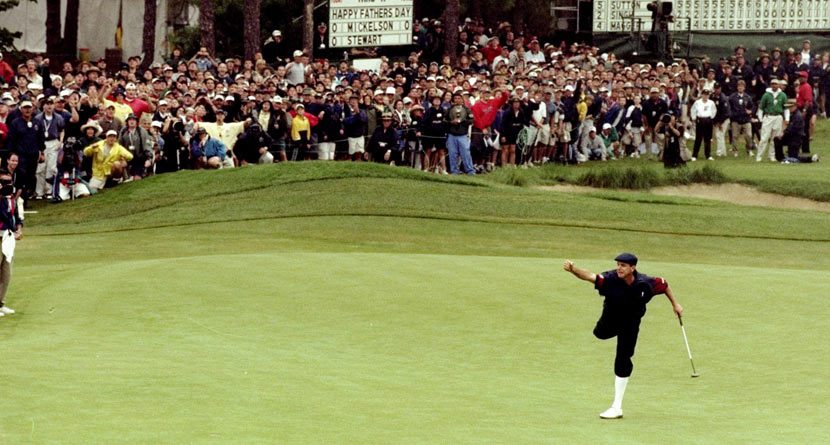 It’s been 15 years since Payne Stewart topped Phil Mickelson by a stroke to claim his second U.S. Open title. Fifteen years since the finish at Pinehurst went down as one of the most memorable finishes in major championship history. And 15 years since one of the game’s greatest champions tragically passed away in a plane crash. The man on Stewart’s bag in 1999 was Mike Hicks. Since then, Hicks has caddied for a number of tour pros, most notably two-time U.S. Open champ Lee Janzen, and most recently Spencer Levin at this year’s Crowne Plaza Invitational. In all that time, Hicks had never seen footage of Stewart and his incredible final-round run to U.S. Open glory.

“I’ve got the tape, but I had just never sat down and watched it,” Hicks said in an interview with Golf Channel’s Jason Sobel. “If Payne hadn’t passed away in October, at some point that winter I would have watched the tape. But I don’t know – it’s just been strange for me.”

Hicks’ coming to watch the footage happened by accident while his friend was flipping between NBA and NHL playoff games recently. He called Hicks into the room where, for the first time since he lived it, he watched the legendary final round.

“There was no small talk between Payne and I. He didn’t say five words to me that day, other than, ‘What do we got? What’s it playing? How’s the wind?” Hicks remembered, adding, “What really astounded me was the focus that he had, the look of determination on his face. When you’re in the heat of the moment, you don’t really notice that stuff.” Hicks, who has since retired from caddying due to injuries accrued over a lifetime of looping on tour, acknowledges, “It really feels like yesterday that I was caddying for Payne. It’s all gone by so fast.”

Of his numerous other bosses, Hicks said, “I got along with all of them, but it just wasn’t the same. Never will be the same; never going to find another job like I had.”

This year, the U.S. Open returns to Pinehurst No. 2 for the first time since 2005, and for the second time since Stewart and Hicks stood alone atop the golfing world.