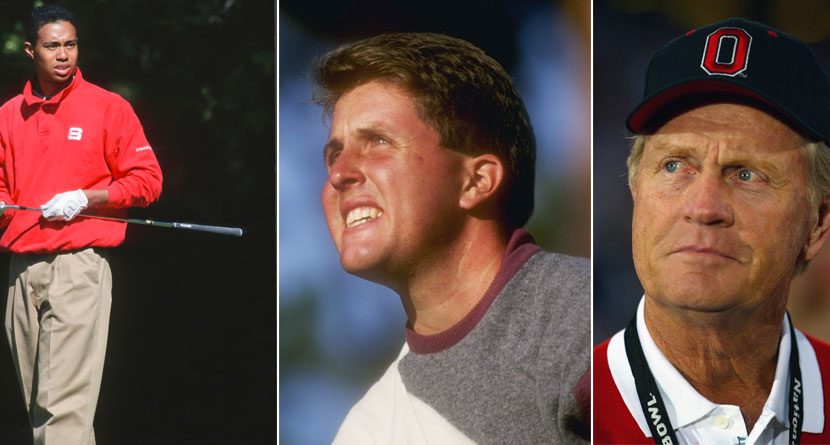 With the NCAA Men’s Basketball Tournament finally upon us, we decided to take a look at the schools in the “Big Dance” and their best golf representation. Sure, some of these schools would last longer on the golf course than they will in the NCAA Tournament, but that doesn’t mean they’re not worth looking at.

Florida (1) – While there are a few top players who hail from the University of Florida, perhaps its greatest alum to date is two-time U.S. Open champ Andy North. In college, North was a star, being selected three times as an All-American and all-SEC player. He finished his career with just three PGA Tour wins, but gets the edge in this contest over fellow Gators like Billy Horschel and Chris DiMarco because of his major triumphs.

Kansas (2) – The best golfer to come from basketball powerhouse Kansas is Gary Woodland. He actually transferred to Kansas to play golf on scholarship after beginning his studies at Washburn University on scholarship for basketball. With four wins as a pro, two of those on the PGA Tour, it’s safe to say Woodland made the right decision in transferring. Ohio State (6) – The best golfer from Ohio State University is Tom Weiskopf… just kidding! No offense to Weiskopf, as he would be the greatest alum if it weren’t for a fellow named Jack Nicklaus. The Golden Bear is considered the greatest golfer of all time. His 18 major victories are still a record and his 73 wins on the PGA Tour are good for third all time. As great as Weiskopf was, it’s impossible to argue against Nicklaus in any “greatest ever” discussion. New Mexico (7) – Tim Herron is a four-time winner on the PGA Tour and the best golfer to come out of the University of New Mexico. “Lumpy,” as he is often referred to, played on the 1993 Walker Cup team and finished sixth in the 1999 U.S. Open at Pinehurst, along with collecting four wins on the PGA Tour.

Colorado (8) – Hale Irwin won three U.S. Opens and collected 20 wins on the PGA Tour over the course of his career, making him the best golfer to come out of the University of Colorado. While the Missouri native put up solid numbers on the PGA Tour, they’re nothing compared to his Senior Tour results. Irwin won 45 times, including seven times in major championships, during the single most successful Senior Tour career in history. Along with his individual NCAA national championship in golf, Irwin was also a two-time All-Big Eight defensive back in football for CU.

Related Link: By the Numbers: Tiger Woods vs. Jack Nicklaus

Stanford (10) – This is a no-brainer, isn’t it? The greatest golfer from Stanford University is Tiger Woods. Despite only attending for two years, it was long enough for Woods to win an individual NCAA championship and to reel off three U.S. Amateur championships before going on to arguably the greatest professional career in history. The second best from Stanford, you ask? That’d be eight-time major champion Tom Watson. Coastal Carolina (16) – While the university probably won’t be around in the NCAA Tournament for too long, it’s safe to say its golf representation will be winning on tour for years to come. Dustin Johnson is only 29 and has already picked up eight wins on tour. He’s also the only player not named Tiger Woods to have won at least once in each of his first seven years on tour. Arizona (1) – Jim Furyk has taken a crazy-looking swing and turned it into one of the most solid PGA Tour careers in recent memory. While he often flies under the radar, Furyk has won 16 times on the PGA Tour, including the 2003 U.S. Open. In 2013, he became the sixth player to shoot a 59 during a tour event. In college at the University of Arizona, Furyk was an all-American and led the Wildcats to their first and only NCAA title.

Oklahoma (5) – Surprisingly, there weren’t too many golf stand-outs to choose from at the University of Oklahoma. It came down to three-time PGA Tour winner Anthony Kim or two-time winner and 2004 Open Champion Todd Hamilton. This one is up for debate. You can say it’s Hamilton due to his major victory, or you can take Kim, since he was so highly touted and saw success early in his career. Either way, I don’t think you’d be wrong in saying one or the other is the best player to come out of Oklahoma.

Baylor (6) – Jimmy Walker wasn’t a household name until this year, but now, it’s hard to argue with his success and his selection as the best player to come out of Baylor’s golf program. After being shut out of the winner’s circle in his first 178 starts on the PGA Tour, Walker went on a roll, winning three of his first eight events in 2013-14. The Oklahoma native will make his first start in the Masters this year. Oregon (7) – Despite never winning a major, Peter Jacobsen is the greatest golfer to come out of the University of Oregon. Over the course of his PGA Tour career, Jacobsen won seven times. He won two majors on the Champions Tour after turning 50 and was the winner of the fictional U.S. Open in the movie “Tin Cup” in 1996.

Oklahoma State (9) – I know everyone wants to see Rickie Fowler here as the best golfer to come out of Oklahoma State University, but he just hasn’t earned it yet. Right now, that distinction belongs to Bob Tway, who won eight times on the PGA Tour, including the 1986 PGA Championship.

BYU (10) – One of the most famous names in all of golf, Johnny Miller, started his career off at Brigham Young University. Miller is known mostly for his work in the broadcast booth, but during the 1970s, the California kid served as a foil to many of the game’s greats, including Jack Nicklaus and Lee Trevino. In that time, Miller won two majors and 25 PGA Tour events. Duke (3) – Arguably the school with the greatest basketball pedigree besides UCLA or Kansas on this list, Duke’s golf alumni is also pretty stout. The best player from the Blue Devils program was 1959 Masters champion Art Wall Jr. Wall collected 13 more PGA Tour wins over the course of his career and was also the PGA Tour Player of the Year in 1959.

Texas (7) – Few people have ever enjoyed the success in college golf that Texas alum Ben Crenshaw did. Crenshaw won three straight NCAA individual championships from 1971-73 and continued his winning ways all the way through his pro career. Crenshaw won 19 times on tour, including the Masters in 1984 and 1995. Kentucky (8) – Kentucky is another basketball powerhouse that can also boast a Masters champion. Gay Brewer, who claimed the green jacket in 1967, attended the school for two years on a football scholarship and played under the then soon-to-be-legendary coach Bear Bryant. Brewer collected nine more PGA Tour wins to go along with his Masters triumph.

Kansas State (9) – Kansas State has long been known for its basketball program, but it has also produced some pretty solid PGA Tour players, the most successful of which is Jim Colbert. A major champion on the Senior Tour, Colbert also won 34 times as a professional and eight times on the PGA Tour. Since retiring, Colbert has worked as a TV analyst and has started his own course management company.

Arizona State (10) – The Arizona State Sun Devils have always been better at golf than they have been at basketball, but that certainly isn’t a knock on their basketball program. It’s just that when you have guys like Phil Mickelson, your golf program tends to be pretty darn good. Mickelson won three NCAA individual titles in 1989, 1990 and 1992 while at ASU. After that, all he did was win more than 50 times worldwide and claim three Masters, an Open Championship and a PGA Championship in his Hall of Fame career. Wofford (16) – Wofford has been a contender lately, making it to the NCAA Tournament three times in the last five years. Fittingly, its best golf product, Back9Network’s William McGirt, has followed a comparable story arch. McGirt is still searching for his first career win on tour, but as of late, his name has been on the front page of the leaderboard more and more often. He is poised to break through soon — just like the Wofford Terriers basketball team… except, probably not this year since they play Michigan right off the bat.