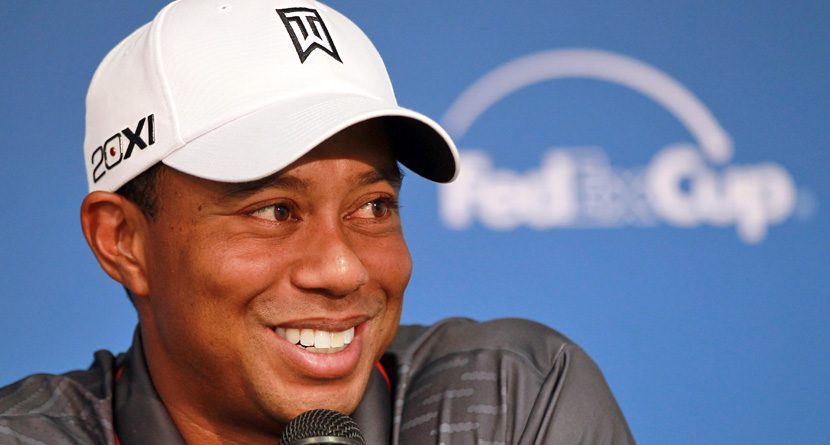 Tiger Woods, barring a flare-up of his sore elbow, crabby knee, aching Achilles tendon, or his most recent injury — a bad back that brought him to all fours Sunday at The Barclays — is scheduled to be the top guy teeing it up this week at Boston’s annual Labor Day PGA Tour party, the Deutsche Bank Championship. This year, however, should the world No. 1 return to TPC Boston as a competitor, it will be as head cheese not only of those vying for a W in the second of four FedEx Cup playoff events but of the tournament itself.

“My foundation is running the Deutsche Bank Championship in August at the TPC Boston, and we’re looking forward to the new experience,” Woods, who maintained his lead in FedEx Cup points after battling to a share of second place in Sunday’s finale, said on his website prior to July’s British Open. “The tournament has been fantastic through the years and has been a key contributor to the growth of our education programs. It’s been great to work with Seth Waugh [former chief executive officer, Deutsche Bank Americas Finance/current chair, Deutsche Bank Americas Foundation] and his staff, and we’re excited to run the event.” Deutsche Bank has been the tourney’s title sponsor since its inception in 2003, with Woods’ foundation and local New England charities the recipients of more than $24 million in charitable donations in that time.

“The Deutsche Bank Championship has seen tremendous success thanks to the Boston community, the incredible fans and dedicated sponsors, and we are excited to play a bigger role in its management moving forward,” Greg McLaughlin, president and CEO of the Tiger Woods Foundation, said in a statement back in April, when TWF officially announced the new arrangement.

That won’t change under new management, and neither will Woods’ presence.

“Tiger has always played a role in the even with the Tiger Woods Foundation,” tourney director Eric Baldwin told NEGM by phone recently.

While New England golf fans are unlikely to notice any alterations to their enjoyment of watching the world’s best compete for an $8 million purse, some Boston public school kids will realize the largesse of Tiger’s charity through the foundation’s Earl Woods Scholarship program. In partnership with the Red Sox Foundation, five local students who have demonstrated high academic abilities, financial need, and participated in community services will receive individual mentors and grants of up to $20,000 each to help defray costs of four-year university experiences.

The scholarship, named for Tiger’s late father, began in 2006 and has helped 100 students nationwide matriculate.

“The program is not new but it’s a first for this year that we’ve selected five local students so we’re excited about that,” Baldwin said.

The top 125 points leaders qualified to start the FedEx Cup series last week. Winnowed down to the best 100 for this week’s tilt, a healthy Woods — No. 1 in the world as well in the FEC standings despite finishing in a share of second to Adam Scott at The Barclays last week — would lead the way at the popular Norton, Mass., tourney come August 30. The top 70 advance to the BMW Championship in two weeks, with the field narrowing down to an eventual top 30 who will compete in the Tour Championship at East Lake Golf Club in Atlanta.

The last man standing hits the jackpot, pocketing a tidy $10 million for his efforts.

With a Friday start to the contest that ends on Labor Day Monday, Woods has an extra day to rest his stiff back, which he said kicked up after sleeping on a soft hotel mattress prior to last week’s tourney at Liberty National Golf Course. It’s unclear if it’s the same injury Woods incurred on a similarly saggy bed a year ago in New Jersey.

“That’s all hypothetical right now,” Woods, who, with three others, finished a shot off the winning pace set by reigning Masters champ Scott and winced and grimaced with back pain all week, told reporters about his availability for Boston. “I’m not feeling my best right now.”

Should he be able to tee it up, Woods will play the first two rounds with Scott and Phil Mickelson, Nos. 2 and 3 in the official world golf rankings and FedEx Cup standings, respectively.

The Deutsche Bank Championship is slated to run from August 30-September 2 at the 7,214-yard, par-71 TPC Boston.

Emily Kay is a regular contributor to New England Golf Monthly. You may follow Kay on Twitter @golfexaminer
New England Golf Monthly is the #1 read golf publication in the New England region serving the interest of the Rhode Island, Massachusetts, Connecticut, New Hampshire, Vermont and Maine golf communities as well as the organizations in support of the game such as the New England PGA. Their mission is to supply readers, associations and advertisers with multiple forums to share information and grow the game of golf.