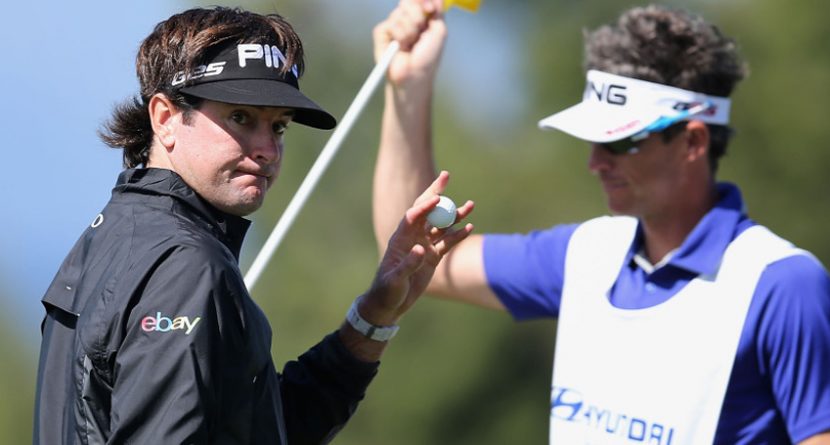 As the Tour remains in SoCal for the Farmers Insurance Open in San Diego, our attention turns to a players only meeting in the Torrey Pines clubhouse and millionaire golfers looking to stay one step ahead of the IRS.

Group Most Likely In Need Of A Golden Parachute: Phil Mickelson, Brandt Snedeker, and Bubba Watson

Phil Mickelson continues to catch crap for comments he made after the Humana Challenge about how the changing California tax codes may force his family to relocate. Give the guy credit for being honest, his opinion is after all shared by the majority of professional golfers who have already uprooted their families to the   friendly shelters of Texas and Florida. Tiger Woods agrees, he moved out of California in 1996 before he even started cashing multi million dollar checks. Proposition 30, a tax increase for California residents earning more than $250 K is meant to generate revenue to lower the crippling financial burden facing the bankrupt public school system. The ballot initiative passed with ease in November but has forced members of the upper crust to consider locking up the vaults and search for an offshore savings account in the Caymans. What makes Mickelson’s comments all the more confusing is that financing education and academic scholarship has been a central part of his philanthropic portfolio for years.

Brandt Snedeker, who is playing alongside Lefty in San Diego had some choice words for the golfer saying:

I’ll put it this way, I think we’re all very fortunate to pay taxes in this great country. Anybody’s personal tax problems are their personal tax problems. I don’t think it’s our place in any way, shape or form to try to influence policy or anything like that. I feel for Phil if he feels that way, but that’s his problem. He can figure out a way to deal with it. Everybody in America has the same problems just about. It might be on a different level, but everybody deals with the same things.

Very interesting coming from a guy from Tennessee where there is no personal income tax. Maybe Phil should move to Nashville. I hear the Grand Old Opry is wonderful this time of year. Apparently this anchored putting controversy has yet to be fully resolved as the PGA Tour must now decide its timetable for either accepting or augmenting the USGA’s new rule. Players at the Farmers Insurance Open had a chance to pepper USGA chair Mike Davis with questions Tuesday night and tempers were sure to flair as the anchored putter debate continues to rage through clubhouses across the country.

Tiger Woods continues to support the decision saying the USGA “believes every club should actually swing, and I agree with that”. Brendan Steele went as far as to proclaim that things could get quite heated between the two camps because, “guys with belly putters are kind of taking names of the guys that are kind of having a celebration that use short putters. There’s going to be some words”. But then you have golfers like Tim Clark, who have relied on a belly putter for years, refusing to comment publicly on the issue perhaps out of frustration or maybe because he’s been told by the anchored putter lobby to pursue a much more calculated, clandestine strategy that attempts to subtly sway the public sentiment in their favor. Either way, just because rule 14-1b is set to take affect in 2016 does not mean we won’t be talking about this particular issue for the foreseeable future. Do you realize Tiger Woods has already won this event six times? That doesn’t even count his heroic conquest over Rocco Mediate during the 2008 U.S. Open when it turns out Woods was so physically handicapped by a torn ACL and broken leg that he grew weary of warming up in front of his competitors and the television cameras because he didn’t want people perceiving any kind of advantage over the hobbled superstar. Now he returns to Torrey, the site of his last major championship, and while the leg has healed the game remains a “process”. Ultimately nobody should be surprised if Tiger walks away with another trophy Sunday. It’s amazing that Jeff Overton has never won on tour before. His star was on the rise in 2010 after an inspiring performance at the Ryder Cup but he has since fallen on much harder times thanks in part to a bum shoulder and shaky statistics that caused him to miss 3 of 4 majors in 2012. But the Indiana native got engaged this winter and with two top 30 finishes over his first two tournaments in 2013 things are looking up. Credit also to his playing partner Driscoll who after hitting a first round ace at the Humana Challenge offered to pick up the tab at the 19th hole. It’s this type of generosity that almost makes most folks forget all about golfers complaining about tax rates. Almost.