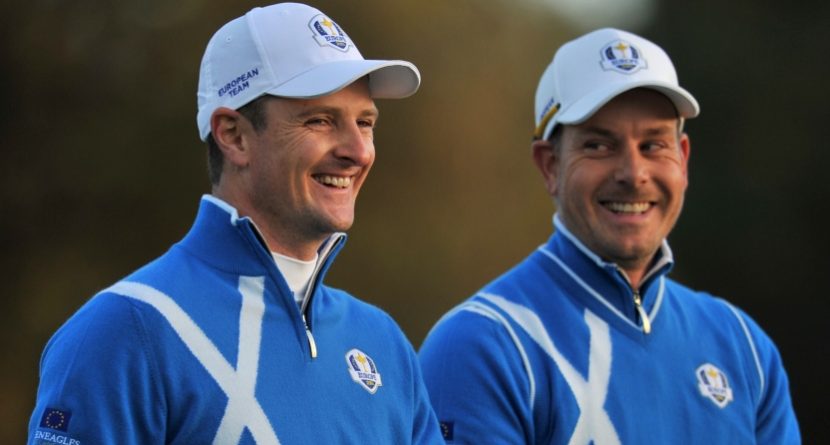 Day one is in the books at the Ryder Cup and the U.S. is in a familiar position: behind. After taking the morning four-ball session, 2.5-1.5, the Americans dropped the afternoon foursomes session, 3.5-0.5, leaving them trailing 5-3 overall going into Saturday.

As with any team, some players fared better than their brethren. Here is a look at the studs and duds from Friday at Gleneagles:

Justin Rose and Henrik Stenson
Coming into the day, Stenson was the only European with an all-time losing record in the Ryder Cup (2-3-2). No more. The Swede teamed with Rose in the first match of the day, didn’t lose a single hole against Bubba Watson and Webb Simpson, and cruised to a 5 and 4 victory. That same Euro pair went out again in the afternoon and took care of Hunter Mahan and Zach Johnson, 2 and 1. Of the four pairs that played both sessions, Rose and Stenson were the only ones to go 2-0.

Jordan Spieth and Patrick Reed
Spieth and Reed, two of the three U.S. Ryder Cup rookies, going up first thing in the morning against American slayer Ian Poulter and the only Scotsman playing in Scotland, Stephen Gallacher? The young guns don’t stand a chance, right? Well, they won the first hole, were six up after 11, and put the first point on the board for the U.S. after winning 5 and 4. Then U.S. captain Tom Watson curiously kept them out of the afternoon matches, of which the Americans didn’t win a single one.

Victor Dubuisson and Graeme McDowell
Just as Poulter’s past performances got him on the Euro squad as a captain’s pick, so too did Keegan Bradley’s on the American side. And he immediately proved his worth by teaming with Phil Mickelson to defeat Rory McIlroy and Sergio Garcia in the morning, running Bradley and Mickelson’s all-time Ryder Cup record together to 4-0. But then a rested Dubuisson and McDowell came along in the afternoon to give the mighty duo its first blemish. McDowell sank a lengthy putt on 16 to close out the match, 3 and 2.

Rickie Fowler and Jimmy Walker
It’s tough to label these two as duds considering they didn’t lose either of their matches Friday, halving both of them. But Fowler and Walker were two up with two holes to go in the afternoon against McIlroy and Garcia, and the Americans lost both holes. Credit must go to McIlroy for a 40-foot putt on 17 that kept the match alive, and to Garcia’s approach shot out of the rough on 18 landing on the green. But the Americans didn’t give themselves much of a chance. Fowler’s approach on 18 found a bunker, from which Walker failed to get it close and Fowler couldn’t convert the putt to win.

Ian Poulter and Stephen Gallacher
As previously mentioned, Poulter is a Ryder Cup star who can be counted on to bring emotion to his partner and the fans, while Gallacher is the only guy truly playing in his home nation. With those advantages, they were practically given a point as soon as it was announced they’d be squaring off against a couple rookies. But by the time they made the turn, Poulter and Gallacher were four down and they didn’t win their first hole until No. 12. Not surprisingly, they will not be paired together Saturday.

Bubba Watson and Webb Simpson
As soon as Simpson popped up his drive off the first tee – 190 yards?! – we should have guessed it wasn’t going to be a good day for this American pair. Watson and Simpson failed to take even a single hole against Rose and Stenson, so they logically were held out of the afternoon session. By that time, Simpson was trending on Twitter and even the PGA Tour took a dig at him: