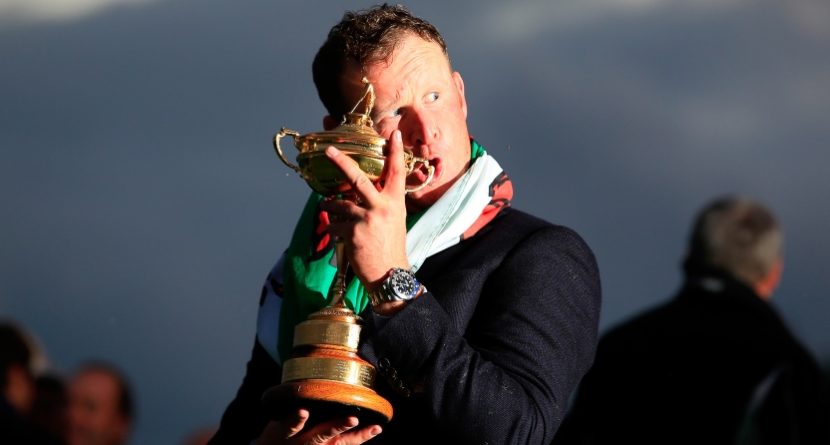 Europeans, apparently, are not morning people. But boy, when they wake up, they can play some golf. Their late surges on all three days of the 2014 Ryder Cup at Gleneagles propelled Team Europe to a 16.5-11.5 victory, its third straight triumph over Team USA and eighth in the past 10 events.

Europe obviously contained more studs than duds on its roster this year, but there were both sprinkled in each squad. Here is a look at the studs and duds from Sunday at Gleneagles:

Justin Rose: He played in all five sessions and never lost. He and Henrik Stenson set a Ryder Cup record on Saturday with 12 birdies in their four-balls victory, a majority of those rolling in off Rose’s putter. And on Sunday, Rose fell behind Hunter Mahan by four through seven holes, but proceeded to birdie the next four holes to draw even. Mahan took the lead back, but Rose dropped in another birdie on 18 to finish the match all square. Rose’s three wins and two ties gave four points to his squad, the most of any player.

Jamie Donaldson: The 38-year-old capped his first Ryder Cup appearance by clinching the cup for Europe. Donaldson was 4-up on Keegan Bradley on No. 15, needing only to halve the hole to secure at least the half point Europe needed to get to 14, and he did so by sticking his approach shot from 146 yards to a foot. Bradley could do nothing but concede the match, giving Donaldson a 3-1-0 mark in his Ryder Cup debut.

Patrick Reed: The brightest spot on the U.S. team was none other than Reed, the brash 24-year-old making his first appearance for Team USA. The kid handed world No. 5 Henrik Stenson his only defeat of the week (maybe he is a top-five player?), he never lost in four matches (3-0-1), and his 3.5 points earned were the most for the Americans. And he shushed the European crowd. Yep, he’ll be on Ryder/Presidents Cup teams for years.

Rory McIlroy: The world No. 1 went winless on Friday and didn’t notch his first win until Saturday afternoon, but he closed like a champ on Sunday. If you asked fans who they most wanted to see face each other in Sunday singles, most would have said McIlroy versus Rickie Fowler. The fans got their wish, but it was never a match. McIlroy was 5-up after six holes, Fowler won only one hole all day, and the 5 and 4 win gave Europe its first point Sunday. McIlroy finished 2-1-2 on the week, Fowler 0-2-3.

Graeme McDowell: The only player to win every match in which he competed, McDowell handled the rookies all week. First it was his teammate, Victor Dubuisson, forming a pair that went 2-0 in afternoon foursomes. Then McDowell went out first on Sunday and fell behind U.S. rookie Jordan Spieth early. Yet, after trailing by three at the turn, McDowell was all square by the 12th, and ended up winning 2 and 1.

Ian Poulter: Much was made of his passion, heroics and stellar record at the Ryder Cup – in fact, that was the only reason he got on the Euro squad, because his 2014 season hasn’t been great. But Poulter failed to win any of his three matches at Gleneagles, finishing the week 0-1-2 after salvaging a half point Sunday against Webb Simpson.

Bubba Watson: Three matches for the reigning Masters champ, three defeats. Watson wasn’t exactly bad, as he played a heck of a round Saturday morning and still fell to the hot putter of Rose. But Watson was the only American who failed to add anything to the scoreboard.

Stephen Gallacher: He comes out a winner because he played for Europe, but the lone Scotsman on the squad contributed nothing in his two matches. He and Poulter were crushed by U.S. rookies Spieth and Reed in the opening session, and Gallacher didn’t get to tee it up again until Sunday, when he watched Phil Mickelson drop in birdies on 15, 16, and 17 to take the singles match 3 and 1.

Webb Simpson: He popped up his first drive of the tournament, en route to a 5 and 4 loss with Watson, and didn’t called on again until Sunday singles (when everyone has to play). He managed a draw with Poulter, but Simpson didn’t do anything to validate the captain’s pick used on him.

Rickie Fowler: Only Fowler and Jimmy Walker played every session for the U.S., so clearly they were performing well enough to keep earning their captain’s trust. But unlike Walker, who won his singles match, Fowler was trounced by McIlroy, 5 and 4. So he placed in the top-five of every major this season, and was called upon to compete in all five sessions at the Ryder Cup, but Fowler has exactly zero wins to show for it. A great season that ended with a dud.