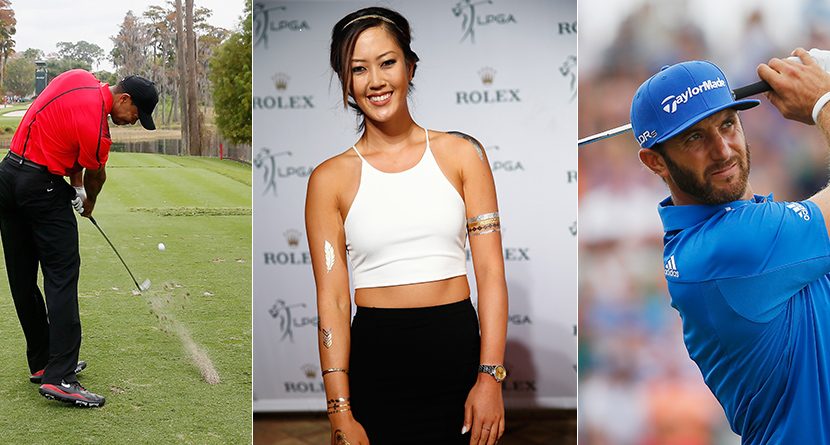 It’s 2015! Yes, two-thousand-fifteen. Goodness, where did the time go? I remember when I was young, without a single gray hair and Tiger Woods was the favorite at every major championship. Now, I have a few silver hairs, Rory McIlroy is THE MAN, and two of the biggest stars on the PGA and LPGA Tours were born in 1993 and 1997, respectively.

And with the PGA Tour kicking off this week, it seemed appropriate to toss out my predictions for the upcoming golf season because nobody else on the Internet had this brilliant idea (oh, everyone did this already? Damn!).

So, without further ado, here are 25 things that I think could happen in the new year.

Tiger Woods will have a big, big season
New swing, healthy body (or so he says), but most importantly, and this is something everyone is forgetting; Tiger has new motivation. Not since Tiger turned professional has a young player actually taken over the game of golf. David Duval had a cup of coffee up top. Ernie Els won the occasional major championship, and Padraig Harrington went crazy when Tiger was recovering from his first round of injuries, but never before has a young man coined as “The Next Tiger” actually done Tiger-like things.

Rory has done that, and Tiger knows it. Friends, sure, but Woods is as competitive as they come in this game and his motivation to take back that “Best Golfer on the Planet” title is there, and Rory is a factor. I guarantee that Woods has made it a mission to get the best of McIlroy on a big stage, and that’s where my next prediction comes in …

This major season is going to be awesome
So, yeah, I’ll say it; the 2014 major championship season was a bore. We had cool winners but in terms of drama, it was pretty weak. Bubba Watson won the Masters by three, defining the old saying that the Masters doesn’t start until the back nine on Sunday (it was the front nine this year that gave us fireworks, and the back nine was just Bubba hitting his driver like he was testing Nasa rockets). The U.S. Open was over on Saturday, and while we had a bit of drama at the British and the PGA, you never really got the feeling that Rory was going to lose.

So, that’s why I’m saying in ’15 we will have exciting majors. We are due. Seriously, even the Jason Dufner PGA was a bit anticlimactic down the stretch on Sunday, and Phil Mickelson won the British in ’13 before he drained that birdie putt on the 72nd hole at Muirfield (remember, Phil won that Claret Jug by three shots after all was said and done).

Augusta National will be great, as always, but I’m excited to see the guys take on Chambers Bay. And then we get the Old Course which is always awesome even if Tiger or Louis Oosthuizen are winning it by a good blackjack hand. And as for Whistling Straits …

Someone will break 63 in a major this year
And it will probably be at St. Andrews, if the wind doesn’t blow one day. Remember, in 2010 it was Rory McIlroy who stuffed it on 17 for a birdie that would have been good enough for the first 62 in major championship history, but missed that, only to birdie 18 for the 63. I think we see a 62 this year. Just a hunch. Speaking of historically low scores …

Someone will shoot 58 on the PGA Tour this year
In the history of the PGA Tour, we’ve had six 59s. Three have come since 2010. And this past year, we had our first 59 on the Champions Tour. These guys are getting so damn good at this game, it’s only a matter of months until someone either flirts with a sub-59 round, or pulls it off.

Bubba Watson enters the PGA Championship long drive contest
I think he learned his lesson in 2014. Bubba will pull the pink driver out at Whistling Straits.

Tiger Woods adds the Waste Management Open to his schedule
Considering he isn’t going across the pond to start his season, and wants the reps (drink!) to get ready for the Masters, I think this is a perfect time for his first start at TPC Scottsdale since 2001.

Fred Couples is your 2016 Ryder Cup captain
You know how they say, “money talks”? In golf, Tiger and Phil talk. Both are members of the Task Force, and both (not to mention a bunch of the young guys) like and want Fred Couples . The best part about the European Ryder Cup team is that they all seem to genuinely enjoy themselves at this event. The same can be said about the American President Cup team. So, Couples will be in charge in ’16. Bank on it.

Michelle Wie snags another major
A win and a second in the big five on the LPGA Tour in 2014 before her missed cut at the British and a finger injury kept her out of the LPGA Championship and forced her to withdraw at the Evian Championship. I say a healthy Wie is a shoo-in to snag a second major this season.

Jason Day takes the Masters
I covered this in my major preview, but I’m fairly confident a healthy Day will be in the hunt late on Sunday at Augusta National. A T-2 and third over his last four starts at this event, the Masters just seems set up for another Aussie champion.

The anchored putter group will have a rougher time in 2015 than 2016
You know those people that are scared of flying? And they worry themselves days before a long fight, only to handle it just fine once they board the plane and head to their destination? That’s how I feel about Team Anchor in 2015. Not all of them will have a rough year, but the fact that they can tinker this year with the safety net of a return to what’s comfortable to them feels like something that could be tougher to deal with mentally than just being forced to switch. Breaking up with someone only to have them texting you is one thing. Ending it and moving on is something completely different. I could see some of the guys that have leaned on the anchored putter for years struggle to find the right tool this season before before forced to switch in ’16.

Tom Watson and Phil Mickelson will not have dinner together in 2015
Call this a hunch, but I’m not sure you’ll be seeing these guys sharing sirloins at St. Elmo’s anytime soon.

Brooks Koepka wins on the PGA Tour in 2015
I feel this is almost cheating as a prediction. Let me add a wrinkle to it …

Oh, and Billy Horschel, too
A fiery American kid with a ton of talent who seems born for such an event? Sign me up!

Bubba is competitive for the first time at the British Open
I’ve been singing this one for months (years, really), but for some reason I just feel that Bubba and St. Andrews were made for each other (well, after Augusta National and Bubba). Watson has never finished in the top-20 at a British Open. That changes in ’15.

Henrik Stenson wins a major
In the last six majors, Stenson has been on fire, running into the hot golfer at the wrong time. At the ’13 British it was Phil and that Sunday 66. At the PGA, it was an unconscious Dufner. At the U.S. Open this past year it was the Robot That Is Martin Kaymer (his official name when he gets in that zone) and the PGA it was the Rory Show. He’s finished second once, third twice and fourth once over that stretch. He’s right there. I’m not sure which one he snags in ’14 (one of the reasons I didn’t pick him for an exact major on our show), but I feel he’s playing such good golf right now he’s due to take home a major, and seems to have the composure that it takes to leave with one of the big four.

Tony Finau has a great season, and leads the PGA Tour in driving distance
Move over Bubba and Dustin, there will be a new king of distance in 2015!

Rory has a disappointing season, by Rory standards
Now, now, everyone calm down. I’m not saying the guy is going to fall apart, but he has some factors going against him. First, one of Rory’s knocks has been his consistency. That was eschewed last season when Rory finished in the top-25 in every start he had on the PGA Tour (side note: holy mother!), but in the past, a run of success didn’t always continue. Remember at the end of 2012 when McIlroy won four worldwide tournaments in three and a half months including the PGA Championship? Well, that didn’t continue into 2013. I think Rory is still going to win tournaments, but I don’t see him having as huge of a season as others are expecting. That said, I hope I’m wrong.

Another 50-something will make a run at a PGA Tour major
Langer, Jimenez, Couples, Kenny Perry … distance isn’t the issue it once was.

Lydia Ko wins a major, cementing herself as the best teenager in LPGA history
A major win puts her at six LPGA wins, ahead of Lexi Thompson. This 17-year-old is for real, and has plenty of time to possibly get to double digit wins on this tour before turning 20. Goodness.

Rory McIlroy posts a workout picture on Instagram
By my count, he posted 10 in 2014. I only see that number rising!

The Internationals might not win the Presidents Cup, but it’ll be close
Adam Scott and Jason Day lead the rankings right now, with young guns like Hideki Matsuyama and Sang Moon-Bae pushing to make the team. If veterans like Ernie Els and Geoff Ogilvy can make the team, and if Charl Schwartzel and Louis Oosthuizen find their form again, this could be the year the Internationals end the Americans’ streak (so many ifs!).

Dustin Johnson is going to win a major in 2015
Oh, I’m crazy, huh?! Johnson, when healthy and actually, you know, playing professional golf, is still one of the best 30-and-under golfers on the planet. Since the 2009 PGA Championship, Johnson has seven top-10s in majors, with his best shot at a major coming at … Whistling Straits. On top of that, his best shot at a major each season is at the British, finishing in the top-15 four of the last five years at the one major across the pond, and St. Andrews seems like the type of course that sets up well for his ball flight.

“Shot patterns” will be Tiger’s go-to Tigerism of 2015
He loved it at the Hero World Challenge. Expect to hear more about shot patterns in the coming months. You just wait. It’s a process. Traj.