5 Athletes That Thrived In Their Teens 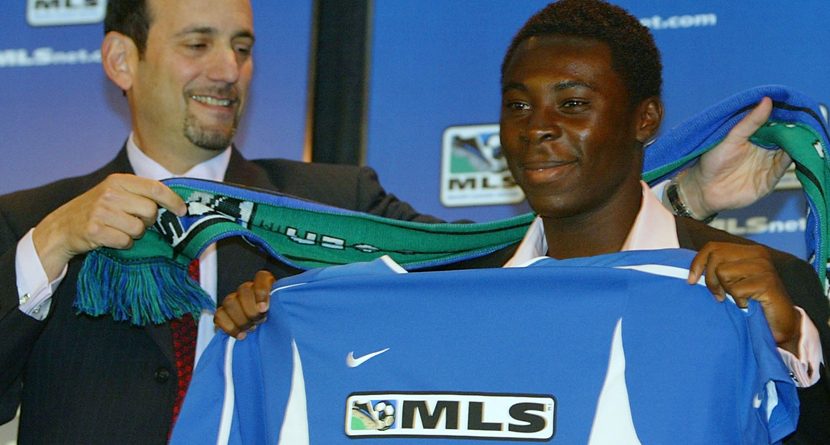 With rounds of 72 and 69, 14-year-old golfing sensation Tianlang Guan made the cut at this weekend’s Zurich Classic in New Orleans.

That makes the Chinese teen two for two: He made the cut in the Masters two weeks ago, his golf debut on American soil. He was also the low amateur at Augusta, despite a slow-play penalty.

It’s painfully obvious that this kid has a boatload of potential. So in the spirit of this talented teen, here’s a list of five other athletes who thrived as teenagers in professional sports.

Andrew Bynum – Basketball
Bynum was the youngest player in NBA history when he played his first game for the Los Angeles Lakers at 18 years, six days in 2005. During Bynum’s second season, Shaquille O’Neal dunked over him. The 19-year-old responded by slam-dunking around Shaq on the next play, and then threw an elbow at the big man as they ran down the court. O’Neal elbowed him back and the pair had to be separated. Talk about making your presence known. Katie Ledecky – Swimming
At age 15, Ledecky made the 2012 U.S. Olympic team as the youngest member of the American squad. Any nerves she might have had entering London were not evident during her performance in the 800-meter freestyle, in which she toasted the field and won the gold medal by more than four seconds. Her time broke the American record and came within a half second of the world record. Note: Ledecky is still an amateur athlete, but she beat a pool filled with professionals in London.

Freddy Adu – Soccer
Adu made headlines at age 14 when he became the youngest person in history to sign a professional soccer contract. Think about that. What were you doing at age 14? Most likely you were going to school, shooting hoop with your buddies and maybe squeezing in some homework after dinner with your parents. Running up and down a soccer field as a professional probably wasn’t on your schedule.

Alexis “Lexi” Thompson – Golf
At the ridiculously young age of 12, Thompson qualified for the 2007 U.S. Open. Obviously, she was the youngest player to ever earn a bid in the tournament, although she fired rounds of 86 and 82 to miss the cut. She qualified at ages 13 and 14 as well before turning pro at age 15 (what took her so long?). Thompson has since won three tournaments. Joe Nuxhall – Baseball
Nuxhall is the youngest person to ever appear in a Major League Baseball game, a feat he accomplished at age 15 in 1944. Playing for the Cincinnati Reds, the southpaw pitched 2/3 of an inning. He struggled a bit and allowed two hits and five runs, and then “retired” after his appearance. But Nuxhall returned to the sport in 1952 and went on to play for 15 more seasons. His career stats: 135-117 with a 3.90 ERA.