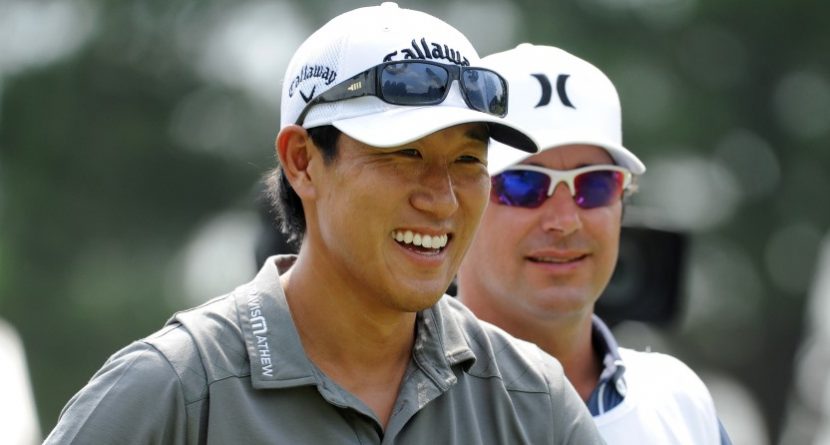 Scores went low over the weekend at the Sony Open in Honolulu. So low, in fact, that if you shot even-par through the first two rounds, you didn’t make the cut.

Holes 9 and 18 can be largely to blame, as they yielded 493 birdies over the four rounds. Furthermore, those two holes allowed 37 eagles too. Yet, compared to last year on the same course and the same two holes, this was a down year; 520 birdies and 43 eagles were had on Waialae Country Club’s ninth and 18th holes in 2013.

Plenty of pros reached the green in two to putt for eagles, but a handful of other guys took the more dramatic route. Here are the five best hole-outs for eagle from the Sony Open this past weekend:

4) To close out his first round in Honolulu, rookie Brice Garnett chipped in for eagle to card a 3-under 67. He went on to birdie that 18th hole in the following three rounds, and he finished T-38 (6-under overall).

3) Fellow rookie Kevin Foley also closed out his opening round with an eagle, but he accomplished the feat on the 506-yard, par-5 No. 9. That gave him a 3-under 67 in his first round of golf on the PGA Tour. Unfortunately, Foley couldn’t stay that low and didn’t make the Saturday cut.

2) Peter Malnati didn’t take his chances with rolling in his third shot on No. 18 on Sunday – he just drained it in the air. You can see by his reaction that he thought he’d sailed his shot past the cup, but in fact, he was spot on. The score of three on his final hole of the tournament pushed him up with Garnett at T-38, which paid $22,400. That’s nearly $10,000 more than Malnati would have received had he made par on the hole, which was likely if he didn’t swish the chip.

1) The finest eagle of all, however, has to be the double eagle – or albatross – at No. 9 from James Hahn on Friday. From 193 yards out, he watched his second shot trickle straight into the hole. “Perhaps the rarest feat in all of golf.” But that wasn’t even the only albatross in the pro game on Friday; one occurred in South Africa too.