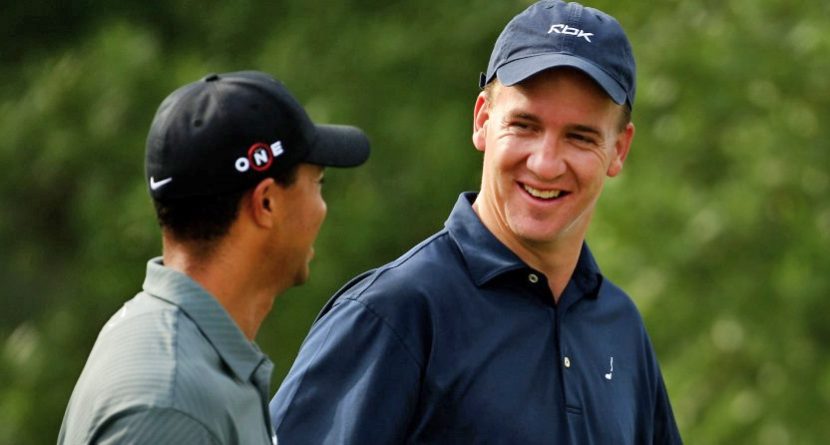 For every NFL player except those fortunate enough to put on jerseys of the Denver Broncos and Seattle Seahawks, it’s golfing season. Not every NFL players is a golfer, but you can be sure that many who are hackers have already escaped to a warm locale with clubs in tow.

But there’s a handful of NFL golfers for whom there’s still one big game left to play. They’ll be free to swing away come this time next week, even if they do go to Disneyland. Here are the five best golfers playing in Super Bowl XLVIII:

Peyton Manning, Broncos QB
He’s kind of living the dream. Manning is arguably the greatest quarterback of all-time, he’s a witty pitchman who’s made millions in endorsements, and his golf handicap hovers around five. Prior to his record-breaking NFL season, he sank a hole-in-one at the finest course near Denver, shot a 77 at Augusta National, and teamed with Tom Brady to defeat some businessmen in a private game. The first place Manning probably goes after the Super Bowl – win or lose – is to the golf course.

Wes Welker, Broncos WR
The diminutive wideout’s last known handicap was a 15, so not on the level of Manning, but who is? Welker once took golf lessons in order to better compete with Brady, his former QB, so he clearly seeks to keep his golf game sharp. Another offseason with Manning might help accomplish that.

Eric Decker, Broncos WR
Decker is one of those all-around athletes, starring in football, baseball and basketball in high school, and then football and baseball in college. He was even selected in the MLB Draft prior to the Broncos taking him in the 2010 NFL Draft. So had he given golf much effort, Decker might’ve excelled on the course too. He showed off a nice swing on his reality show with wife Jesse James.

Richard Sherman, Seahawks CB
There appears to be fewer golf aficionados on the Seahawks, but the loquacious Sherman is one of them. Now, is he a good golfer? Well, he may be the best corner in the game (you might have heard him say as much), but it’s a different story on the links.

Golden Tate, Seahawks WR
Although Tate is a right-handed golfer, he holds his clubs with lefty’s grip: left hand below right hand. That odd grip shocked a couple senior PGA players when they took part in a closest-to-the-pin contest with Tate, but the wide receiver actually beat one of the pros. Surprisingly, his swing’s not that bad: