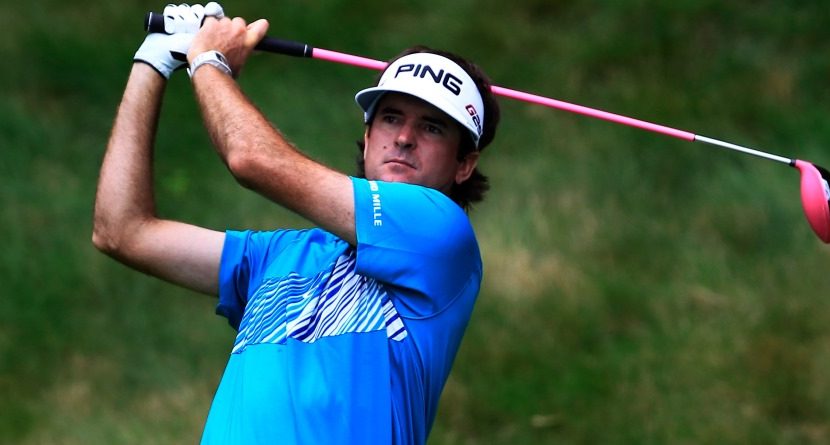 The 2013 MLB Home Run Derby launches Monday night at Citi Field in New York, where Prince Fielder will attempt to defend his title. But if production from the first half of the season is any indication, Chris Davis is the runaway favorite. His 37 home runs lead the league, by far.

Yet, the distance those baseballs will travel is nothing compared to the yardage covered by golf’s big hitters. To wit, it’s 408 feet from home plate to dead-center at Citi Field. That converts to 136 yards, or a pitching wedge for most pro golfers.

We know, we know – a baseball’s bigger and heavier than a golf ball. But have a little fun here. Imagine, in conjunction with MLB’s annual Home Run Derby, that they allowed golf’s biggest hitters to tee it up and try to send one literally out of the stadium. The drives would need a lot of loft, but at Citi Field, there’s some space a ball could sneak out of on either side of the centerfield jumbotron. We’d tune in to watch that.

Until then, we’ll just marvel at the best long-ball hitters on golf courses, past and present:

The PGA Tour leader in driving distance last year, Watson finished second from 2009-11 and was also the leader in 2008. Should he get his average back up to the 315.5 yards it was at in 2012, he’d again lead the tour. As he stands now, though, Watson sits fifth at “just” 304.1 yards. The fact that he’s also ranked No. 16 in the world for his overall game means he best takes advantage of his distance off the tees.

The 29-year-old is the reigning RE/MAX World Long Drive Champion, as he won in October with a 343-yard drive. If that seems impressive but not as long as you were expecting, that’s because it was rather mediocre; wind played a large factor on tournament day. It’s nothing compared to Winther’s official RE/MAX World Long Drive Championship distance record of 469 yards.

She’s currently second in average driving distance on the LPGA Tour right now at 271.5 yards, and hasn’t finished lower than fourth in the past seven years, the most consistent of any woman. Lincicome’s best season was 2006, when she averaged 278.6 yards per drive. She came close last year at 276.08.

In 1992, Cooper was just your average pro golfer trying to stick on the PGA Tour. It didn’t help his game, maybe just his name, when he launched a 787-yard drive on a 456-yard par 4 at the Texas Open. What? How? The cart path. Cooper’s wayward ball landed on the concrete, bounced and bounced and kept rolling, finally coming to a stop some 300 yards past the green for which he was aiming. He double-bogeyed. So while he wasn’t known as a big hitter, and his drive didn’t officially enter the PGA record books (only certain holes were used to record distance back in the day), Cooper is believed to have hit the longest drive ever.

According to the Guinness Book of World Records, the longest recorded drive in a competition belongs to Mike Austin, who drove a ball 515 yards at the 1974 U.S. Nationals Senior Open, reportedly aided by a 30-mph tailwind. It flew off steel shafted wood driver, and how one of today’s technologically-advanced clubs hasn’t smashed that record, we have no idea.