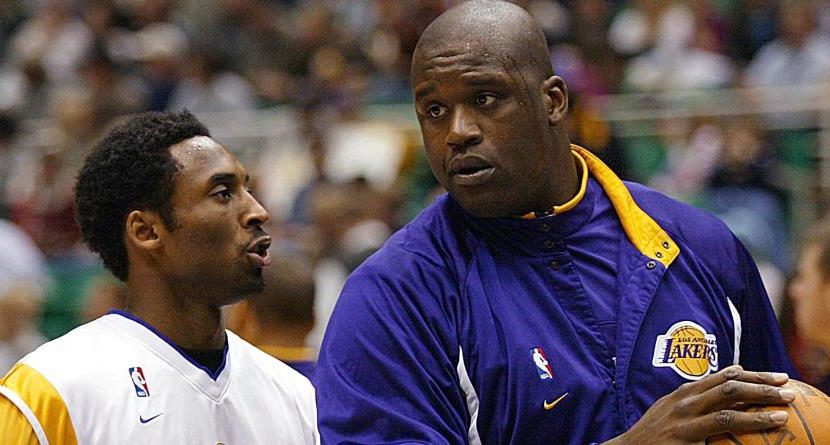 How about that weekend at TPC Sawgrass? Tiger Woods won. Sergio Garcia sank at No. 17. And they got into a little war of words.

Tiger definitely got the last laugh, because winning always trumps talk. But it would have been a less interesting weekend had Sergio not started chirping. The best of the Spaniard’s quotes: “I’m not going to lie. He is not my favorite guy to play with. He’s not the nicest guy on tour.” #NotMyFavoriteGuy will soon be trending.

Tiger’s top line: “Not real surprising that he’s complaining about something.”

True, the words really are not that harsh. But this is pro golf – outspoken characters are about as rare as a swing-and-a-miss.

But they make for a good sports squabble, earning mention alongside these other famous feuds:

Kobe Bryant & Shaquille O’Neal: #NotTheOneBuyingLove
The Los Angeles Lakers won three NBA titles with Kobe Bryant and Shaquille O’Neal at the forefront, but the championships didn’t come without drama. It started immediately, as they both joined the Lakers in 1996 – Shaq as a four-time NBA All-Star from Orlando; Kobe as a much-heralded rookie out of high school. Shaq often chided Kobe for being selfish, and Kobe once claimed Shaq paid “his women not to say anything.” Then again, Kobe often called Shaq selfish, and Shaq retorted that he was “not the one buying love.” The list with these two could go on, but we’ll move on.

Donovan McNabb & Terrell Owens: #NotTheOneWhoGotTired
Early in 2004, Philadelphia Eagles quarterback Donovan McNabb campaigned to get wide receiver Terrell Owens to Philly. His wish came true, and things began swimmingly for the Eagles that year, as they won 13 of their first 14 games. But as the games wore on, Owens’ constant griping about being open wore on the QB. Then, in that 14th game, Owens broke his leg, leading McNabb to say, “We do not have to replace T.O.” He meant the team would spread the ball around, but Owens took offense. The Eagles reached the Super Bowl without Owens, who then surprisingly played in the game despite a leg that wasn’t completely healed. Philadelphia lost to New England, and soon thereafter, Owen said, “I’m not the one who got tired in the Super Bowl,” referring to McNabb. After seven games in 2005 – and more comments directed at McNabb, like one saying the team would be better off with Brett Farve at QB – Owens was suspended and subsequently released by the Eagles.

Roger Clemens & Mike Piazza: #NoRespectNow
It started in July 2000, when the New York Yankees’ Roger Clemens beaned the Mets’ Mike Piazza in the head. It gave Piazza a concussion and forced him to miss the All-Star Game. “Roger Clemens is a great pitcher, but I don’t have respect for him now at all,” Piazza said. He changed his opinion of Clemens because he thought the pitch was intentional – possibly because he’d homered off Clemens in three straight games — but the claim didn’t gain much traction until the 2000 World Series, when the Mets and Yankees squared off again. In Game 2, Piazza’s bat broke as he hit a foul ball and started to run toward first. The barrel of the bat bounced toward Clemens, who chucked it toward the first-base dugout – and alarmingly close to Piazza. Clemens claimed he was just tossing the bat off the field, but the force with which he threw it nullifies that notion.

Reggie Miller & Spike Lee: #MillerTimeInNY
Spike Lee is the New York Knicks’ most fervent fan. Reggie Miller might be the player most hated by all Knicks fans. Generally, Knicks supporters appreciate Lee’s courtside antics at Madison Square Garden, but when his jawing helped spur Miller to drop 25 fourth-quarter points on the Knicks in Game 5 of the 1994 NBA Eastern Conference Finals, not so much. At one point, Miller stared at Lee and wrapped his hands around his own neck, indicating that the Knicks were choking. The next day’s headline on the New York Daily News: “Thanks A Lot, Spike.” Miller taunted Lee again in the next season’s playoffs, after he scored eight points in the final 18.7 seconds, abruptly turning a six-point deficit into a two-point victory.

Martin Brodeur & Sean Avery: #FatsoForgotToShakeMyHand
Sean Avery was always known as an agitator, and he got under the skin of New Jersey Devils goalie Martin Brodeur in the 2008 NHL Playoffs. On a 5-on-3 power play for the New York Rangers, Avery abandoned all hope of receiving the puck so he could face-screen Brodeur. Guys always try to get in the goalie’s way, but they usually face the action. (Avery’s tactic was legal at the time, but later became a penalty known as the Avery Rule). Oddly enough, Avery ended up scoring on that power play. After the Rangers won the series, Brodeur refused to shake Avery’s hand, prompting Avery to say, “Fatso forgot to shake my hand.” That was one of many scuffles.