5 Crazy Golf Stories from the Weekend 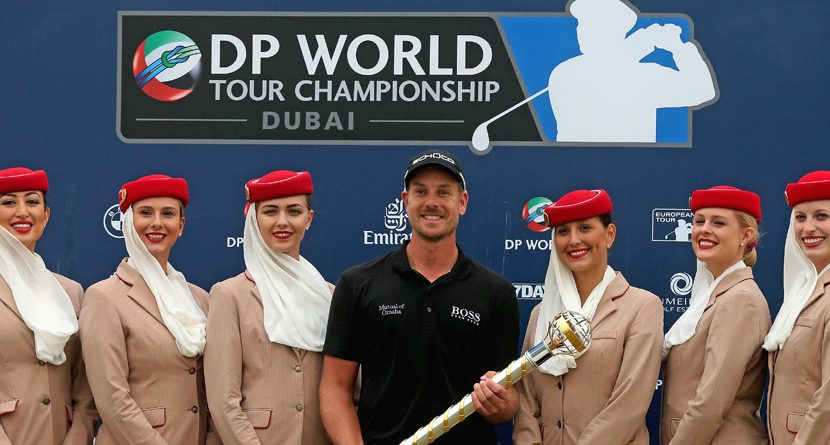 Considering this is golf’s “offseason,” there’s some pretty fantastic feats taking place on a near-weekly basis. Consider this weekend among the best.

Henrik Stenson is the best player in the world
Tiger Woods may have earned PGA Tour Player of the Year honors, but in relation to the elite golf played all over the world this year, Henrik Stenson might be your man. On Sunday, the Swede became the first golfer to win the FedExCup (PGA Tour) and Race to Dubai (European Tour) in the same season. While the $10 million bonus that comes with the FedExCup may trump the $1 million check for the Race to Dubai title, Stenson is nothing if not clutch. He won both tours’ season-ending tournaments to emphatically clinch the big bonus checks, and his 25-under 263 at the DP World Tour Championship on Sunday was six strokes better than runner-up Ian Poulter, with whom Stenson had a silly side bet going.

Adam Scott is the best player in the world
The man who gave Woods a run for his money in the PGA POY race was Adam Scott, who on Sunday made it two-for-two in Australian majors. The Aussie won the Australian PGA Championship last week, then took the Australian Masters this week in Melbourne. Scott’s 14-under 270 topped Matt Kuchar by a couple strokes, a surprising turnaround considering the American led by a pair of strokes with four holes to play; Kuchar double-bogeyed 18.

Jarrod Lyle impresses the world
Yet, Scott’s triumph was not the best story to come out of Australia this week. That honor belongs to Jarrod Lyle, who competed in his first tournament since a second bout with leukemia, which forced him away from golf for 20 months. He made an emotional return Thursday, then surprised himself by playing well enough to make the cut. Lyle finished with an 8-over 79 and in 57th overall (8-over) after going 72-71-70 the first three rounds, but he rightfully received some of the loudest cheers all week.

Harris English reaches Rory McIlroy level
At the PGA Tour event down in Mexico, the biggest news might have been that everyone escaped without any crocodile attacks. But also impressive was 24-year-old Harris English, who picked up his second career PGA Tour win at the OHL Classic in Playa Del Carmen. He played 29 holes Sunday and carded a tournament-record 21-under 263. Only Harris and Rory McIlroy are active players under 25 with more than one PGA Tour title.

Jason Day tragically loses family members
This one is not crazy in a good way. Australian Jason Day, whose mother is from the Philippines, learned that his grandmother, uncle and six cousins died in the typhoon that hit the Philippines. “I am deeply saddened to confirm that multiple members of my family lost their lives as the victims of Typhoon Haiyan,” the 26-year-old said Sunday in a statement from the PGA Tour. “My family and I are thankful for all who have reached out with their prayers and concern. We feel devastated for all who have been affected by this horrific tragedy.”