5 Most Memorable Moments from 2013 FedExCup Playoffs 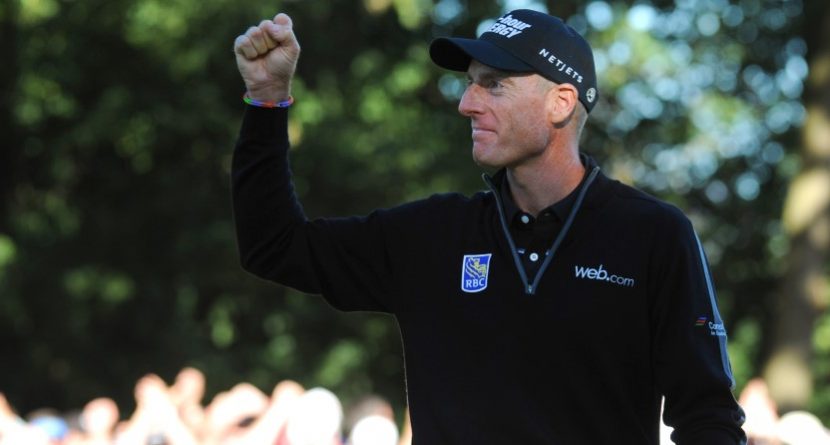 Because we’re not one to let a good thing fade, we’re still reminiscing about the recently completed FedExCup playoffs. Here are our top five moments from the four-event series:

5) Rickie Fowler and Jonas Blixt copy outfits and tee shots
Fowler and Blixt are both sponsored by Puma, so Blixt thought it would be funny to dress like his more-famous counterpart if the two were ever paired together on a final-round Sunday, the days on which Fowler is known for dressing in all orange. The Swede stayed true to his word when the Puma pals were indeed paired together for the final round of The Barclays, the first playoff event. And not only were they dressed alike, they hit identical tee shots at the first hole, as their balls collided in the fairway.

4) Tiger Woods endures back pain, still nearly forces playoff
Adam Scott won The Barclays, but Tiger Woods showed he was right there with the Aussie in the fight for Player of the Year. Woods tweaked his already sore back at No. 13 during the final round, but still came up with birdies on 16 and 17. He had a birdie putt at 18 to take a share of the lead, but the ball halted an inch short. Still, Woods stayed in the 60s for an entire tournament for the first time this PGA Tour season.

3) Jordan Spieth fires final-round 62 to get on Presidents Cup squad
The Deutsche Bank Championship served as the playoffs’ second leg, as well as the last tournament in which players could earn spots on the Presidents Cup squads. As if auditioning in the final hour, the 20-year-old making his FedExCup playoff debut shot a 9-under-par 62 in his final round, which he closed with three birdies and an eagle at 18. Spieth tied for fourth overall, which turned out to not even be his best playoff finish (he tied for second in the Tour Championship), but it convinced U.S. Presidents Cup team captain Fred Couples to include the rookie on his squad.

2) Jim Furyk cards the sixth 59 in PGA Tour History
After Furyk opened the BMW Championship with a 1-over-par 72, no one could have guessed he’d turn in the best round of the season the next day. But the 43-year-old was feeling it early and often in the second round, which he opened with three straight birdies and finished 12 under par. He needed to stick his 103-yard approach shot close to the final hole to have a chance at 59 – three feet, three inches from the cup was good enough.

1) Henrik Stenson becomes the first European to win the FedExCup
Stenson’s career has been a bit up and down, so it was only fitting to watch him ride a roller coaster in the playoffs. After three straight top-three finishes (two of which were in majors), Stenson stumbled to a T-43 at The Barclays. But he came back next week for the Deutsche Bank, put together four rounds of 67 or better and won his first PGA Tour event since 2009. Stenson’s struggles returned at the BMW, where he tied for 33rd and smashed a driver in the process, but he shot an opening-round 64 at the Tour Championship to take the lead and never give it up. Two wins in four playoff events gave him the FedExCup, which comes with a $10 million bonus.

Other Hot Links:
– Crazy Money: How $11.4 Million Compares to Other Sports
– Inside Voice with Javier Colon
– George Bush on Obama: ‘He Oughta Play Golf’