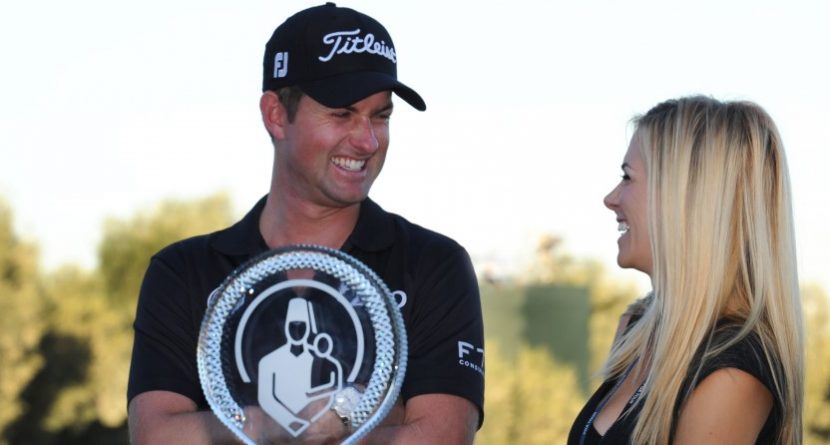 The PGA Tour swung through Las Vegas this weekend for the Shriners Hospitals for Children Open at TPC Summerlin, and if your money was on another first-time winner, pay up. A former major champion took the title, but his wasn’t the only notable performance from Las Vegas.

Webb Simpson: The 2012 U.S. Open victor cruised to his first triumph since claiming that major, rolling to a 6-stroke win after four rounds of 67 or better. Simpson opened with a 7-under 64 on Thursday, followed up with a 63, then regressed over the weekend to a 67 and closing-round 66. The 24-under 260, which featured only four bogies all tournament, earned a cool $1.08 million for his fourth PGA Tour title.

Ryo Ishikawa: Settling in for a tie at second (how often do you shoot 18-under and finish SIX strokes back?!) was the diminutive Japanese 22-year-old, who just regained his PGA Tour card via the Web.com Tour Finals. Ishikawa’s 65 on Sunday, one shot off the day’s best, allowed him to match his career-best finish and give him the biggest PGA paycheck of his career ($528,000).

Troy Matteson: The streak of the week goes to Matteson, who you could say was in the zone from holes 9-15 on Sunday. He birdied every single one of them – seven in a row – and came up just one shy of the tournament record. His 7-under 64 tied three others for low round of the day and his T-5 marked his first top-10 since 2012. The Wyndham Championship that year was also the last time he stayed in the 60s for an entire tournament.

J.J. Henry: The round of the week goes to Henry, who rolled a 60 in Vegas on Thursday. He sank a 50-foot eagle putt to close out his day, giving him a career-best round and lowering the course record at TPC Summerlin. It’s tough to back that up, though, as the Back9 ambassador shot 71-70-70 over the next three rounds to come in at a tie for 15th (-13).