5 Notable Performances from the CIMB Classic 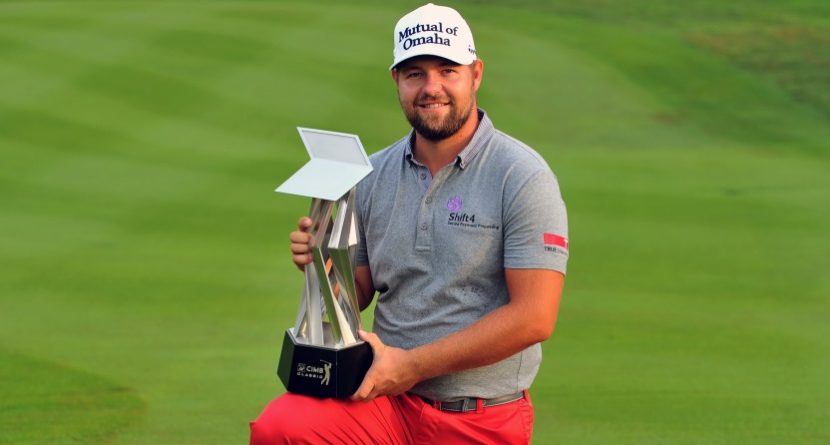 After 3.5 hours of rain delays Sunday that led to darkness preventing Gary Woodland and Ryan Moore from finishing things off at the CIMB Classic in Kuala Lumpur, Malaysia, they needed only one hole Monday morning for the playoff. Moore birdied the par-5 18th while Woodland parred, thus giving Moore his third career PGA Tour victory.

Both players were among the noteworthy performances from the weekend:

Ryan Moore: He held a share of the lead heading into Sunday, and still had part of it as he moved to the back nine, but a bogey at 12 dropped him back one. Moore grabbed birdies at 14 and 16 to again pull even with Woodland, but all looked lost when Moore was still in the fairway hitting his fourth shot on 18. He stuck his approach six feet from the hole, though, and saved par to force the playoff. Sleeping with that memory, Moore stuck a similar approach Monday — only this time it gave him a short birdie putt, which he calmly sank. That awarded Moore $1.26 million, the largest check of his career.

Gary Woodland: A late-season surge got the 29-year-old into last month’s Tour Championship (which comprises only the top 30 in the FedExCup standings), and despite missing the cut at his first event of the new 2013-14 season, he found his form again in Malaysia. Unfortunately, he missed a 10-foot birdie putt at the 18th on Sunday that would have handed him his third career PGA Tour title, and he parred the hole again Monday to lose the playoff.

Kiradech Aphibarnrat: Also very much in the mix at the top was Aphibarnrat, looking to become the first winner on the PGA Tour from Thailand. He captured the Malaysian Open earlier this year on the very same Kuala Lumpur Golf and Country Club course, and his familiarity showed. But after four birdies on the front nine, he bogeyed No. 10 and could manage nothing but par the rest of the way. He settled for a tie for third. A win also would’ve given Aphibarnrat a two-year exemption on the PGA Tour.

Keegan Bradley: The tournament looked to be all Bradley’s, as he surged to a 13-under start through two rounds. But after only one bogey in two days, Saturday came and saw four bogeys and a double-bogey. He evened out a bit on Sunday with an even-par 72, but he finished a disappointing 10th. Maybe he was getting too many updates on the Red Sox struggling to a 2-1 deficit in the World Series?

Rickie Fowler: Bradley still finished better than his buddy and enemy this week, Fowler, who’s a fan of the Cardinals, the other team in the World Series. Fowler couldn’t get under 70 until Sunday, when he carded a 67 and finished 5-under overall, jumping from T46 to T19. Fowler dropped four birdies on the back nine, three of which came on the final three holes. Maybe he was inspired by the Cards?