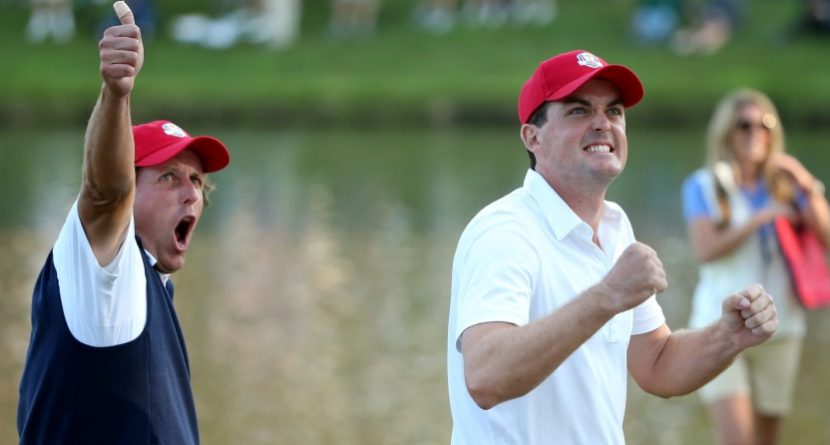 No matter what the Europeans try to get you to believe, they are the favorites for the 2014 Ryder Cup at Gleneagles in Perthshire, Scotland. They’ve won this international duel seven of the past nine times, and haven’t lost at home since 1993. And this year, the European Ryder Cup squad features four of the top six players in the world rankings, compared to just one for the U.S.

For the Americans to pull off the upset, though, they’re going to need some stellar performances from a few key guys. These five players need to step up for Team USA:

Keegan Bradley: He was not picked for his strong play this season (he set career lows for money and FedExCup ranking); Bradley was selected by captain Tom Watson because he’s proven to be a stud in team matchplay before. He paired with Phil Mickelson to go 3-0 at the 2012 Ryder Cup and 2-1-1 at last year’s Presidents Cup. Bradley lost his singles match at both of those events, so he’d help the U.S. a ton if he could win on his own, but he’s clearly in Scotland to exchange high-fives with Mickelson. And because he’ll exhibit more passion than anyone in red, white and blue.

Phil Mickelson: As for Bradley’s inevitable partner, Mickelson is the leader of the entire squad. With 38 matches played and a streak of earning his way onto the team every year since 1995, he boasts more Ryder Cup experience than anyone who will be at Gleneagles. So he needs to play like it. Mickelson failed to grab a win this year for the first time since 2003, which was the last time he earned less than $3 million until this year. He wasn’t even assured a spot on the team until his somewhat surprising runner-up finish at the PGA Championship, his only top-10 of the year. But the 44-year-old wanted rest before the Ryder Cup, and he got it by not qualifying for the Tour Championship, so he’d better be rested and sharp.

Rickie Fowler: One way to atone for all the near misses in majors this year would be for Fowler to lead the U.S. to Ryder Cup glory. If there’s one American who wants to take on world No. 1 Rory McIlroy, this is the guy. Fowler placed in the top five at all four majors this year, and in the last two had to watch McIlroy edge him out. Beating McIlroy in a Sunday singles match might make up for some of that.

Jim Furyk: The other trusty veteran on the U.S. squad, Furyk arguably had the best season of any American. Only McIlroy (12) posted more top-10 finishes on the PGA Tour than Furyk (11, tied with U.S. teammate Matt Kuchar), and no one in the world other than Furyk played at least 20 PGA Tour events and made the cut each time. His four runner-up finishes this year don’t exhibit the killer instinct you want at the Ryder Cup, but Furyk’s consistency will put him in contention for nearly every match.

Bubba Watson: He was the longest hitter on the PGA Tour this year and led the U.S. in qualifying points for the Ryder Cup squad. Watson finished second on the PGA Tour money list and he was the only American to win a major this year. But until a runner-up finish at the BMW Championship a couple weeks ago, much of Watson’s damage came early in the year – six top-10s in his first nine starts of 2014. The Americans need that Bubba, not the one who missed the cut at the U.S. Open and Open Championship before taking a T-64 at the PGA Championship. He’s a respectable 5-5-1 lifetime in the Ryder Cup, and Gleneagles’ PGA Centenary Course is a 7,243-yard par 72, so Bubba can bring out the big stick.