5 Reasons Bubba Watson is Not Your Average Golfer 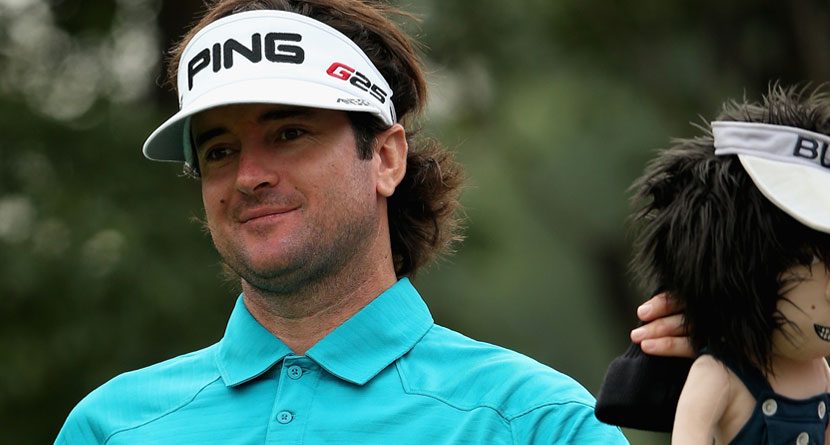 It’s becoming a debate between Watson and Phil “Lefty” Mickelson, who owns three green jackets and five total majors. Watson has the two Masters wins, but until he grabs a few more majors, the left-handed honor probably remains with Mickelson at least until he joins the senior tour. He’s 43 to Watson’s 35.

What’s not debatable is Watson’s quirkiness. But sometimes quirky can be cool. Regardless, Watson is not your average golfer. Here are five reasons why we love us some Bubba Watson:

1) He drives a bulletproof truck: It’s a 2013 Ford Raptor Super Crew Cab, with the entire exterior bulletproof (including the windows) and wrapped in a black digital cammo print. On the front is an Oakley grille, and built into the hood is an Oakley logo. The interior features lime green in the leather stitching on the seats, in the Oakley logo on the head rests, on the doors and on the console. 2) The man really engages with fans: Last fall he held a contest to find his biggest fan, and in the end he chose two families to fly down and meet him in Phoenix at the Waste Management Open in January. He almost won that event, taking runner-up. Watson also does live Twitter chats with fans. Just search “#BubbaTalkLive.”

3) He’s a goofball and for that, you’re welcome: Most athletes enjoy ESPN’s SportsCenter show; Watson maybe a little more than others. He once made his own SportsCenter video with hopes of getting on the show, then later posted another video and actually got on the show. The folks at ESPN even gave him the opening role in a commercial.

4) The thing he may be most proud of is his son: Watson and his wife, Angie, adopted a son, Caleb, soon before he won the 2012 Masters. With his green jacket on, Watson expressed how badly he wanted to get home and celebrate with his family. The father now posts a lot of videos of his toddler emulating Pops around the golf course, like this and this.

5) The man had a watch made for him: Richard Mille developed tourbillon watch for Watson, the RM 38-01 Bubba Watson, a timepiece that combines a patented G-sensor with a tourbillon mechanism, which helps golfers by providing new insights into their games.