5 Stories from Saturday at The Open Championship 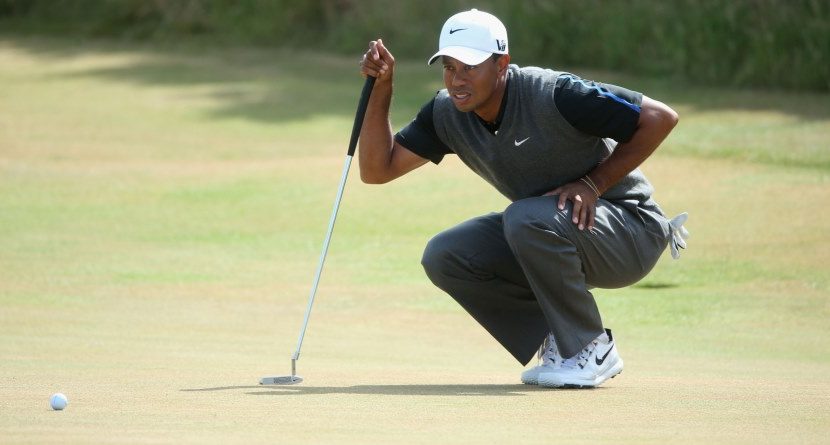 Lee Westwood owns the lead, Tiger Woods is lurking in second, and the guy we’d most like to see win, Miguel Angel Jimenez, is not going to win. Here are five storylines that transpired from Saturday at the 142nd Open Championship at Muirfield:

It’s Lee’s lead to lose
The 40-year-old Westwood boasts a two-stroke advantage over the field after besting playing partner Tiger Woods by two strokes on Saturday (a 1-under 70 to 1-over 72). And it’s Westwood’s putting that has put him in this position – he has a tournament-leading 26 one-putts. A victory would mark Westwood’s first win in his 62nd major appearance, which have included seven finishes in the top 3.

Tiger isn’t out of it, but he is
Woods is in a good spot to claim his 15th career major and first since 2008; he’s two strokes behind Westwood. Other than the 2009 PGA Championship, when Woods held the lead, it’s the best position he’s been in after 54 holes at a major since that ’08 U.S. Open. But in each of his 14 major wins, he’s owned the lead going into Sunday.

Hunter on the prowl again
After posting 1-over 72’s on both Thursday and Friday, Hunter Mahan shot up the board with a 68 on Saturday, tied for the lowest score of the day. He’ll be in the final group with Westwood and also seeking his first major. Mahan has never finished better than fourth in a major, and that result came at the U.S. Open last month, when he also made it into Sunday’s final pairing. He entered the day one shot off the lead but carded a 5-over 75.

Tiger, meet my caddie, Steve
Adam Scott, the reigning Masters champ, has been a bit over looked this week, but is only three shots back and could win his second major of the year. He’ll be paired with Woods on Sunday, meaning we get another awkward hand-shaking session between Woods and his former caddie, Steve Williams, who’s now on Scott’s bag after an acrimonious split from Woods. Scott’s three days at Muirfield: 71-72-70.

Win or lose, Jimenez will wine
The 36-hole leader, Miguel Angel Jimenez, tumbled down to 11th place with a 6-over-par Saturday. We’d say he succumbed to the pressure, but we think he just might not care about pressure. He enjoys what he enjoys – cigars and wine – and just happens to also be really good at golf. If he wins, great. If he doesn’t, great. Knowing his proclivity for night life, Jimenez was asked Friday at a press conference when he’d go to sleep that night. “When I feel like it. And only after I smoke my cigar. Why, because I have the lead, now I must go to bed at 10? No, this is bulls—.”