5 Takeaways from the Tour Championship 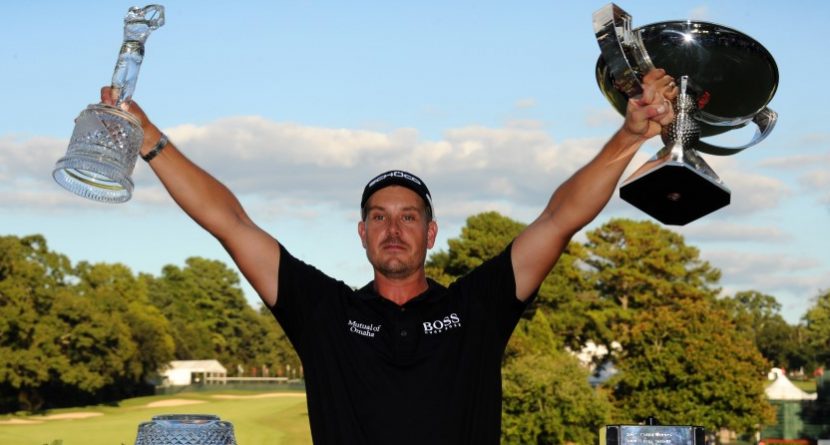 A week ago, Henrik Stenson smashed his driver to the ground in frustration. On Sunday, he made enough money to buy a new driver every day for the rest of his life. Well, maybe that’s a bit of an exaggeration, but you get the point: He collected a lot of coin.

Stenson’s stellar victory at the Tour Championship is, of course, one of the major takeaways from the weekend:

Stenson a Swede of steel
The Swede seized the tournament lead on Thursday with a first-round 6-under-par 64, and never gave it up. He took a four-shot advantage into Sunday, it narrowed briefly down to one when the ever-impressive 20-year-old Jordan Spieth made a charge with four straight birdies on the back nine, but after a bogey on 14, Stenson steadied himself with a birdie on the next hole. He parred out from there to finish 13-under and collect the Tour Championship trophy, which comes with a $1.4 million check. More importantly, the triumph also handed him the FedExCup, which comes with a cool $10 million. He’s the first European to win the Tour Championship and the FedEx Cup, and after his fourth career PGA Tour victory, maybe the announcer at East Lake Golf Club in Atlanta will learn to put that name with his face:

Tiger Woods is the Player of the Year
The FedExCup leader entering the season’s final event, Woods was far from impressive in Atlanta. He improved by two strokes each day, but it’s not good when you’re building off an opening-round 73. Still, he finishes second in the FedExCup standings, No. 1 on the PGA Tour money list, and No. 1 on the PGA Tour wins list. His five victories this season were enough to earn him the PGA of America’s Player of the Year award, which is based on points. It’s Woods’ 11th PGA POY honor, and he also won the Vardon Trophy for lowest adjusted scoring average, his ninth time collecting that award. His kids didn’t know all that, but were still thrilled to see him after his Sunday 67:

Jordan Spieth gets cooler every week
We already thought Spieth was cool; then he goes out and ties for second at the Tour Championship. If it weren’t for Webb Simpson’s bogey-free 63 on Sunday, Spieth would have had the low round of the day. Instead, his 64 brought him from seven shots back to within one, but ultimately he finished three strokes behind Stenson. Not bad for the youngest player to qualify for the Tour Championship. Spieth jumped six spots in the final FedExCup standings, from 13th to seventh, which gives him an extra $700,000 bonus. Reminder: This kid is 20!

Keegan Bradley and Jason Dufner must’ve had a bet going
It was fitting that maybe the two best buds on Tour got paired together for the final day of the 2013 PGA Tour season. Bradley made the shot of the day, an eagle at No. 7, then promptly went Dufnering:

Dufner laughed last on the day, though, shooting a 65 to Bradley’s 67, and beating his foe by one stroke overall. He was quite pleased with his birdie at 18:

Yet, Bradley edged out Dufner in the final FedEx standings. He finished 18th and Dufner 19th.

Dustin Johnson can slug
Paulina Gretzky’s fiancé barely snuck into the Tour Championship; he tied for 62nd last week at the BMW Championship, which dropped him to 30th in the FedExCup standings, making him the last man in. But Johnson showed he belonged with a steady 68-68-67-69 showing — and he led the event in driving distance (322.9 yards), topping out at 368 yards. He finished in fifth place at 8-under, good enough to bump him 17 slots to 13th in the final FedEx standings. The $280,000 bonus he gets for that ranking should help him pay off the ring he put on the finger of Wayne Gretzky’s daughter:

Related Links: 5 Things You Need to Know About Henrik Stenson

Other Hot Links:
– Does It Drive: Will the iPhone Dominate on the Driving Range?
– 5 Great Golf Fail Videos
– Dick Fowler P.I. Bitten By the Love Trap