5 Things To Know About Billy Horschel 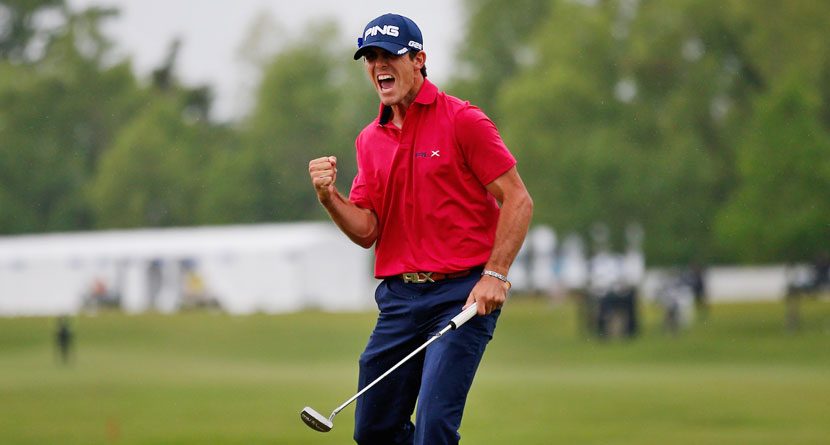 Billy Horschel won the Tour Championship on Sunday, and in doing so won $10 million and the FedExCup. He may not have been as well-known as his final-round playing partner, Rory McIlroy, but that doesn’t mean he’s not an interesting guy. In fact, he’s one of the craziest guys on tour.

Fresh off the biggest win of his career, here are five things to know about Horschel:

His Awesome Outfits
One thing that does get Horschel some recognition is his sense of fashion. From his octopus pants to his camo frog pants, the guy knows how to dress himself. He’s always outfitted in the sharpest looking clothes from RLX, often in orange and blue — the colors of his alma mater, Florida. He puts truth to the phrase “look good, play good.”

Even Better Celebrations
When Horschel captured his first PGA Tour victory at the Zurich Classic in 2013, the golf world took notice. His play put his name on the map, but so did his celebration on the final hole. Horschel wears his emotion on his sleeve, and it showed in New Orleans that day. Horschel drained a lengthy birdie putt on the final hole to seal his first victory, going into a fury of fist pumps and screams. Put it this way: The guy knows how to celebrate a win.

Chooses $10 Million Over Birth Of Child
One of the biggest storylines of the Tour Championship was the situation Horschel is in regarding his first child. His wife is pregnant and could have gone into labor at any moment. Horschel spoke about the situation after his first round, taking a different approach than most in the past. He said he’d continue playing if his wife did go into labor, and he didn’t even want to know if she did.

“Yeah, my wife and I are due two weeks from Saturday. Expecting our first child, a little girl,” Horschel said after his round Thursday. “And, I mean, on the golf course I’m not thinking about it. We have decided that if she goes into labor while I’m playing, I will just keep playing, because $10 million is a lot of money and I’m not going to pass that by. And I’ll just fly home after the round and fly back couple hours later, spend some time with them.”

He may get some criticism for the decision, but $10 million is life-changing money, and he realizes that. He tells it how it is, with absolutely no sugar-coating involved.

Predicted His First PGA Tour Win
When Horschel earned his PGA Tour card in 2012 after a wrist injury hindered his play in the years prior, he made a bold prediction that he’d secure his first victory on the PGA Tour in 2013. It may have seemed like an unproven golfer making a wild prediction at the time, but Horschel was aware of his ability, and he made good on his bet. He would of course go on to win the Zurich Classic that year, making his presence known to his fellow competitors. He’s followed up that victory with a solid 2014 campaign, finishing in the top 10 four times, while also winning the BMW Championship.

Rivalry With Rory
Horschel’s rivalry with McIlroy stems back longer than most seem to think. The two dueled for the FedExCup and $10 million on Sunday, but it’s not the first time they went head-to-head. The 2007 Walker Cup brought the two together where they played against each other three times, and McIlroy wasn’t particularly fond of Horschel’s “antics” at the time.

“His antics really pissed me off,” McIlroy said. “He was so loud and so obnoxious.”