5 Things To Know About The PGA Tour’s Newest Members 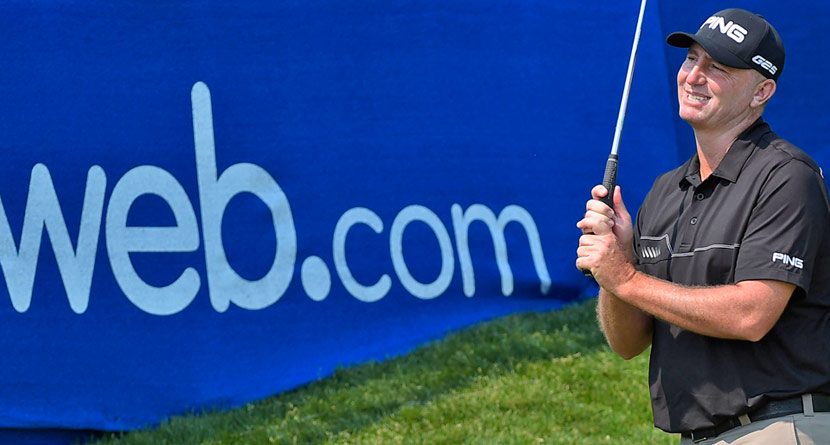 The Web.com Tour wrapped up its regular season Sunday and with it, 25 players officially earned their PGA Tour card for the 2014-2015 season.

The top 25 finishers on the Web.com Tour money list received their cards following the completion of the Portland (Ore.) Open on Sunday and the list of soon-to-be PGA Tour rookies and returnees carries with it a number of interesting storylines.

Here are five interesting facts about the newest class of Web.com Tour players moving up to the PGA Tour:

Gore Returns To Tour
Golf fans will remember Jason Gore. After playing with Retief Goosen in the final grouping at the 2005 U.S. Open, Gore went on to win the 84 Lumber Classic. In 2009, he ventured back to the then-Nationwide Tour and hasn’t returned to the PGA Tour full-time since. With his sixth-place money list finish, Gore is now back on Tour.

Karma Returns The Favor
Blayne Barber made headlines last year when he disqualified himself from Q-school after realizing he signed an incorrect scorecard in the first stage of qualifying. The cosmos returned that good faith Sunday when the former Auburn All-American and 2011 U.S. Walker Cup team member earned one of the 25 PGA Tour cards up for grab. In earning his card, Barber made nearly $270,000 this season and won the Web.com’s South Georgia Classic.

Baba Booey Redux?
A high school friend and teammate of Keegan Bradley, Jon Curran had a solid year on the Web.com Tour. He won in Brazil, had three top 10s and earned more than $230,000. Most importantly, the 27-year-old former Vanderbilt star, who once served as the No. 1 player ahead of Bradley on the Hopkinton (Mass.) High School squad, has reached the PGA Tour.

Dollars and Cents Matter
Just ask Sebastian Cappellen and Kyle Reifers. The latter finished 25th on the money list after the finale thanks to a birdie on the 17th hole in his final round. The birdie moved him into a tie for 21st place and into 25th on the overall money list over Cappellen. The difference? Less than $1,500.

It Pays To Go To College
The PGA Tour is littered with former college stars. From Tiger Woods to Phil Mickelson, Rickie Fowler and beyond, many of the game’s best earned their stripes in school. Two of the most promising golfers in this crop of Web.com Tour graduates are in the same boat. Justin Thomas, who won an NCAA Championship and numerous personal accolades while at Alabama, and Max Homa, who won the NCAA’s individual title in 2013 as a member of the record-setting Cal Bears, are moving on to the PGA Tour after strong years on the Web.com Tour.