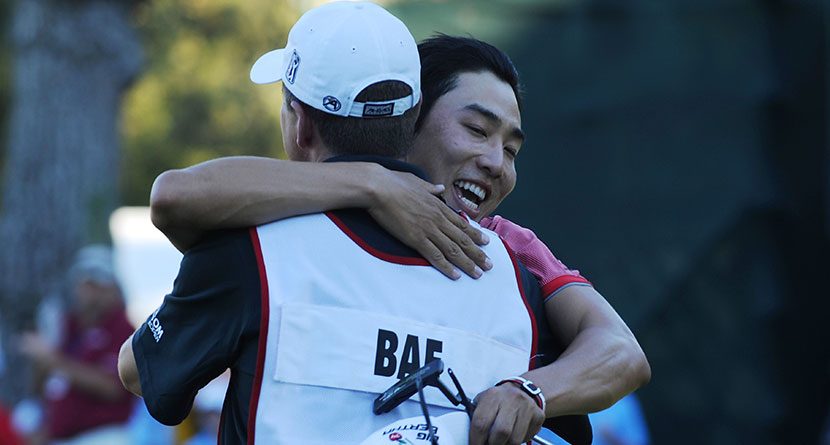 The 2014-2105 PGA Tour season is officially underway — believe it or not. Sang-Moon Bae won the season’s first event Sunday at Silverado in Napa, Calif., by two shots over Steven Bowditch.

With a very early lead in the FedExCup standings, Bae is off and running as the year’s first champion. While there’s still plenty to learn about the PGA Tour this season, here are five things we learned from the Frys.com Open:

Sang-Moon Bae Was In Control
There weren’t too many theatrics during the final day of play in Napa and that’s a testament to Bae’s solid play. No one got within two shots of his Sunday lead and when he slipped up a bit with a pair of bogeys late in the round, he gathered himself and made par on the final four holes to win his second PGA Tour event. On Saturday, he reeled off five straight birdies and finished by going birdie-par-eagle. He did so, of course, with a terrific swing showcased in this slow-motion video:

A slow-motion look at the gorgeous golf swing of Sang-Moon Bae, who has built a 5-shot lead at the @frysopengolf: http://t.co/mapk0sTGJG

Zac Blair Is A Name We Should Get Used To
One of the positives of the early-season events is the chance for young players to showcase their skills. One youngster poised for the prime-time is Zac Blair. A former BYU star who had a stellar amateur career, Blair finished 10-under and inside the top 15 in his first event as a full-fledged card member. Blair was among the 50 Web.com Tour graduates now on tour.

Brooks Koepka Is Ready For The Spotlight
Hardcore golf fans — and readers of ours located in Europe — know all about Koepka. By this time next year, it’s safe to say the rest of the golf world will, too. Koepka made a splash on the Challenge Tour with four wins from 2012-2013. Last year, he made 14 PGA Tour starts, made 12 cuts and earned $1, 043,115. This year, he’s off to a good start with a T-8 finish at Silverado.

Jarrod Lyle Isn’t Just Happy To Be Back
It looks like he’s here to play. In his first event following a second battle with leukemia, Lyle put forth a strong showing, shooting 72-70-71-70 to finish tied for 31st place. He’ll be back at it again next week a the Shriners Open and ready to get back in the swing of things — and contend — even more.

Aces Were Wild
There were two aces this week at the Frys.com Open. Billy Hurley III had a hole-in-one with a 6-iron on the 182-yard 15th hole while Mark Hubbard buried a 5-iron on the 198-yard seventh. The end result wasn’t too great for Hurley III (missed cut) or Hubbard (T-53) but they’ll no doubt look back at their opening week with a smile — and a golf ball for their personal collection