5 Things you Need to Know About J.J. Henry 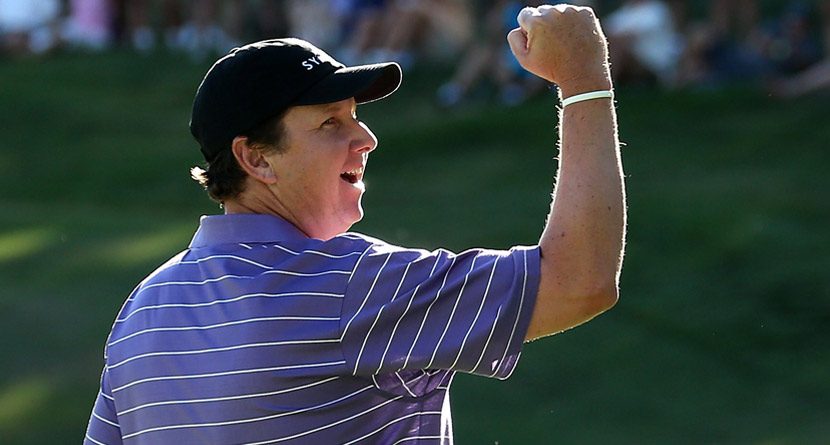 While the Women’s British Open tees off at St. Andrews in Scotland, and the World Golf Championships-Bridgestone Invitational revs up in Ohio, J.J. Henry is out west defending his title at the PGA Tour’s Reno-Tahoe Open in Reno, Nev., at Montreux Golf and Country Club.

The Connecticut native and Back9Network ambassador won last year by posting a 43. Wait, what? That would be a +43 in the Modified Stableford scoring system, which awards points for eagles, birdies, etc., and subtracts points for bogeys and anything worse (8 for double eagle, 5 for eagle, 2 for birdie, 0 for par, -1 for bogey, and -3 for double bogey or worse).

Henry’s victory last year at the PGA Tour’s only Modified Stableford event marked the second of his career, joining his 2006 triumph at the Buick Championship. Another victory this week in Reno would push Henry over the $1 million mark in season earnings.

Here are five things you need to know about Reno-Tahoe’s defending champ:

1) His Benz didn’t treat him well this week
Upon arriving at Montreux, Henry was handed the keys to a brand-new Mercedes Benz for a courtesy car. He and his manager hopped in on Monday to take a drive over to Lake Tahoe for a sponsor event, but as they as began to ascend the Mount Rose Summit, the Benz broke down. Luckily, they weren’t far along in their journey, so a new car from Montreux was driven to them, and Henry made it to his sponsor event on time. “It was kind of an adventurous hour and a half,” Henry told us.

2) The man enjoys Connecticut
The best finish of Henry’s season was a T5 at the Travelers Championship just outside of Hartford, Conn., which sits about an hour away from Fairfield, where Henry was born. He attended Fairfield High School and became a three-time Connecticut State Amateur champion (1994, ’95 and ’98). In ’98, his final year of college at Texas Christian University, Henry was honored as the state’s Male Athlete of the Year as named by the Connecticut Sportswriters Association. He was also the New England Amateur champion that year.

3) Big things happened in Texas
Also as a senior at TCU, Henry earned first-team NCAA All-American and Co-Player of the Year honors. He has remained in Texas ever since as he met his wife, Lee, while attending TCU. The couple has two sons: Connor, who is 8 years old and involved in numerous sports, including golf; and Carson, who is 4.

4) The Henry’s know how to golf
Henry’ s grandfather, Ronald J. Henry, also played at Fairfield High, where he was a teammate of Julius Boros’, who went on to win two U.S. Opens (’52 and ’63) and a PGA Championship (’68). J.J.’s father, Ronald J. Henry Jr., competed in two U.S. and six British amateur championships, and later won six men’s titles at Fairfield’s Patterson Club. But J.J., whose full name is actually Ronald Henry III, surpassed his namesakes by reaching the PGA Tour, for which he has earned his card each year since 2001.

5) He sets his fantasy football team before golfing on fall Sundays
Henry admits to being very serious about his fantasy football league, in which he competes against his brothers and friends who are scattered all about the country. Small amounts of money are exchanged amongst the group, but “it’s all about the smack talk,” Henry says. He makes sure to set the lineup for his team, “Armchair’s Assassins,” before playing the final round of a golf tournament.