5 Things You Need to Know About Jordan Spieth 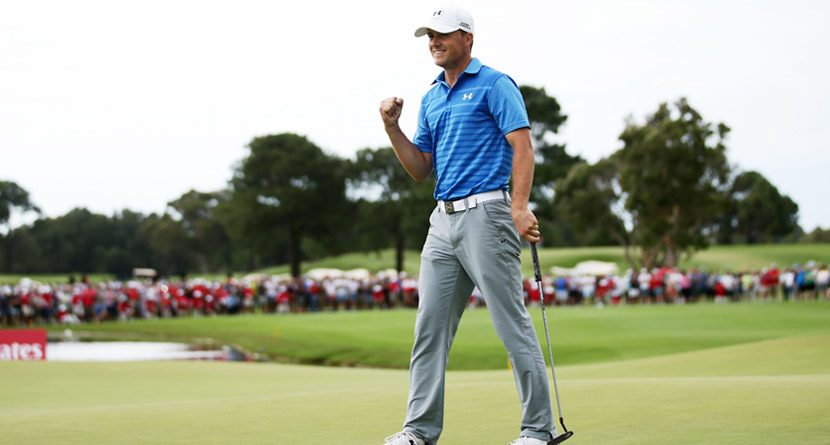 What were you doing when you were 21? Working retail at the mall? Constantly looking out for the next college house party? Driving the 15-year-old car your older sister passed down to you?

Chances are you were not among the top 10 in your field and already a millionaire many times over. That’s okay, not everyone can be Jordan Spieth. With his back-to-back wins at the Australian Open and Hero World Challenge, which he won by 10 strokes, finishing at 26-under for the tournament, Spieth is the talk of golf.

Here are five things you need to know Jordan Spieth:

He’s Not Afraid To Set Lofty Goals
Upon turning pro in December 2012, Spieth stated his goal was to make the FedExCup playoffs. Yet, the series of tournaments is open only to PGA Tour members. Spieth – who never went to Q school, going straight from the University of Texas to needing sponsor exemptions for PGA events – officially became one with his John Deere Classic win, and the points he earned previously in 15 events retroactively counted in his point total. That shot him to 11th in the FedEx Cup standings as a 20-year-old!

He’s Young, But Not To PGA Tour Events
Prior to making it big on tour, Spieth appeared in eight events, making the cut in five of those events. At the 2010 HP Byron Nelson Championship in his hometown of Dallas – his PGA Tour debut – he became the sixth youngest player to make the cut at a PGA Tour tournament.

He Had An Amazing Amateur Career
The low amateur at the 2012 U.S. Open (he tied for 21st at 7-over), Spieth captured U.S. Junior Amateur (under 18) titles in 2009 and ’11. The only other male to win multiple U.S. Junior Amateurs: Tiger Woods. But a teenaged Woods never won a PGA Tour event. Neither did Phil Mickelson, nor Rory McIlroy.

He Excelled In His Short Collegiate Career
As a freshman in 2012, Spieth led Texas to its first men’s golf national title since 1972. The much-anticipated matchup in the Texas-Alabama national championship showdown was between Spieth and ‘Bama’s Justin Thomas. Spieth won 3 & 2. Thomas remains in school and is ranked No. 12 in the world amateur rankings.

Related Links: 9 Reasons Why Jordan Spieth is the Coolest 21-Year-Old Ever