5 Things You Need to Know About Patrick Reed 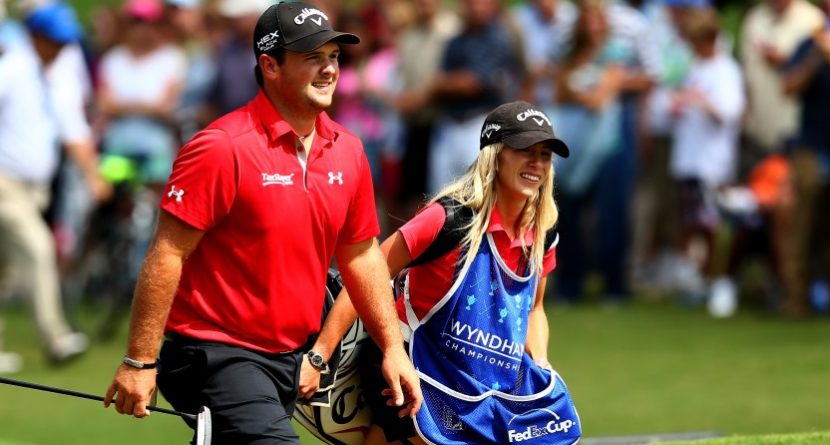 Patrick Reed, winner of the WGC-Cadillac Championship on Sunday, is not exactly a newcomer to the PGA Tour. The 23-year-old is now a three-time winner on tour and ranked 20th in the world. But his cocky/confident comments to a live TV audience after the triumph sent a lot more people to learn his name. As of this posting, Patrick Reed is No. 2 on Google’s “Hot Searches” list.

So here you go Googlers, five things you need to know about Patrick Reed:

He really likes Tiger Woods, and likes to dress like him
You may have noticed that Reed sported Woods’ signature Sunday look – red shirt, black pants, black hat – at Doral, but that’s neither an accident nor a new thing. Reed wore similar attire when he won the Wyndham Championship (remember his shot in the playoff?) in August and the Humana Challenge in January. It’s a very intentional move to dress like his favorite player. In college, Reed listed Woods as his favorite player, the person he’d most like to trade places with for one day, the person he’d most like to have dinner with, and the first member of his dream foursome.

He’s not on Twitter, so he’s not seeing your witty comments
If you didn’t see Reed’s post-round comments, basically he said he thinks he’s a top-five player. That sent Twitter into a tizzy:

Credit to Patrick Reed. He’s the only player to successfully squash post tournament coverage of Tigers every move! PATRICK REED

I liked Patrick Reed until he opened his mouth. Good win, bad interview. Patrick and Poulter need to go hang out. #5 and #2.

Good thing Patrick Reed showed more control and poise on the course than in that NBC interview, or he wouldn’t have won.

That interview just proved it. Patrick Reed is a dork. I’ve never heard a guy recite his resumé in an interview. #pga

He keeps his caddies in the family
Reed’s caddie this season is Kessler Karain, a newbie looper. The only reason he’s on the bag is because his sister, Justine, is pregnant with Reed’s first child, due in May. When she’s able, Reed’s wife will be back on his bag, hopefully in time for the PGA Championship in August. Justine is a 5-foot-1 blonde – far from your typical caddie – but knows her man better than anyone else. Reed turned pro in 2011, Justine began caddying for him in 2012, and they were married later that year. Tying the knot was easy compared to what they’d been through in 2012 – Patrick didn’t have his PGA Tour card so he often tried qualifying for events through the Monday qualifiers. Justine would drive them from tournament to tournament, and he qualified for a crazy six events through Monday qualifying. He earned his card in Q-school later that year.

He knows Augusta well
Reed’s already taken in more than $3 million this year (more winnings than the rest of his career combined), is one of five players who have three PGA Tour victories before turning 24, and is the youngest player to win a World Golf Championship. Yet he’s never even appeared in a major. But he’ll get that chance next month when he tees it up at the Masters in a town he’s quite familiar with. Reed played collegiate golf at Georgia before transferring to Augusta State, which he led to two NCAA titles. Individually, Reed went 6-0 in match play over two years at the NCAAs, and twice was a first-team All-American.

The Reed’s like nice rides
Reed is enjoying only his second year at the top level of golf, but he’s already driving around like a seasoned vet. He recently told Sports Illustrated Golf Digital that he owns a CLS AMG 63 Mercedes and got a SL 550 Mercedes for Justine. MSRP starts right around $100,000 for both of those cars. Other Hot Links:
– Pix of the Week: WGC-Cadillac & More
– President Obama, Ahmad Rashad Hit The Links
– Ian Poulter Rips Hideki Matsuyama on Twitter
– Inside Look at Gary Player Villa at Trump National Doral
– The Back of This Kid’s Head is Ridiculous