5 Things You Need to Know about Shiv Kapur 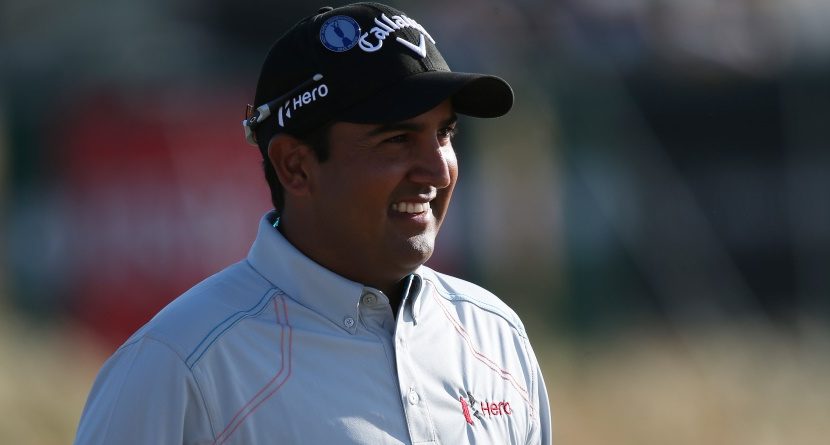 Taking the (very) early lead at the Open Championship on Thursday was Shiv Kapur. In other news, Rory McIlroy… wait, what’s that you say? Who is Shiv Kapur?

Oh, well let us introduce you. We totally knew all about the Indian golfer well before he nailed six birdies over his first seven holes at Muirfield. (Just kidding. We just finished Googling him too.)

Here are five things you need to know about Shiv Kapur:

1) The 31-year-old is the fourth-ranked golfer from India. That’s pretty good considering the country is the second-most populous in the world. Except that it’s really not that great, because it puts Kapur at 210th in the world.

2) Kapur told the Times of India earlier this week that he “wanted to play a practice round with Nick Faldo, which I did on Monday, and if this a sign of good things coming my way, who knows, I might fulfill my dream of walking alongside Tiger (Woods).” After one round, Kapur is 3-under-par and Tiger is 2-under. Zach Johnson’s the leader at 5-under.

3) After qualifying through the Local Final Qualifying event in Dunbar, Scotland, two weeks ago, Kapur is making his second major appearance; his first was the 2006 Open Championship, where he missed the cut by two strokes. As long as he doesn’t go kaput, Kapur is in good position to record the best Open performance ever by an Indian –Jyoti Randhawa tied for 27th in 2004.

4) Kapur played collegiate golf at Purdue, where he was an honorable mention All-American after his sophomore year, during which he placed 13th at the 2002 NCAA Championships.

5) Kapur enjoys “The Killers.” When you hop on shivkapur.com, the 2008 hit “Human” immediately begins playing. You know, “Are we human, or are we dancer?” In case you’re also a Killers fan, here’s the music video:

Related Links: 5 Things You Need to Know about Jordan Spieth