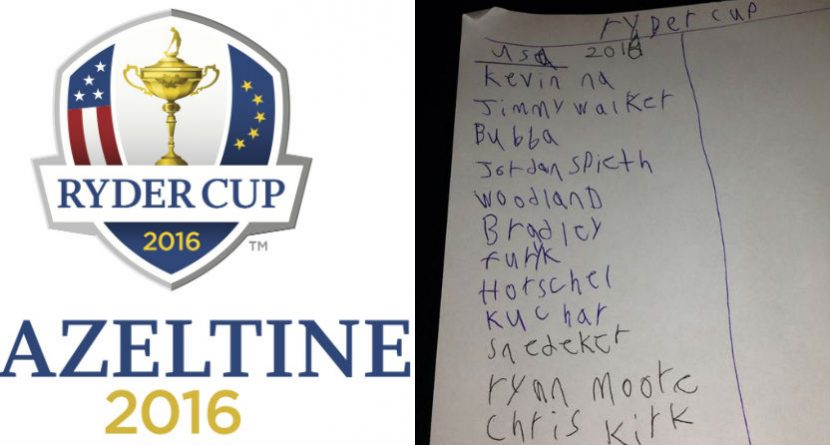 With the 2014 Ryder Cup complete for a whole 24 hours now, it’s none too early to begin the debate about who should compete in the 2016 Ryder Cup. That one will take place at Hazeltine National Golf Club in Minnesota, where the U.S. hopes to kill Europe’s three-match winning streak.

The speculation was kicked off late Sunday by a 7-year-old. His father tweeted the handwritten U.S. lineup to Billy Horschel, presumably because the FedExCup champion should have been on this year’s squad. Billy Ho approved and retweeted:

@BillyHo_Golf my 7 year old was upset about the loss, so he already selected the 2016 team. Looks good to me pic.twitter.com/RCYiFzOSwZ

Yeah, it’s not bad. Jimmy Walker and Jordan Spieth performed well in their Ryder Cup debuts this year, while Horschel and Chris Kirk were a couple guys who justifiably could’ve/should’ve been included on the squad.

Of course, there are a few notable omissions. Patrick Reed’s bold and brave debut surely earned him a spot on the 2016 squad, at least via a captain’s pick if he doesn’t make his own way on. It’s hard to image Rickie Fowler not earning a berth. And no Tiger Woods or Phil Mickelson? They’re not getting any younger, so they very well could be injured around this time in 2016, but there’s no way a healthy Woods and Mickelson both get left off the next Ryder Cup side.

But still, fresh off a disappointing loss that upset the youngster, he showed he knows his golf.