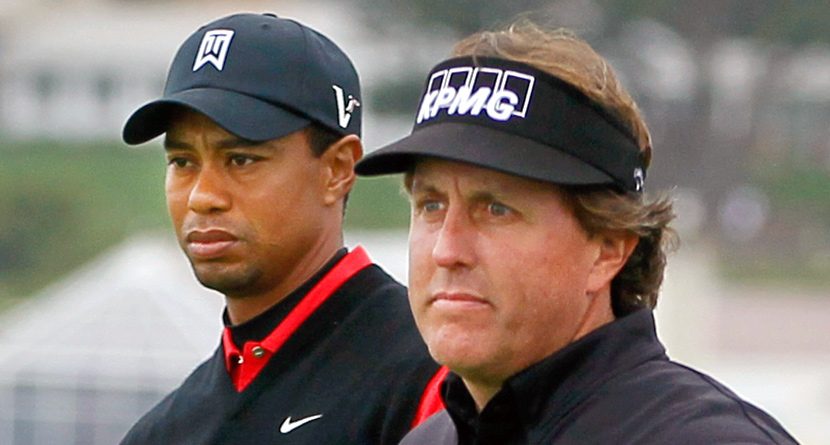 Those in charge of scheduling life sure do it right this time of year. Few things beat a long weekend, and nothing beats a long weekend with family and friends, seemingly endless piles of food, and lots and lots of football. All but immobilized and in a left-over-food coma on the couch watching Michigan vs. Ohio St., Georgia vs. Georgia Tech, Alabama vs. Auburn and more, it got me thinking about other great rivalries, especially those in golf. See if you agree:

This is probably the most popular rivalry on this list and the one most fresh in our minds. For a while, it wasn’t even much of a rivalry. Tiger killed Phil in nearly every category. From Tiger’s rookie year in 1996 until 2004, Tiger won eight majors and Phil was the best player never to win one. Since then, Tiger only leads Phil by one (6-5) and since 2008, Phil is up 4-0. The turn in momentum was perhaps no better exemplified than at the AT&T National at Pebble Beach in 2012. Paired together for the final round, Phil fired a 64 to capture his 40th career win while Tiger shot a 75, 11 shots worse than Lefty.

One of the most difficult titles in all of sports to be saddled with is “next.” The next Jordan, the next Jerry Rice, whatever. In golf, Rory McIlroy is supposed to be the next Tiger Woods. Some would argue he’s already here. Rors has won two majors, both by eight strokes. Since McIlroy turned pro, Tiger has been shut out in majors. Rory even ascended to world No. 1 and amassed 10 world-wide wins since turning pro in 2007. Since then, Tiger has a slight advantage in overall wins, but not in the ones that really count, especially to Tiger.

For most of the 60s, Arnold Palmer and Jack Nicklaus were golf. They traded blows on the course on their sport’s biggest stage and neither gave an inch. From 1962 to 1966, they were the only men to win the green jacket at Augusta and have 10 of the coveted jackets between them. Before Jack, Arnie dominated the sport and was the undisputed King. After Palmer, Nicklaus reigned, but for nearly a decade, the two heavyweights locked horns nearly every week, giving the sports world one of the greatest rivalries ever.

Perhaps it’s because of national pride but the 730-day (or so) break between each Ryder Cup doesn’t seem to cool any bit of this rivalry. For decades, the Americans dominated the event and there was no real vitriol. After three consecutive wins by Europe, all of that changed in 1991 with the famous War on the Shore at Kiawah Island and carried through to the United States’ stunning upset at Brookline. The Europeans have also authored their share of triumphant (or heartbreaking) moments, most recently in 2012 at Medinah, when they overcame the largest final-day deficit to retain the cup. This tournament hasn’t just created a rivalry between two continents, but also between individuals. Most notably, Paul Azinger and Seve Ballesteros.

While this rivalry never really developed or continued anywhere outside of Ryder Cup competition, there were enough contentious moments and comments during them to warrant a place on the list. It started in 1989, when Azinger called out Ballesteros for trying to change out a scuffed golf ball. According to reports, Ballesteros asked Azinger, “Is that the way you want to play today?” and then challenged the legality of an Azinger drop later in the round. In 1991, the contentiousness continued with accusations of gamesmanship on both sides and famously ended with Ballesteros saying, “The American team has 11 nice guys. And Paul Azinger.”

This is one of the greatest rivalries in all of sport; at least in Sergio’s mind. No one on the planet is subject to more bad breaks, chaos or luck than Sergio Garcia … according to Sergio Garcia. After missing a putt to clinch his first-ever major victory at the 2012 British Open, Garcia said, “It’s not the first time, unfortunately. I don’t know … I’m playing against a lot of guys out there, more than the field.” The loss to B9N’s own Padraig Harrington resulted in a small feud between the two, which nearly made this list, but Garcia is famous for letting everything else but his competitors get the best of him. Be it the fans at Bethpage Black or Tiger pulling his weapon of choice while Sergio is hitting, there is always someone or something else responsible with the inevitable unraveling of Sergio. This, of course, is a shame for someone so talented who, along with his tirades, also gives us moments like this one from Bay Hill:

After Arnold Palmer claimed his final major victory in 1970, it was time for someone else to step up and challenge the Golden Bear for golf supremacy. That man was Lee Trevino, who won six major titles during Jack’s reign at the top, four of those coming directly at Nicklaus’ expense. The most memorable of these was at Merion in the 1971 U.S. Open. Trevino went head-to-head with Jack and beat him by three in an 18-hole playoff to claim his second U.S. Open crown in four years. Trevino — who famously told Tony Jacklin, “You don’t have to talk, Tony, just listen,” in regards to his conversation during the final round of the 1972 Open Championship — also provided this gem of a moment before his playoff with Jack in 1971:

It could be said that Greg Norman is one of the more tragic figures in golf history. The poor guy had a not-so-awesome “slam” named after him following his 1986 season where he led every major after 54 holes, but only managed to win one. So many times during the late 80s and 90s Norman’s foil was Englishman Nick Faldo. Faldo won both the Masters and the British Open three times during the Norman era, and was world No. 1 for 97 weeks to Norman’s 331 during that time. It seems that if Norman was the best of his generation, Faldo was the most successful. Many of the aforementioned rivalries were ones that never really contained much personal vitriol off the course, but in the case of Sarazen and Hagen, that was not the case. Much was made of Walter Hagen skipping the PGA Championship to avoid playing Gene Sarazen and after the incident there was some, uh, contempt for one another when they met at a match in October of 1922. Sarazen, who was 20 during the incident, said of Hagen, “I didn’t like the way he kept calling me ‘kid.’ I was a champion and I wanted Hagen to respect me as a champion.” Hagen finished his career with 11 major titles to the Kid’s seven. Other Hot Links:
– TV Preview: Back9Network Original Programming
– Lindsey Vonn Is Back On Skis, Feeling Good
– Does It Drive: Playstation 4 vs. Xbox One (Video)