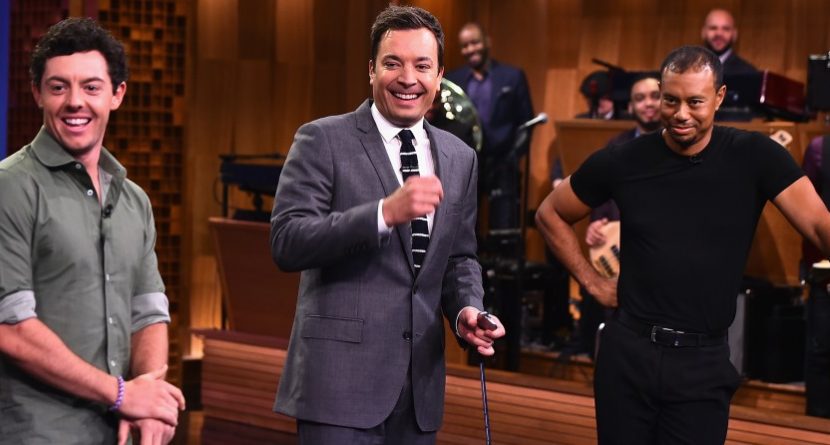 Not surprisingly, Tiger and Rory’s appearance immediately jumped to the top of our list of the most memorable golfer appearances on talk shows:

Tiger Woods, Rory McIlroy on “The Tonight Show Starring Jimmy Fallon”
The much-anticipated appearance of golf’s biggest superstars didn’t disappoint with Fallon — although it would’ve been great to see Woods take part in “Facebreakers” as well. Instead, McIlroy smoked Fallon and an injured Woods just made fun of the host:

Tiger Woods on “The Ellen DeGeneres Show”
Ellen isn’t one to just sit and talk with celebrities; she’s a bit more creative. When Woods appeared on her show, they held a hitting contest. Tiger was Tiger, and Ellen “shocked herself”:

Justin Rose on “Late Show With David Letterman”
After picking up the 2013 U.S. Open at Merion near Philadelphia, Rose made his way up to NYC to read a Letterman top-10 list: Questions People Ask Me About Golf:

Tiger Woods on “Late Night with Jimmy Fallon”
It’s a shame that when Fallon made the move to the coveted “Tonight Show” slot, replacing Jay Leno, NBC took down tons of old Leno video (such as Watson smashing fruit), as well as Fallon video from his old show (such as a previous appearance by McIlroy). Somehow, though, this clip of a partial segment survived – Fallon, Amy Poehler and Woods playing the new “Tiger Woods PGA Tour 12: The Masters” video game: